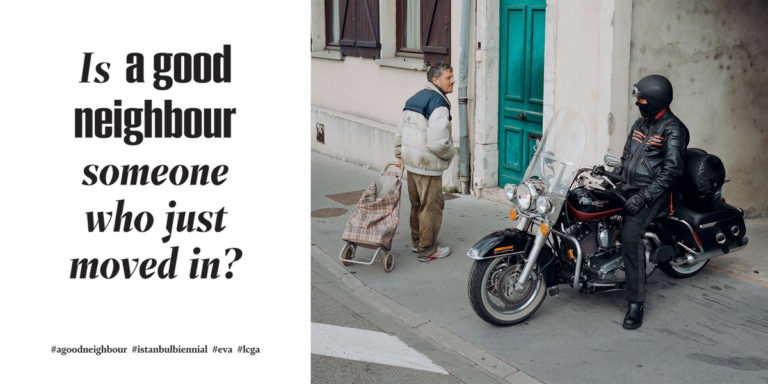 The 15th Istanbul Biennial in Limerick

The 15th Istanbul Biennial in Limerick

The 15th Istanbul Biennial, curated by the artist duo Elmgreen & Dragset, entitled “a good neighbour”, will deal with multiple notions of home and neighbourhoods, exploring how living modes in our private spheres have changed throughout the past decades. The biennial will approach home as an indicator of diverse identities and a vehicle for self-expression, and neighbourhood as a micro-universe exemplifying some of the challenges that are faced in terms of co-existence today. Against this backdrop, the 15th Istanbul Biennial initiates an international billboard project in anticipation of the exhibition, and spreads its theme of “a good neighbour” to many different cities around the world from Manchester to Sydney, and from Havana to Delhi, as of February 2017.

The international billboard campaign is realised through collaborations with multiple cultural institutions worldwide and will display a carefully curated selection of photographs by Lukas Wassmann. Wassmann’s photographs, which capture unexpected encounters, will be paired with questions asking what makes a good neighbour. The project is a collaboration between the curators Elmgreen & Dragset, graphic designer Rupert Smyth, and artist Lukas Wassmann, questioning the ways in which neighbourhoods have changed all around the world.

The 15th edition of the Istanbul Biennial, organised by Istanbul Foundation for Culture and Arts (İKSV) since 1987, will take place from 16 September to 12 November. Sponsored by Koç Holding, the 15th Istanbul Biennial can be visited free of charge for two months, and will include a public programme comprising of performances, talks and the billboard project.

The Home of St Patrick Festival, which is kindly supported by Tourism Ni, launched the biennial’s international billboard project in Armagh, Ballynahinch, Belfast, Downpatrick and Newry in Northern Ireland, on 27 February – 12 March.