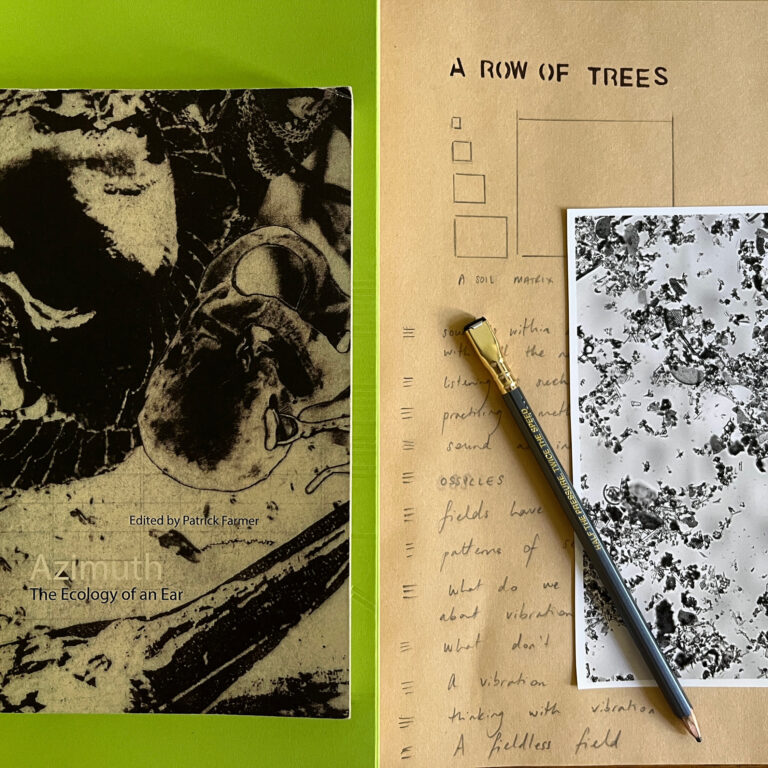 Extract from artist notebook, 2022. Image courtesy of the artist.

Sharon Phelan  is one of six artists working with EVA International as part of the ‘Platform Commissions’ initiative of the 40th EVA International (31 August – 29 October 2023). In this Q&A, the artist briefly introduces the project and her working practice.

EVA: What are some of the key themes or ideas that are explored within your artistic practice?

Sharon Phelan: Sound, voice and listening are recurring themes in my practice. I return again and again to the sonic figure of Echo as an informing presence. Lately, thinking with Echo has helped deconstruct ideas on the nature of time, citation as feminist memory, listening minus a stable beginning, and cumulative agency; ideas which found their way into a recent talk I gave for Sonic Displacements at Project Arts Centre.

EVA: Could you expand upon the materials and methodologies you tend to be drawn towards within your practice?

SP: I think of my practice as being a composite wave, or a rehearsal, of words, images, sounds and environments, and am drawn towards sonic imaginings such as Kodwo Eshun’s concept of ‘sonic fiction’, proposed in his book More Brilliant Than the Sun. Sonic fictions bring together artefacts and processes which speak to historicity and mythology but fall short of the satisfactions of narrative. They operate in the realm of speculation, rhythm, vibration, moments of transition, the in-between and the unknown. Other influences in this regard include Donna Haraway’s SF practice and Trinh T. Minh-ha’s ‘speaking nearby’.

EVA: Could you introduce your upcoming Platform Commissions project that will be presented as part of the 40th EVA International in Autumn 2023?

SP: Working with the title, Citizen’s United: A Speech Act, my upcoming Platform Commissions project proposes a sonic fiction that reads across artificial entities, synthetic voices and communicative capitalism. By exploring ways in which speech has become distinct from the individual, and language, listening and being-together has been co-opted for capitalist modes of production, the work draws on research into the politics of citizenship and its contingent, (sonic) traces.

EVA: Are there any particular research and development processes or approaches that you generally engage in when preparing for a new commission or for the production of a new work?

SP: For me, the production of new work tends to emerge from ‘study’ as a practice — whether made in response to an artist-led workshop, a reading group, an invitation, an exhibition, a site, or a lecture series. It’s a type of practice that Stefano Harney describes as a gathering of intensities. From there the work develops as I attempt to make sense of something at a deeper level or as I try to get to the heart of the matter.

EVA: Could you expand upon any research plans that you hope to undertake during the development of this project?

SP: For this project, so far, I’ve been enjoying gathering and reading aloud artist scripts, scores, essays, poems; textual material for performance, film or sound. At a later stage I will be conducting research interviews as well as field recordings. I’m also looking at various text-to-speech synthesis models while slowly building a research library on sound and agency.

EVA: Are you working towards any other upcoming projects, residences or exhibitions currently?

SP: I recently wrote a palimtext, called SOIL MATRIX, which will be published later this year in the Sonic Art Research Unit journal, A Row of Trees, edited by Patrick Farmer. And I am currently working on a commission from the artist Cobi Van Tonder to create a virtual sculpture for her research project, Acoustic Atlas. Aside from that, I will be taking part in a couple of music gigs over the next few months, one of which will be in the reverberant Sculpture Gallery at the Hugh Lane in September, and another at Modern Art Oxford later in the year.

Biography
Sharon Phelan is an artist, writer and musician specialising in digital media and sound. Her practice researches the resonance and poetics of place, often through site-responsive and collaborative projects. Recent projects include Alternating Current (curated by Dublin Digital Radio, 2021); Abolition A-Z (produced by Alejandro Van Zandt-Escobar & Ivan Robirosa, 2021); A Resonant Landscape(curated by Mark Garry, Limerick City Gallery of Art, 2021); and Woman in the Machine (co-created with VISUAL and Carlow Arts Festival, 2021).