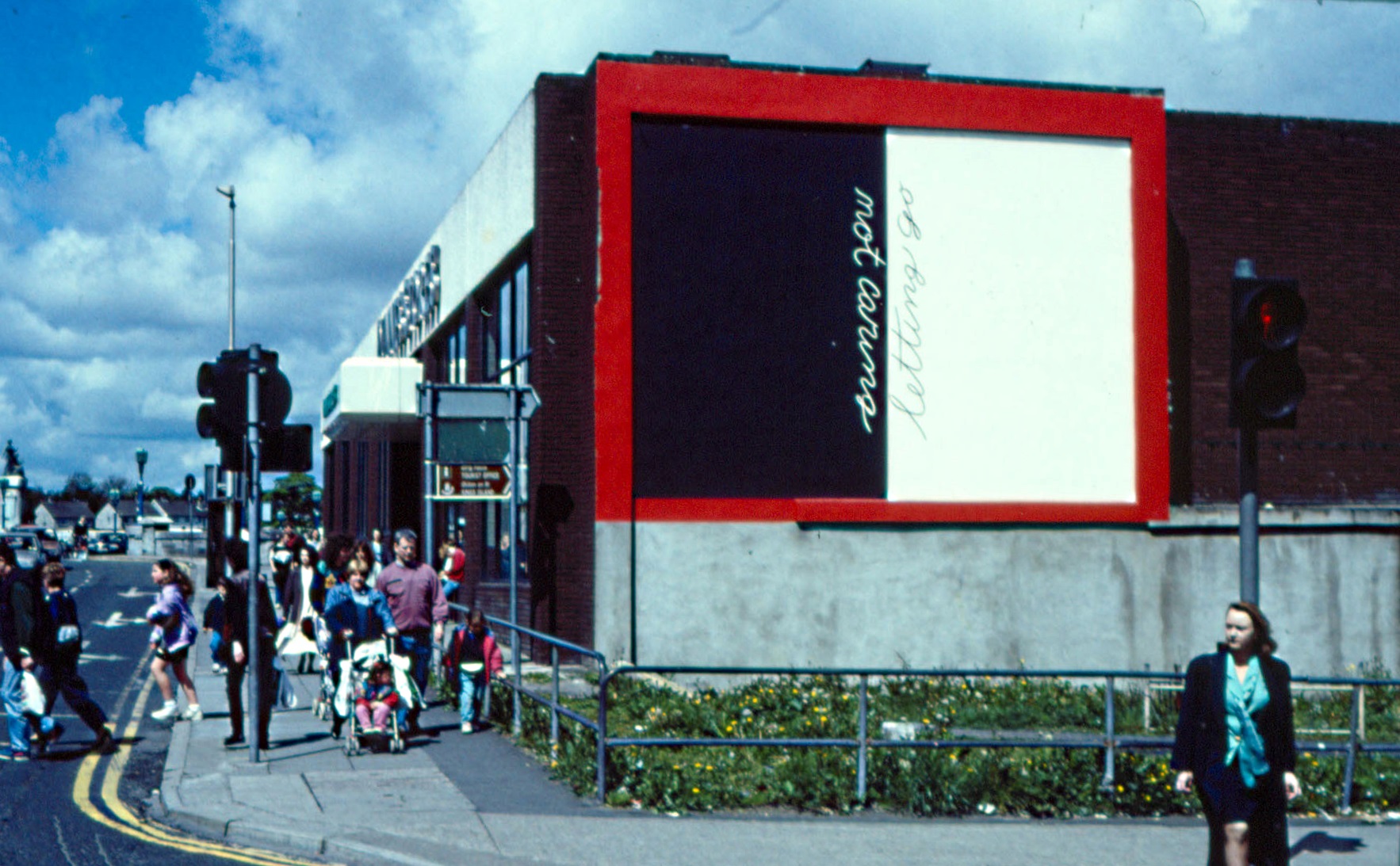 Rear View Mirror #3 is an interview between Siobhan O’Reilly (Care of Collections and Exhibitions, Limerick City Gallery of Art) and Sara Dowling (EVA Curatorial Scholar 2017 – 2019). The interview is the third published text of the Rear View Mirror series, an ongoing research project that aims to explore and unpack EVA’s history since 1977.

Sara Dowling: Siobhan, can you tell me about your introduction to EVA in Limerick City Gallery of Art?

Siobhan O’Reilly: I am currently working in Limerick City Gallery of Art, but I worked with EVA from the mid-eighties, from 1982/83. Paul O’ Reilly (my father) was the Administrator and we were brought in as helpers, so we as siblings had very early exposure to the visual arts. We didn’t necessarily meet a lot of the artists, but we interacted with the artworks and met some of the curators. I helped alongside my father, mother and sisters, and we would unwrap the artworks in the storage units, and prepare them for the curators to come and look through them. We’d then be taken back to re-wrap the artworks.

EVA was one of the prime exhibitions in the schedule of the City Library until the whole building became the City Gallery in 1985. My earliest memories of helping curators would have been in 1985/6, my first year in the art college in Limerick..

It was interesting to help with the unwrapping of the artworks for the curator, to make the selection of artworks submitted through the Open Call process by artists from all over Ireland, some established artists as well as young artists and even some student works. We got to see all the artworks submitted, even those that weren’t selected for the main EVA exhibition. You could get up to 500 or 600 artworks from all media, but mostly painting, print, sculpture and photography, not even necessarily the best of their work – but artworks for consideration unhung or unpolished. I think for me, seeing these artworks helped me develop an appreciation for the medium and labour involved in making an artwork and helped me choose the direction of printmaking in art college.

All through college I helped with installation, opening nights or launches at the gallery and by invigilating the EVA exhibitions over weekends.  EVA relied a lot on volunteers and helpers to invigilate and keep the gallery spaces open, which became more apparent when EVA went outside the main venue at Limerick City Gallery of Art and into other off-site venues in the city.

Over the years my involvement and responsibility grew within EVA. From graduating in 1990 through to 2000 when I started officially at Limerick City Gallery of Art, I assisted the EVA Administrator in the day to day planning for EVA, assisted the curator and artists, and worked with them in installing the exhibition at Limerick City Gallery of Art and then throughout the other city wide venues.  From 2000 to 2010 my involvement with EVA was as the technical manager for the section of the EVA exhibition that was being exhibited at the gallery.

Since the 80’s and 90’s, I’ve seen Irish artists grow and mature over the decades, artists like Ronnie Hughes, Susan MacWilliam, Janet Mullarney, Richard Gorman and many others. Sometimes, if a curator was selecting for the EVA exhibition they might ask you as someone familiar with the artists as people, well what are they like? Do you know their works? Do you like it? Your opinion may just have been a genuine raw response, but helped in some crucial decisions.

SD: Do you think this had an influence on your own practise as a student?

S’OR: I think there were a lot of personalities in art college. For me, it was quite patriarchal and lacked constructive criticism. Sticking to your guns wasn’t easy and I found I was always on the defence. Art college was hard like that, it’s always about the ‘why?’, which isn’t always the best method I think, because then it’s not about strong choices. But that’s the nature of art school, and you have to keep going.

Helping out in the Limerick City Gallery of Art – through EVA, and with artists and students – opened me up to a community of people to discuss art with – without getting too heavy into the ‘art-speak’. My confidence grew being able to assist artists and Paul  with the exhibitions. Half the time I was on the periphery, watching the curator or listening to exchange of information or bits of conversations, or an artist trying to explain their work informally. In contrast to my experience of college, they were always constructive exchanges. There was a rapport, and curators looked positively for solutions to installations and works.

SD: Do you think being around international influences in Limerick in this way changed the way you saw the city?

S’OR: Limerick was the big city to me, and an experience. Going to the art college and looking at art, be it in the gallery or elsewhere was interesting to me, but I was still always more interested in other people’s work.

A couple of times I also submitted work to EVA through the Open Call  myself, and it was nice to see my work amongst all the other works, hearing opinions on it. At least my work was being seen. My sister Susannah got selected twice. For Susannah it was a confident incentive to keep going at an early stage. It was the same with all artists that submitted and were selected for the final exhibition. Some of them were very young in the early years, with many of the art college tutors submitting works and getting involved.

From the early 1990’s onward the media and formats were changing for most artists submitting to EVA – photography and video works were coming into the foreground compared to before when the artworks were 2D or sculpture.

SD: Limerick has been the home of EVA for over 40 years – what effect do you think this has had and how have you seen artists relationship with Limerick change over the years?

S’OR: Before 1985 EVA was a major contemporary exhibition at Limerick City Gallery of Art that featured a lot of artworks by local Irish artists. As a student you were brought along by Paul, who was teaching at the time in Limerick School of Art and Design, to do complementary studies which included reviewing other artworks on exhibit. He’d take us to the gallery and we’d sit in the space, look at the old masters landscapes and the Limerick Arts Society exhibition, but EVA was the contemporary exhibition and featured some local artists, some of whom were tutors at Limerick School of Art and Design.

Back then, artists didn’t submit works through the Open Call in response to theme. It was more of a personal thing. Now everything seems more geared towards a theme or a specific idea, and maybe that feels like the artists aren’t always being as true to themselves. Some artists like it that way, but it’s not for everyone.

SD: EVA’s changed then from a local focus to a internationally influenced exhibition. What is your memory of this change and what was its effect at the time?

S’OR: The first exhibition with an international focus was in 1994, curated by Jan Hoet. The international aspect had a dual purpose; the idea was to bring international artists to Irish audiences in Limerick, and a build an awareness of the art scene in Ireland to international curators.

I remember that year that my sister Vanessa and I did the wall mural for the artist Jessica Diamond on the side of the old Dunnes Stores building on Sarsfields Street. It took us about a week. The two of us had a cherry picker, and Jan Hoet was walking around to check to see how it was going. As soon as we had it all prepped, Jessica came out on the final day to finish the text – one of many outdoor pieces that year.

Although I finished college in 1990, I still knew many of the tutors at Limerick School of Art and Design and many other college graduates; I’d ask them if they knew of anyone who would be interested in helping out with EVA – some students from the college would be sent out to us and we’d try to pair them with artists or work that they might be interested in.  It would often end up that they’d come back to work for EVA three or four consecutive times. The whole idea of working with other artists to pull an exhibition together was really well received and both the students and artists really enjoyed the collaboration.

SD: It seems that EVA and Limerick has had a personal effect on curators and artists who have visited which they have been able to take away with them.

S’OR: I think the personalities within the whole EVA teams over the years were the selling point, and the genuine commitment and interest by everyone to make it all work – it was an extended family of people and welcome visitors.

It’s changed now, social media has changed people’s personal links to each other. A lot of information exchanged about the exhibition at the beginning was through fax correspondence and phone calls. It was never about one plan, every work had to be developed in some way through the personalities of everyone involved. A lot of it had to do with goodwill on everyone’s part. It was a community of people working together to get it done. You could get a phone call that 10 people were needed for half an hour, or to pick something up last minute, a scramble to get those last minute things done.