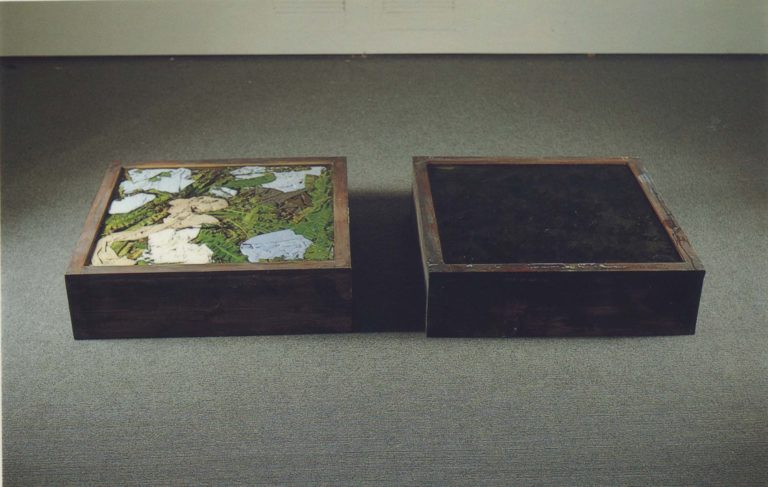 Rear View Mirror #1 is an interview between artist Michael Canning and Sara Dowling (EVA Curatorial Scholar 2017 – 2019).  The published interview is the first of the Rear View Mirror series, an ongoing research project that aims to explore and unpack EVA’s history since 1977.

Michael Canning is an artist and a Lecturer at the Department of Fine Art, at Limerick School of Art & Design, LIT, who participated in EVA throughout the 90s and early 2000s (1993, 1994, 1999, and 2001). In the first of the Rear View Mirror series of interviews, Michael speaks of his experiences with EVA and the broader art world of the 1990s with Sara Dowling (EVA Curatorial Scholar).

Sara Dowling: What were the opportunities for young artists like in Ireland after you graduated from Limerick School of Art and Design in 1992?

Michael Canning: When I finished in Sculpture I was offered two scholarships, one to study Theatre design in Latvia and one to study in the School of Fine Arts in Athens as part of a Greek Government Scholarship. I didn’t fancy a cold winter, so I went to Athens. […] It was real and raw, there were no airs and graces to it, very much ‘if you want to work – there’s the studio space of your dreams. Good light, white walls, cheap materials – get on with it.’ […] I had my first solo show there. The gallery space was beautiful and the show looked great, it gave me a good line for my CV […]. By the time I returned from Greece I had 35 mm slides, which I took to London and showed to gallerists.

SD: I suppose the access to galleries and resources online like we have now just wasn’t an option. How did you go about networking your practice at that time?

MC: There was no online – there was no Internet. You could literally find peoples phone numbers in things like the Artists Newsletter. As with anything in life, if you approach people in a reasonable way and you ask them if they wouldn’t mind helping you out, people can be great.

SD: It’s often been said that there was easier access for young Irish artists to exhibit in EVA in the early days. You regularly participated in EVA throughout the 90s, what was your experience of EVA back then?

MC: The first time I participated in EVA I was actually living in Athens. As far as I was concerned it was a big deal. EVA was then, and I think still is, an important thing for contemporary art in Ireland. The fact that it took place in my hometown of Limerick was a really big thing for me. It’s what inevitably you measure yourself against. As a teacher I’m always asking myself – am I equipping people to go out into the world and be able to play at that level?

SD: Limerick is still affected by the recession of the early 2000s and is looking to culture as a tool for recovery. How was EVA received in the city in the 90s?

MC: Back then Limerick still had this dark, gloomy reputation. There was something bleak about Limerick, and EVA felt like it emerged out of that bleakness. You could feel like you were a part of something that was European minded; there was a buzz when international artists came to town. My hero was Felix Gonzalez Torres, and his participation in EVA in 1996 was a big thing for me. To hear that he died just a few days before he was due to arrive here was heartbreaking. There was also a lot of goodwill around Limerick. I remember we went to an electrical shop on Roches Street which is still there today. We went in, the sales lad asked ‘what are you using these for?’ We told him it was for an installation as part of EVA, and he said something that has stayed in my head: ‘we help the artists whenever we can, if it wasn’t for the artists we’d still be living in caves.’ I wondered was he taking the piss out of me, but he wasn’t!

SD: Having had access to the archive, it does seem that there are a wide range of different curatorial connections with Limerick over the years, but a good sense that the curators themselves have been impacted by Limerick and its people.

MC: Everybody’s different, but I like it best when EVA has personality that is driven by artists rather than by a curatorial thesis. Some shows felt like ‘Let’s put great artworks together in the one city that will be challenging for the artist and the wider audience – let’s wind it up and see what the hell happens.’ I think the best curatorial activity puts outstanding work in place and leaves it the hell alone. I’m not afraid to say, and I’ve said this before – that in my life there was before EVA and after EVA. EVA helped me form in to the artist that I am, and then into a teacher. It’s all based on what EVA was when I was most invested in it. I don’t feel as connected now as I did then, but I do associate it with so many positive experiences, and fantastic people who helped me when they didn’t need to.

Michael Canning studied Sculpture at Limerick School of Art & Design, and at The School of Fine Arts, Athens, Greece, after being awarded the Greek Government Scholarship. He completed an MA in Painting at the National College of Art and Design, Dublin, in 1999. Michael is a Lecturer at the Department of Fine Art, at Limerick School of Art & Design, LIT, and has taught on the Sculpture & Combined Media and Painting courses. He was awarded the Hennessy Craig Prize by the Royal Hibernian Academy in 2005, and awarded a Fellowship by the Ballinglen Arts Foundation in 2007, and was artist in Residence at the RHA, Dublin, in 2008. He has worked on several printmaking projects since 2010 with Stoney Road Press, Graphic Studio, Dublin, Parallel Editions, Limerick, and in 2017 was an Artist in Residence at CHAO Printmaking Studio, Chao Art Centre, Beijing. Selected recent solo exhibitions and projects include Your Cyclical Natures, Oliver Sears Gallery, Dublin, Matter Motion Minutes, Waterhouse & Dodd, London, The Respectful Distance, Oliver Sears Gallery, 16, Stoney Road Press, Dublin, and Artists’ Rooms, Limerick City Gallery of Art. His work is in private and public collections internationally, including Allied Irish Banks, Bank of Ireland, University of London, The National Self Portrait Collection at University of Limerick, Butler Gallery, Kilkenny, and Limerick City Gallery of Art. He lives and works in County Limerick.