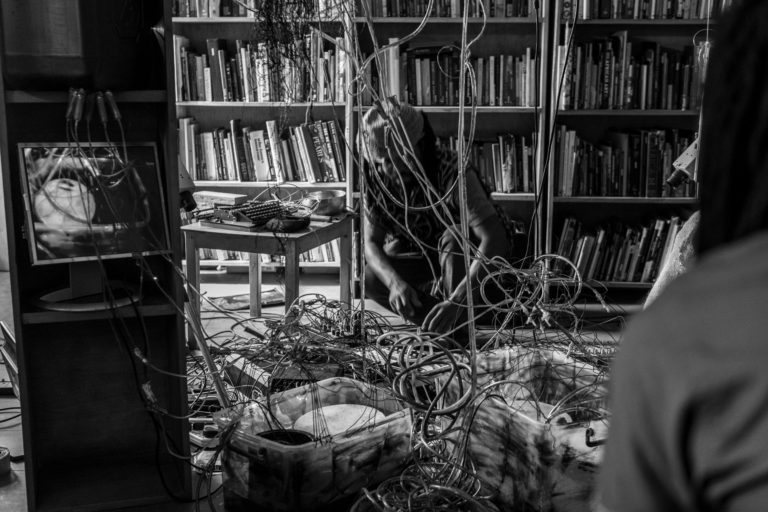 EVA International and IMMA are delighted to announce a new commissioning partnership with artist Em’kal Eyongakpa. The commission will see two of Ireland’s most significant contemporary arts organisations work together with Em’kal Eyongakpa on a major artistic production between the sites of Limerick and Dublin. The commission will be developed and presented collaboratively, coinciding with the 39th EVA International taking place in 2020 – 2021.

Em’kal Eyongakpa (b. 1981, Mamfe, Cameroons) is an artist whose work draws from a range of sources including indigenous knowledge systems, ethnobotany, applied mycology and technology. He is also known for his involvement in self-organised community research spaces, such as KHaL!SHRINE in Yaounde (2007-2012) and the research platform/ Boh- Bɛtok/ ɛfukuyu. Eyongakpa holds degrees in Plant biology and Ecology from the University of Yaounde 1 and was a resident at the Rijksakademie in Amsterdam. The artist’s work has recently been exhibited at the Jakarta Biennale (2017), the 13th Sharjah Biennial (2017), La Biennale de Montreal (2016), the 32nd Bienal de São Paulo (2016), Bamako Encounters (2011 and 2015) and the 10th Dak’Art biennial (2012).

As organisations with international reach and distinct profile within a national context, the partnership between IMMA and EVA seeks to raise the horizon of opportunity for the commission and production of ambitious large-scale artworks in Ireland, with a focus on thinking beyond the ‘exhibitionary’ encounter of contemporary art.