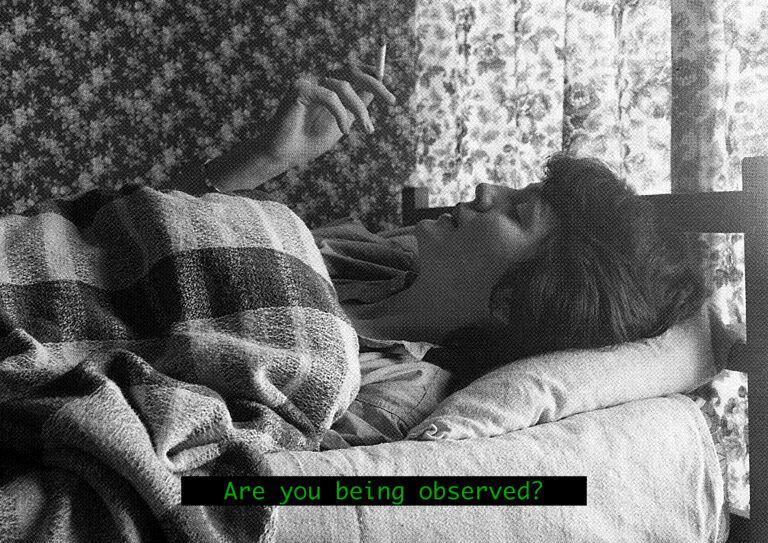 Poster 3, Are you being observed? Image description: Black and white photograph of a woman with a hairstyle reminiscent of the 1980s, lying in a single bed and smoking. She lies flat and her gaze is on the cigarette in her hand. The sheets are textured flannelette and the bedspread, wallpaper and curtains have clashing checked and floral patterns. A black text box near the bottom of the photo has the words “Are you being observed?” printed in green. Photographic image, Creative Commons BY-NC-SA, Camerawork Derry.

It’s not for you we did it

A print folio of 5 posters designed by Ciara Phillips. The edition follows the online project, It’s not for you we did it, developed by Sara Greavu and Ciara Phillips for Phase 1 of the 39th EVA International.

It’s not for you we did it began through an interest in the work of Derry Film and Video Workshop. Established in Derry in 1983 and operating until 1989, this feminist, anti-imperialist film collective produced a number of films including Stop Strip Searching, Planning, Mother Ireland and Hush-a-Bye Baby as well as enacting various forms of community cultural education. It’s not for you we did it took the form of dossiers of interviews/texts, images and posters produced and assembled by curator Sara Greavu and artist Ciara Phillips. It was presented on EVA International’s Little did they know online platform. These dossiers document the process of researching Derry Film and Video Workshop with former members of the collective and the broader community, mapping the complex web of relationships and conditions that fostered its formation. The five posters in this collection, designed by Ciara Phillips using photographs from the community photography project, Camerawork Derry which was active around the same time as Derry Film and Video Workshop.

Dimensions / Format
5, A3 risograph prints. Available exclusively via EVA International in a limited edition of 100 copies, presented in a folio with a certificate including additional information about the project.. Produced by the Derry Print Workshop, a community print-shop in Derry City.

Please email (info@eva.ie) for purchase enquiries. All proceeds of sale will support the work of Derry Print Workshop.