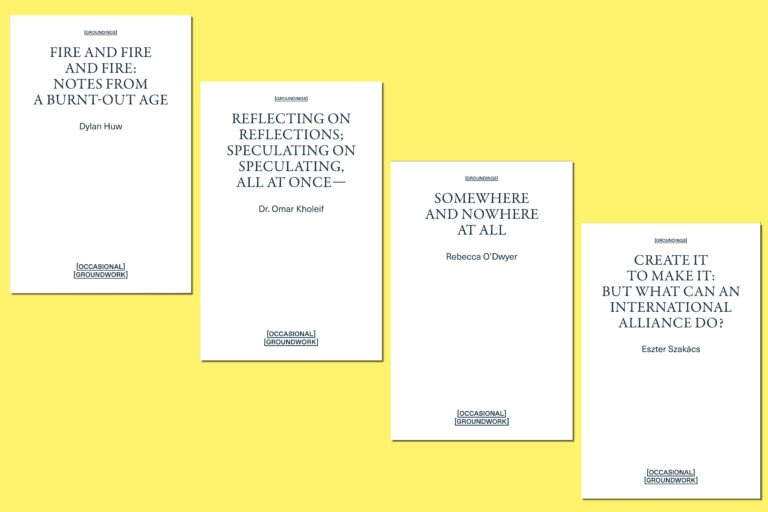 REFLECTING ON REFLECTIONS; SPECULATING ON SPECULATING, ALL AT ONCE—
Dr Omar Kholeif

SOMEWHERE AND NOWHERE AT ALL
Rebecca O’Dwyer

CREATE IT TO MAKE IT: BUT WHAT CAN AN INTERNATIONAL ALLIANCE DO?
Eszter Szakács

The texts form part of the Groundings series of texts by writers, artists, curators, and academics, exploring themes of internationalism, sustainability, audience, and infrastructure within the context of the contemporary art biennial and the shift in conditions imposed by the ongoing pandemic. Further texts in the Groundings series, by Olivia Berkowicz & Amanda Ferrada, Ben Eastham, and Valeria Graziano, Marcell Mars & Nick Thurston, will follow in Spring 2022.

Biographies
Dylan Huw is a writer living in Cardiff, Wales, where he works collaboratively across artistic disciplines and languages. He co-runs mwnwgl, a curatorial platform for art/writing in and around Welsh languages, and is a Creative Associate with the rural contemporary art organisation Peak Cymru. He recently guest-edited an issue of Cynfas, the National Museum of Wales’ digital magazine, on the theme of queer looking, and was awarded the 2021 Geraint George Scholarship for a text reflecting on time spent on an artists residency on climate change in Snowdonia.

Dr. Omar Kholeif is an author and artist; curator and historian whose work considers the impact of culture at the nexus of emerging technology and social justice. Kholeif is considered one of the leading authorities on art and digital culture—as an author; educator and exhibition maker. Their more than two-dozen books include, Goodbye, World! Looking at Art in the Digital Age (Sternberg Press 2018) and Art in the Age of Anxiety (SAF/Mörel/MIT 2021). They currently serve as Director of Collections and Senior Curator at Sharjah Art Foundation, UAE. They are a co-founder of the ethical design collaborative the Center of Cultural Confusion and the agency www.artpost21.com.

Rebecca O’ Dwyer is an art critic and writer based in Ireland and Berlin. She holds a PhD from the department of Visual Culture at the National College of Art & Design, where she wrote about art criticism and capitalist realism. Rebecca’s writing has appeared in publications such as Paper Visual Art Journal, Source Photographic Review, Art Review, frieze and elsewhere; she is working on a book length collection of essays exploring ideas of bad faith, slowness and public space.

Eszter Szakács is a researcher, curator and Ph.D. candidate at the University of Amsterdam, where she’s taking part in a project titled IMAGINART—Imagining Institutions Otherwise: Art, Politics, and State Transformation. Eszter is on the curatorial team of a grassroots civil initiative OFF-Biennale Budapest, and was part of the East Europe Biennial Alliance team that collectively curated the Kyiv Biennial, 2021. She is co-editor of the forthcoming anthology with Naeem Mohaiemen, Solidarity Must Be Defended (tranzit.hu), Van Abbemuseum, SALT, Tricontinental, and Asia Culture Center).