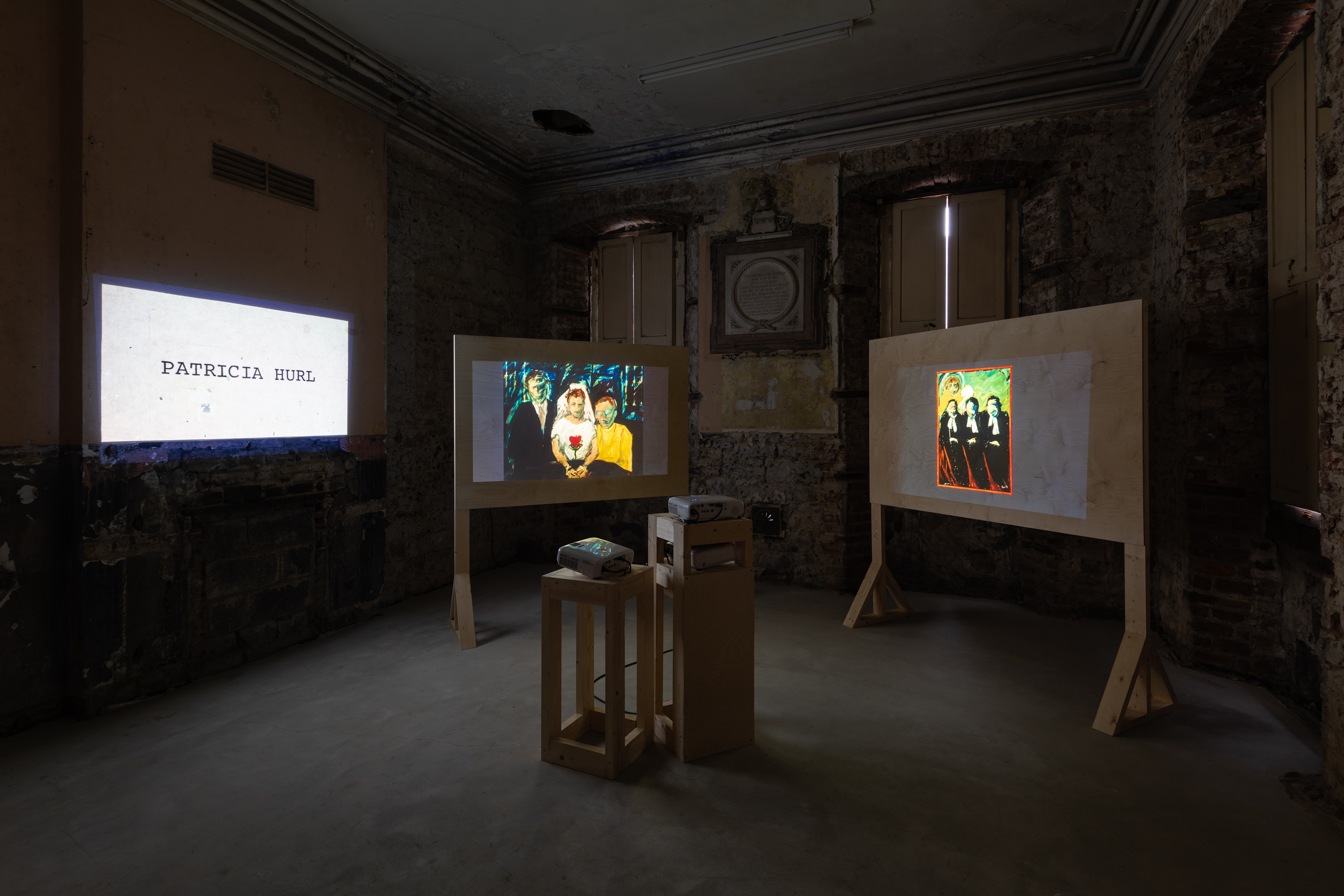 Merve Elveren: Pauline, let’s start with the Women Artists Action Group (WAAG) foundation, back in April of 1987 in Dublin. How did the network get together, and what was the shared impulse between the founding members?

Pauline Cummins: I proposed that we start an organisation called WAAG at a meeting of women artists in Clonmel. It was agreed. In 1987 Breeda Mooney and I went to Amsterdam to join the International Association of Women in the Arts (IAWA). It was a great conference, very inspiring. We met women artists from organizations in Austria, Holland, England, East and West Germany, and Switzerland.

ME: So, before you visited IAWA in 1987, you, and your colleagues, already had the idea of starting a women artists’ network. What was your motivation? In one of our earlier conversations, you mentioned an Irish women artist exhibition in the United States, which created frustration among your friends. Did the show generate pressure for a structural organisation, or you already had other concerns about the women artist’s lack of presence in the Irish art scene?

PC: The motivating and unifying events for us were a series of men only exhibitions in the 80s that got a lot of publicity and a large Irish Art exhibition that travelled internationally that had only one Irish woman artist included. These exhibitions were government and arts Council supported. This was happening at a time that the students in our art colleges were 60% female. Louise Walsh reminds me that there was also an exhibition curated by Brian McAvera, about’ The Troubles’, in Northern Ireland, and there were no female artists selected for that either. Even though there were many women, including myself, making powerful work about the war in Northern Ireland.

ME: In the first group meeting held on April 4, 1987, Jenny Houghton, Marja Van Kampel, Una Walker, Peggy Sharkey, Beth Ridgell, Catherine Kollefrath Oleanachain, Bleun Volker, Liz Collinaine, Louise Walsh, Fionna Barber, Delise Osborne and you gave introductory speeches about your practices and shared your concerns on the scene. The list is notable because there were artists, students, professors, photojournalists, art historians from Ireland, and North and other countries such as Italy, Netherlands, and France. WAAG’s emphasis on ‘artist living in Ireland’ and that the network was open to everyone was there from the beginning. Can you talk about the structure of WAAG?

PC: I don’t remember everyone who was there at that meeting in Clonmel. I know that my friend Rochelle Rubinstein was not there. I spoke to her yesterday in Toronto, and she wasn’t at that meeting. I remember Jenny Houghton, of course, and Delise Osborne. I thought Alice Maher was there as I remember her talking about the MA course she and Louise Walsh were on in Belfast. Was Fionna there? Yes, we always thought that it was important to have art historians involved and the historian Joan Fowler was very helpful as was Jenny Haughton. They advised me to set WAAG up with a constitution and regular minuted meetings, which I am very glad we did. 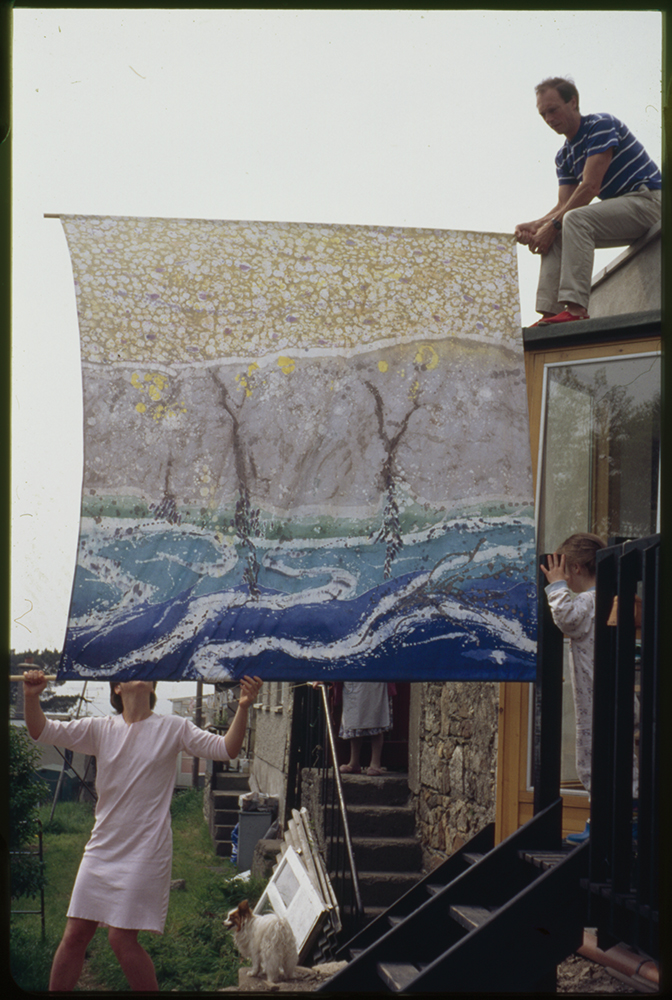 ME: Also, in the very first meeting, WAAG was envisioned as a network that organizes exhibitions, conferences and that also houses an archive for Women artists. Soon after the founding, in July 1987, during the Third International Interdisciplinary Congress on Women in Dublin, WAAG organized the Slide Exhibition. How did this exhibition come into place?

PC: The slide show was in response to the 3rd Interdisciplinary Congress. Medb Ruane, Arts Council of Ireland, organised a meeting, and that is when I met Breeda Mooney. Medb helped us organise the event. I found documents about it recently—as well as the slide show—which ran every day all day for a week; we had a series of lectures and discussions and talks by the German artist Marianne Vex, Mary Duffy and myself. This slideshow then became the first of our exhibitions in September 1987 in the Guinness Hop Store in Dublin. I have given all the papers to NIVAL about the constitution and the aims of WAAG. It was to promote the work of women artists working in Ireland at home and abroad. The first WAAG publication was made by me in response to our invitation from artist May Stevens to Alanna O’Kelly, Mary Duffy, and myself to speak at the Women’s Caucus for the Arts in Boston in 1987.

ME: As you mentioned, in September 1987, WAAG opened its first inaugural exhibition at Guinness Hop Store and continued the 2nd exhibition in 1988 at Royal Hospital Kilmainham. The same year you organized a symposium in Derry on the practice of artist May Stevens, which took place in Derry at Foyle Arts Centre. Art historian and curator Fionna Barber, art historian and critic Moira Roth, filmmaker, and Derry Film and Video Collective member Anne Crilly, and artists Pauline Cummins, Helen Chadwick, Aileen McKeogh, and May Stevens were among the speakers of the symposium, addressing the exclusion of women’s works from exhibitions, and, by extension, the canon of art history. How did this symposium realize? Was it something WAAG initiated, or was there an invite?

PC: WAAG initiated the seminar. Breeda Mooney and I had a conference call with Declan McGonagle, who was running the Orchard Gallery in Derry. We were looking for a venue and financial support. It made sense for him to provide an interested audience for May Stevens’s work, and it made sense for us to consolidate our connections with artists and historians from N-Ireland. Moira Roth, an amazing American historian, and activist was going to be in Derry to support May, and Declan was able to invite Helen Chadwick. So we were able to include both Moira, May, and Helen onto our panel of speakers. Alongside myself as chair of WAAG and Fionna Barber from NIWAG. We also invited Aileen McKeogh, an Irish artist, who recently returned from the USA and a teacher in NCAD at that time. It was a very powerful conference. The links we made there with May Stevens and Moira Roth continued for years afterward. Later, May Stevens invited Mary Duffy, me, and Alanna O’Kelly to speak in Boston; and Moira Roth wrote an important essay for Sounding the Depths, my collaborative exhibition with Louise Walsh. 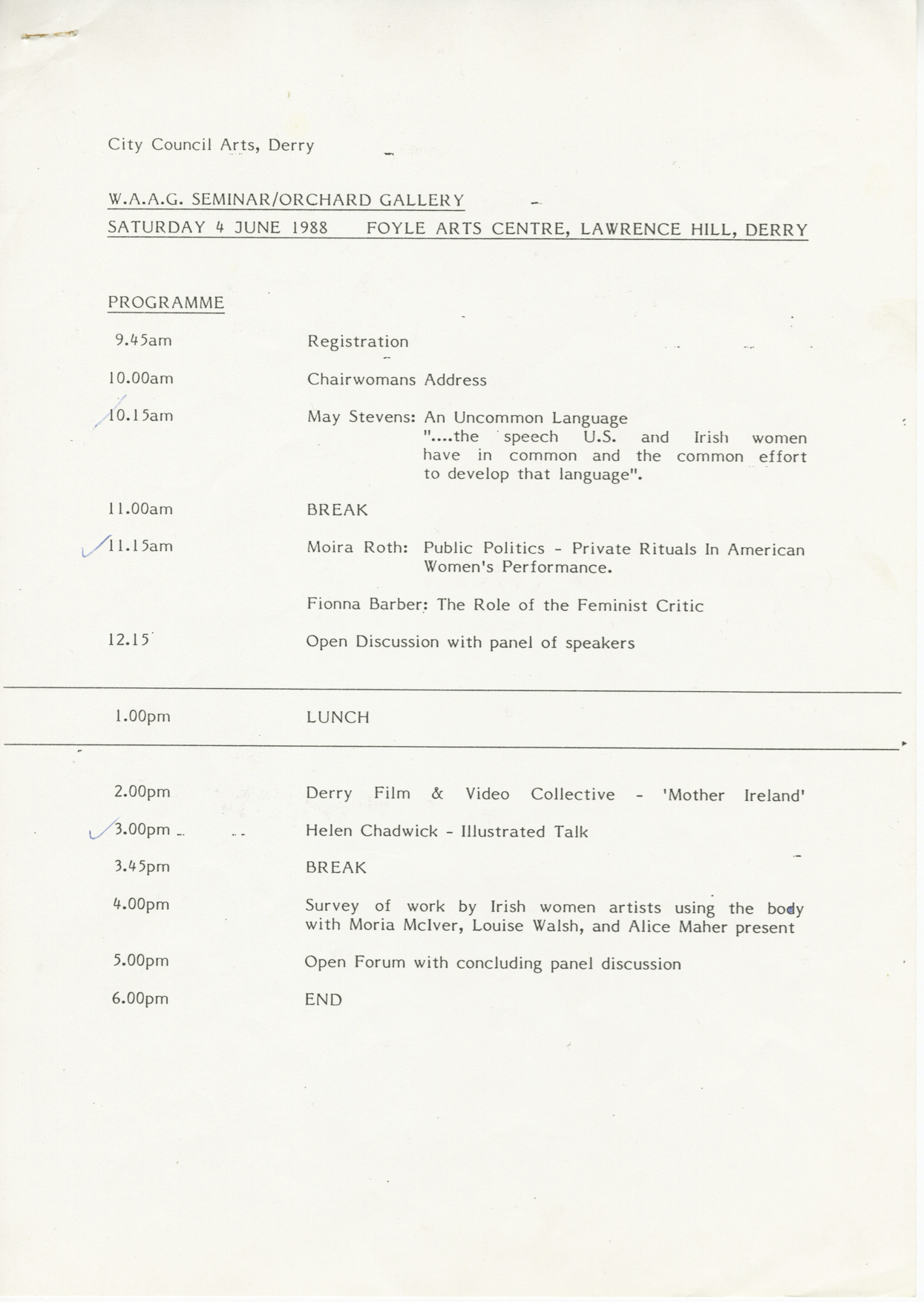 ME: Why and how did you decide to organize the seminar in Derry? Previous to this event, did you or WAAG have any connections with the Northern Ireland art scene?

PC: WAAG had been visiting cities in Ireland like Cork and Galway. So we wanted to meet artists in the North to encourage membership and solidarity. I had met Declan before and I knew some artists in NI already. Una Walker, who was in WAAG, lived in Belfast and I had shown a slide piece in Belfast (Entitled); Anne Kelly is a midwife, as part of a neighbourhood outreach programme in 1984. I met John Kindness and Willie Doherty, also from NI, who were friends. It was shocking to see armed army patrols in Derry and armored cars. I was also part of an exhibition, Available Resources, in 1991. This was an international exhibition of performances and installations that took place in Derry/Londonderry.

ME: In 1988, WAAG continued with the 2nd inaugural exhibition at the Royal Hospital Kilmainham, and throughout the year, members attended international exhibitions with the International Association of Women in the Arts (IAWA). Did these interactions pave the way for other programs in Ireland, I was mostly thinking about the 1991 Women Artists and the Environment conference and on-air exhibition.

PC: Our involvement with IAWA encouraged us to apply for European funding when Dublin became the European Cultural Capital in 1991. We invited each group in IAWA to select an artist to represent their country. These were the artists who created works all along the River Liffey from City Arts Centre to IMMA. We still had to raise funds, and we had the Small Works (1989) exhibition with work donated by many artists. We could only cover some of the artists’ expenses, but they came and made great work. EVA&CO produced a book about the event, which was so important as a record. We managed to get President Mary Robinson to open the seminar in the beautiful chapel in the Royal Hospital, IMMA. IMMA also gave us space for two of the artists to perform in the large banquet hall and the grounds of the museum. We got a lot of help from the Parks Department and the port authority.

ME: From the archive of WAAG we see that an on-air exhibition took place around Moss Street, Upper Exchange Street, Heuston Station, George’s Quay, and the Customs House Quay. Some are public spaces, but you also used factories, art centres. How did you find these venues? And why did you decide to focus on issues of the environment? Was it a highly discussed topic of the period?

PC: We invited each organisation in IAWA to select an artist to represent them in Dublin in 1991. WAAG invited them to make a site-specific work choosing their own site along the River Liffey. In February of that year, the 10 selected artists came to Dublin, and Breeda Mooney and I took them by boat along the Liffey from The City Arts Centre where our temporary office was located to Hueston Railway station. The artists’ choice of subject matter led us to name the event Women Artists and the Environment. Most of the work was outdoor sculptural work, and many referenced the effects of pollution and the necessity of alternative ways to access energy. But it was also about creating artworks and setting them in the open environment. Once the artists had selected their sites, and that took a while, we set about getting permissions. It would never happen now in Dublin, but we got permission from the Port authority for Nora Bachel’s wonderful wave and solar-powered light installation on the river and the station master in Hueston station after many phone calls and meetings gave permission for Roxane Permar’s large installation. The parks department helped supply grass for Frederike Bachmann’s sculpture on O’Connell bridge and provided generators for the slide projectors for Roswitha Baumeister projected images onto Trend Fashions factory exterior. 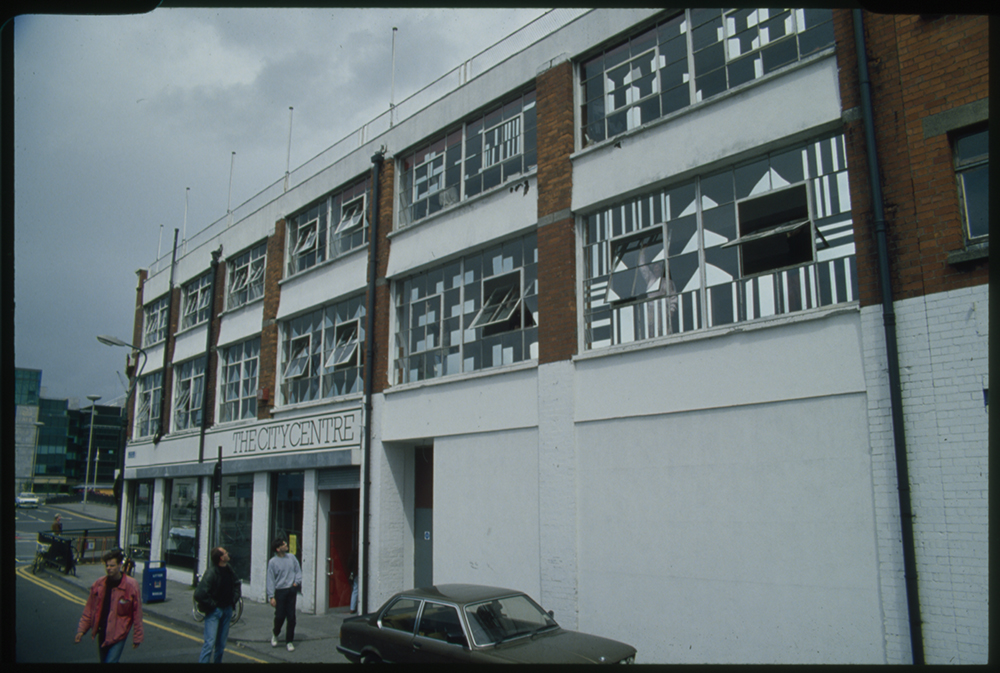 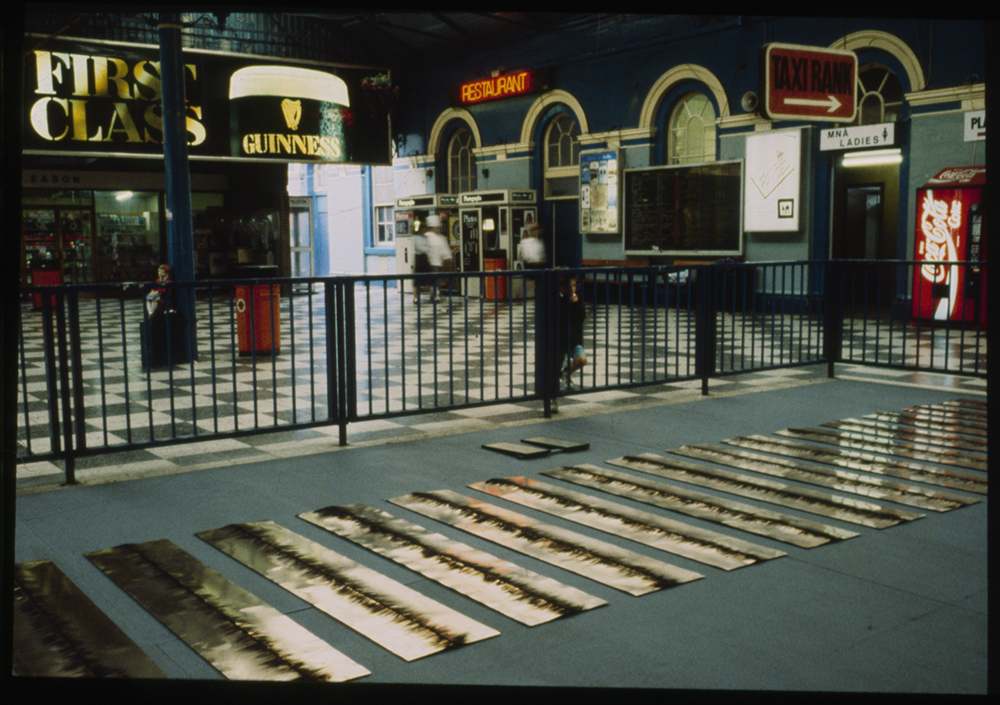 ME: After this extensive project, WAAG started dissolving. Co

PC: ​W​AAG was wound up after our big conference in 1991. Breeda and I wanted to resign and had hoped that some of the other committee members might become chair and treasurer. We had a lot of work to do after Women Artists and the Environment, and the Guerilla Girls fees had been high and we had no real income to cover our office expenses. My sister had died that year and I needed to focus on my own work and my family. I always wondered why Patricia Hurl or Patricia McKenna didn’t want to continue WAAG, we had so many good contacts at that stage, and we had made a name for ourselves through our hard work and actions.

ME: As the last question, I would like to ask about revisiting 1987 the Slide Exhibition for 39th EVA International’s phase 1. For more than thirty years, you preserved the archive of WAAG, and the National Irish Visual Arts Library (NIVAL, Dublin) digitised it this year. What does it mean for you to come across WAAG’s programs and start discussing it after many years?

PC: Firstly I want to thank you, Merve, and EVA International for highlighting the WAAG archive and the WAAG Slide exhibition 1987. It allowed me to reflect on what we had achieved as a group during that difficult time for women artists. It also allowed me to see the real value of the archive and the important role that NIVAL is playing in preserving the history of Irish art and art organisations. 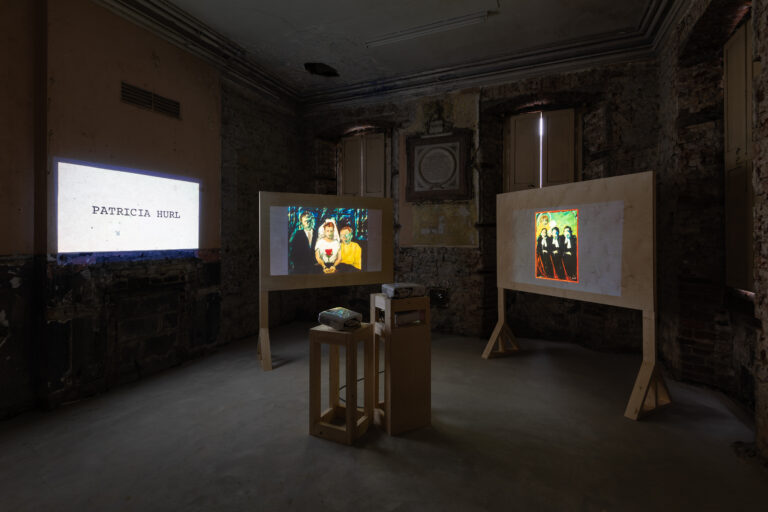