The way we work 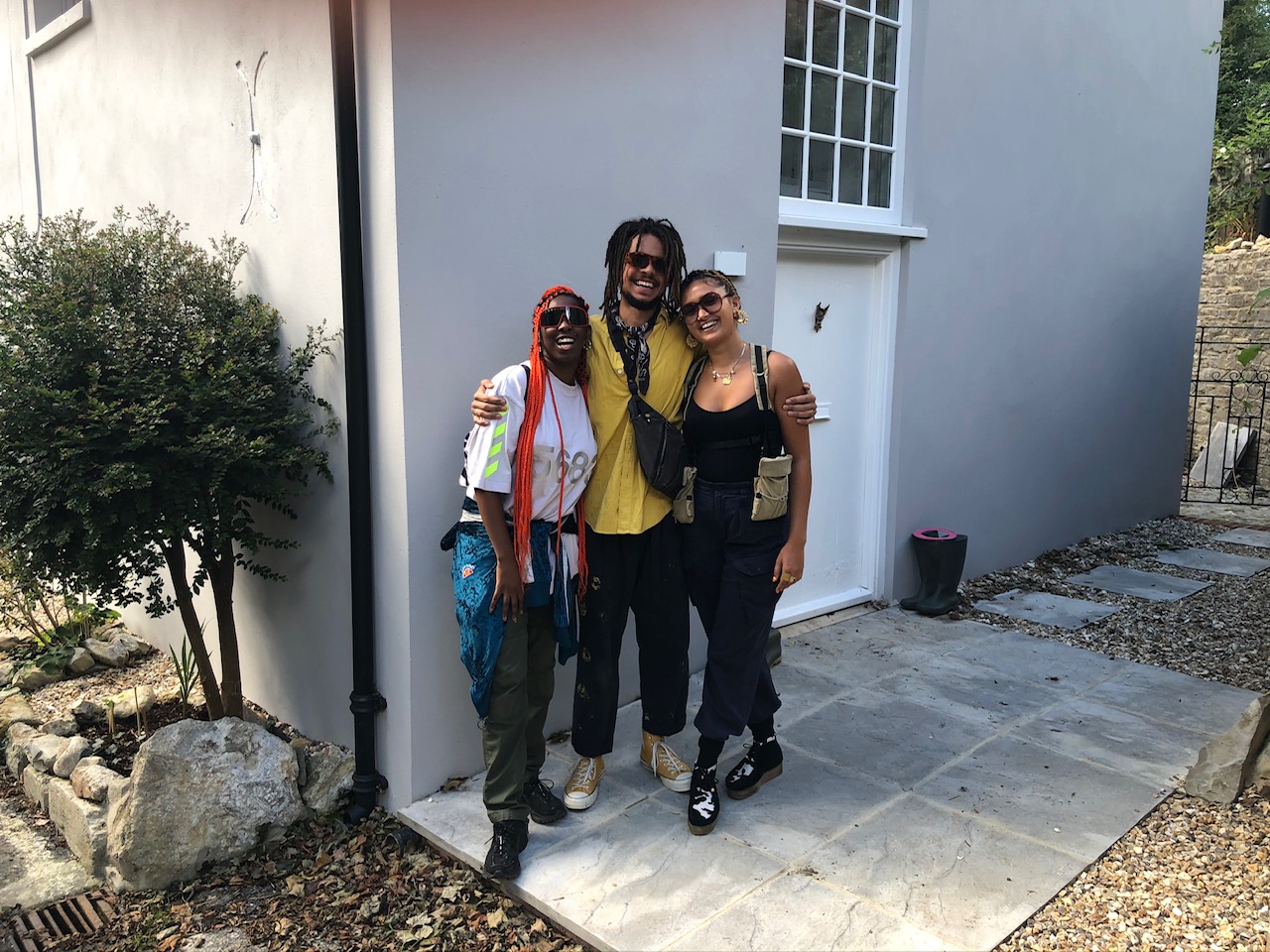 A conversation between Melanie Jackson and Merve Elveren conducted between November 10, 2020 – January 28, 2021

Merve Elveren: Melanie, thank you very much for accepting this short conversation request. I would like to start with the same question I did with the other EVA Phase 1 participants.

I feel that it is important to document and reflect on the current circumstances, specifically our shared experience at EVA International’s 1st phase. As you know, the exhibition venues closed down due to the Level 5 COVID restrictions in Ireland. The situation is pretty much similar everywhere in the world. The growing numbers in cases bring more uncertainties. I’m curious to hear what you feel about ‘today,’ what is changing, or has changed, around you?

Melanie Jackson: The idea of certainty itself has changed, hasn’t it? Nothing is as it was in quite the same way. So many seismic moves in the external world to take on board whilst simultaneously thrown into deep introspection in huge swathes of time spent alone. The way historical forces cut and drag through lives is palpable in a whole new, raw, tragic way. I’m aching for us to be relaxed and unselfconscious about breathing and sitting close.

ME: While waiting for a ‘closeness’ and ‘taking deep breaths’ without any limitations, how do you spend your days? I know you are busy with online teaching, and it takes a lot of your time, but I wonder, have there been changes in your practice? Maybe slowing down or just taking a break; or going back to the projects you have been thinking about working on for a long time.

MJ: sat indoors so much I’ve been taking great delight in absurd humour and what I can do with pigment and paint. I definitely wanted to create another reality where I could make beings wander freely. It’s not only the loss of freedom of movement I’m feeling during covid and lockdown, but the hateful immigration bill just passed in the UK at the moment and the loss of unrestricted movement UK citizens will have in Europe from January. I haven’t made a utopian alternative—but space suffused movement, with colour and sexual ambiguity—absurd representations made in the medieval plague era reimagined for the contemporary eye. It’s been a satisfying place to be.

ME: I think we are all, one way or the other, trying to build a safe, and at the same time, a satisfying space for ourselves, where we can continue living and keeping sane. As you mentioned, not only Covid and the long-term social and economic effects of it, but also the despair unfolding by the political atmosphere are pushing us to build these spaces. And unfortunately, this has been going on for a while now. The work you are talking about is Spekyng Rybawdy. I’ll come to your collaborative work with Esther Leslie as part of EVA International’s Guest Programme, but before we do that, can you talk about Spekyng Rybawdy? As far as I know from our previous conversations, you have been archiving for this work.

MJ: It’s always been important to me that I’m drawing on and contributing back to collective knowledge, vernacular, fantasy, action; that my work isn’t thrown back just onto my personality or my individual position. I’m always excited about recasting a glance at documents and archives as a repository of collective behaviours and representations (as well as what is censored, missing, held back, of course). That’s something cutting through a lot of the work you have curated for EVA, and it’s been exciting to work with you.

In Spekyng Rybawdy, the images I have re-imagined or redrawn from my collection of images of a particular set of ‘medieval obscenities’ known as the ‘bawdy badges.’ Forgive me for quoting myself from sections of the introduction, but I can’t say it better:

Pilgrim badges are small cast tin or lead alloy brooches. Thousands have survived from the high and late middle ages. They were mass-produced and easily affordable, part of a vast and profitable pan European trade. They are often discovered in the banks and the beds of its rivers. They are exquisite, rough-hewn, and lively sculpted reliefs. A group of these—of which little was written or acknowledged but many made and found—are known as the bawdy badges, or the secular badges, sexual badges, or the erotic pins. They often depict penis and vulva as independent beings, often motile; being held up on horseback, stilts, wings, each other.

I share a line from Judith Butler about how “being reduced to one’s organs can be the site of injury, but that name-calling may be the initiating moment of a counter-mobilization,” which seems as important as ever 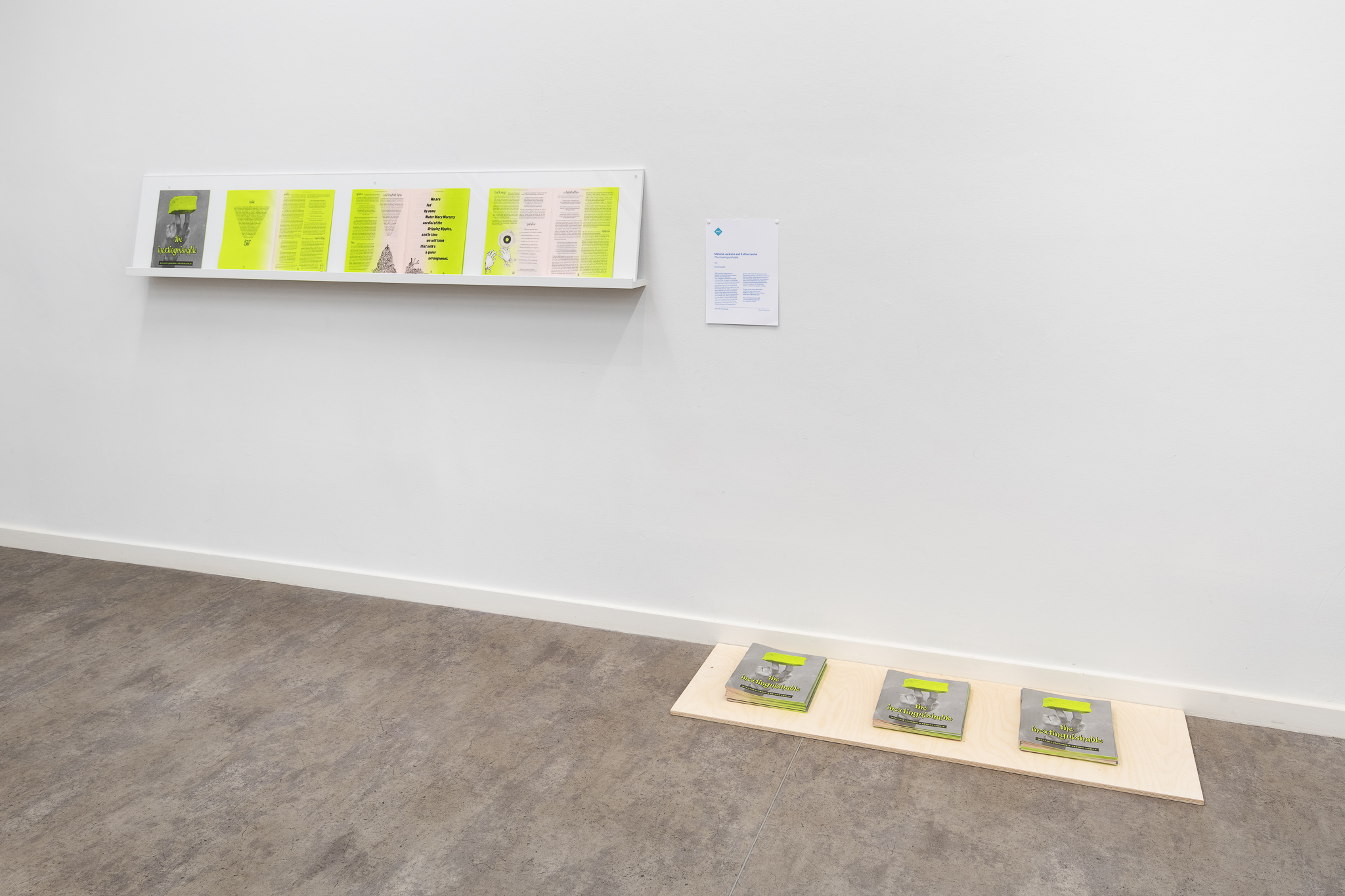 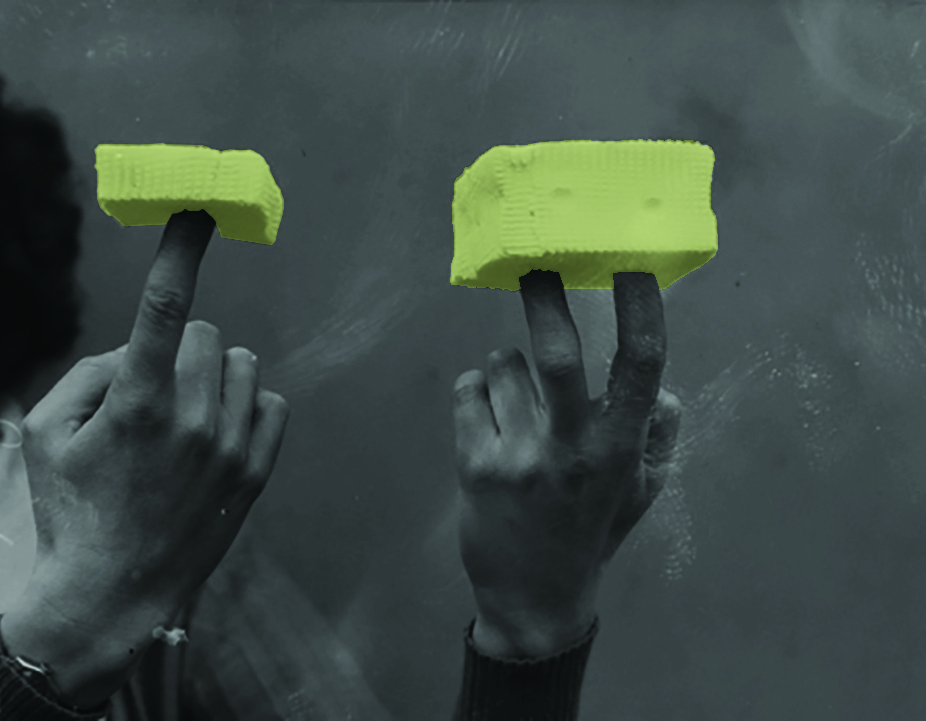 ME: From the mass availability of the bawdy badges to their new life in Spekyng Rybawdy, in a time where anything getting in contact with our bodies, both physical and social is considered toxic—or suspicious—, I feel it is important to talk about this change—even in some cases play—in perception.

It also underlines your focus on collective behaviours; your recent work on bawdy badges, and your latest collaborative work with Esther Leslie in 39th EVA International, The Inextinguishable. Can you talk about The Inextinguishable? I know you and Esther started working on this before the pandemic, but it is a responsive work for this new reality as well.

MJ: The work for The Inextinguishable grew from an ongoing set of interests, so it keeps refreshing and accruing and feels very live. It takes a very long view looking back and forwards, using milk as what we’ve described as a ‘white line’ through history. It is a fluid that is critical for human survival, at least in the early stages, yet a substance that is often ignored. The paradox extends in every direction—a body fluid and also a substance of great technological intervention—rich with metaphor, of care, love, dreams, hope as well as the rinsed out, exploited, and spent. It has a particular resonance in Limerick and Ireland—and the region is known internationally through dairy exports (particularly to markets in the UK, China, US, Germany, and increasingly to African countries). The ‘white line’ acknowledges the politics of race, as well as what it can reveal about gender, love, fantasy, addiction, technological interventions to the body, economics, derivatives, etc. The polymorphic nature of milk, e.g., its dynamic adaptive nature, chemical complexity, and its ability to assume powdered, liquid, and solid forms, are echoed in the ways we structure and play with the language and visual forms of the pamphlet. As a symbol of hope and of annihilation, it seems particularly resonant at the moment. Vaccines were first discovered through experiments in the dairy.

ME: In one of our last online conversations, you mentioned the ‘residency’ project that you were initiating; small in structure, with no funding or resources, and mainly based on personal conversations. What do you have in mind? And what is the urge to start this project? 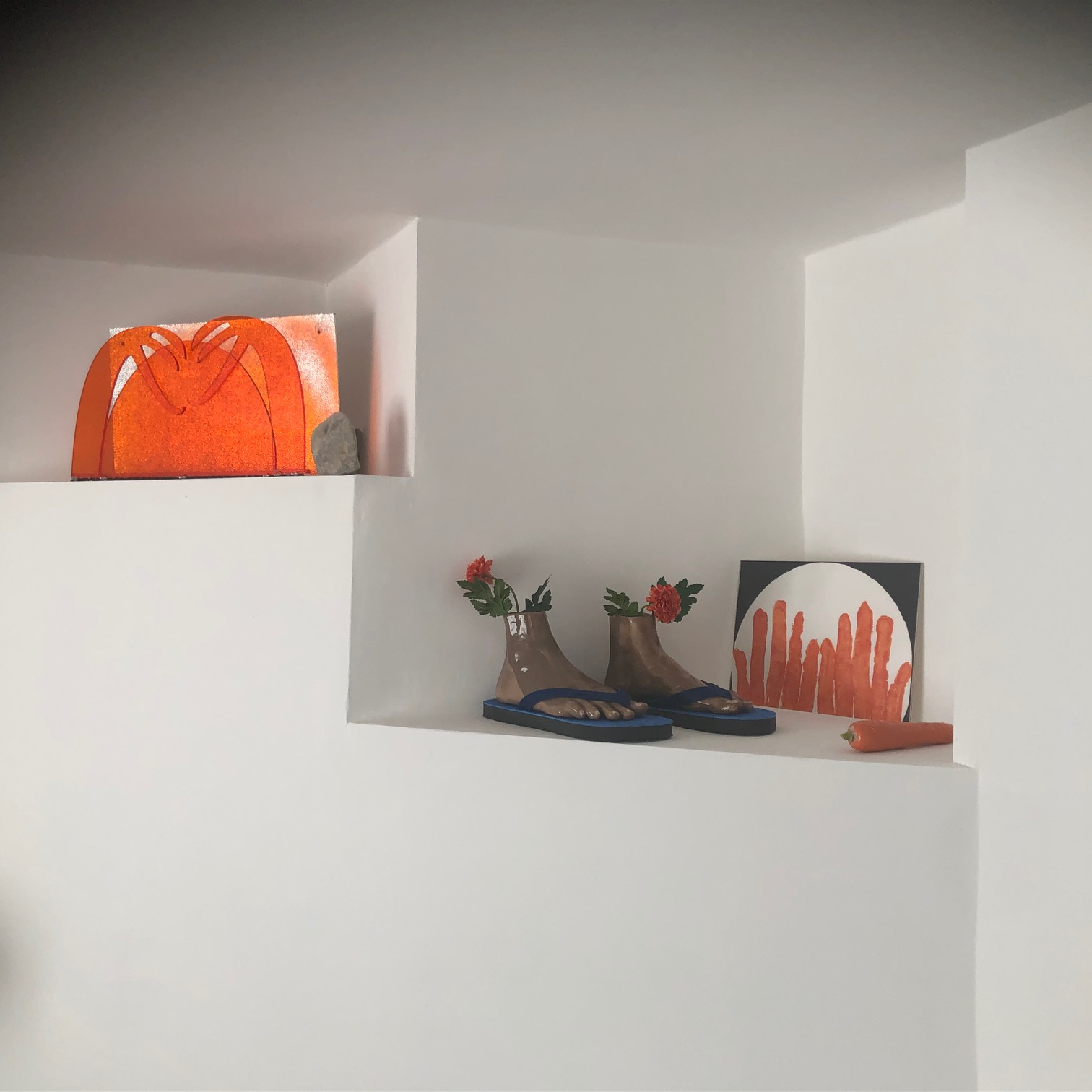 MJ: I saw a house on an auction site a few years ago. It was very cheap as it was in a state of semi-dereliction. It was in a very small village near the Dorset coast, which I love because of its geology. It’s the only county here without a city, so much of it is rural. The village church is remarkable because Saint Candida, patron saint of healing, is entombed there. Hers were the only remains of a saint not be exhumed from a church in the reformation. I’m not religious, but it is resonant.

The church was part of the pan European pilgrim trail, and that has long interested me. The church was selling the house, which had been built as a poor house in the 18th century. It was built to offer alms and respite for the poor of the county. I found a family of Jacksons in the 1700s church records who had been granted stays there in difficult times. It had been neglected and poorly built in the first place and was an act of love by my father and his wife to save it.

My Dad, who lives nearby and worked in construction all his life, has spent the last two years building there and repairing it every day. I work in London and could only help in summers and holidays, so it is as much their project as mine. I need respite from cities and love to walk and read without intrusion and time pressure, and this seems a perfect place to invite others to have that experience.

It’s prohibitively expensive to find rural spaces to take a pause for respite, and I want to extend its legacy. I have long collected artists’ books and ephemera, affordable editions. It is in no way representative or comprehensive—or an archive—but a kernel of ideas to invite others to share or to join for temporary loans or to produce new works. There will be open access rooms simply to read or come for respite, plan, rest, and contribute. I want to make it a place of secular sanctuary, on a pilgrim trail of another kind.

Obviously, the pandemic and the withdrawal from Europe have changed the timing of when I can make things happen and the freedom of movement, but it will be resolutely international.

It’s still in the planning stages, but something I am very excited about and have invited some publishers and curators, and artists to come and stay to sound it out as soon as lockdown is over to help me build it as an idea. It’s a small and quiet project, but what I feel able to do and offer at this time. 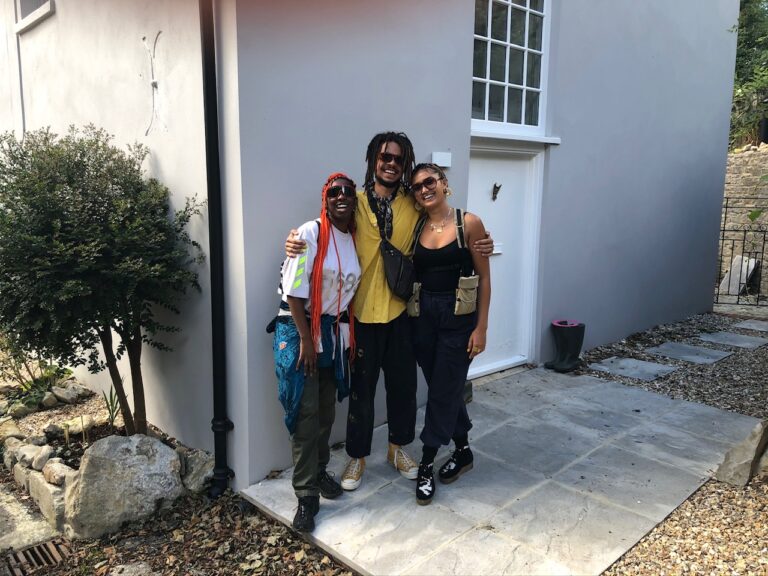