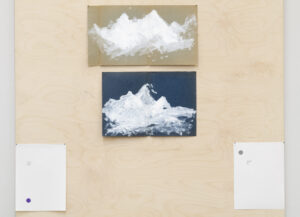 It is always changing. It has order. It doesn’t have a specific place. Its boundaries are not fixed. It affects other things. It may be accessible but go unnoticed. Part of it may also be part of something else. Some of it is familiar. Some of it is strange. Knowing of it changes it.
– Robert Barry, Art Work, 19701

For appreciating an artwork, is the person behind it of any consequence? Should we regard the work as a vehicle for the person, or vice versa?

The individual, the personal and the subjective are not the same, in art and elsewhere, but we can and ought to make room for all of them in any account – or appraisal – of an artist’s trajectory.

If we wish our analysis to make sense within a broader understanding of art and society, we are well advised to focus on the artwork as a function of all-encompassing inter- or trans-subjective mediation. Adorno, of course, has an aphorism about it:
Today immediacy of artistic comportment is exclusively an immediate relationship to the universally mediated.2

We should remind ourselves of this mediatedness whenever we consult an artist’s personal biography to illuminate his individual works, but then again we can’t draw a satisfactory map of the inter- or trans-subjective in his practice and oeuvre without first locating the subjective.

Calovski’s career as an emergent artist was kick-started when The House and Its Imperfections was shown in New York, first in Sideshow Gallery in Brooklyn and then in the exhibition ‘Selection Fall 1998’ at the Drawing Center.

The series of four large ink drawings on glued-together strips of industrial rice paper was made during his studies at Bennington, which included architecture, literature and anthropology, as an attempt at synthesis between sculpture and architecture.

The drawings are based on the floor plan, elevation, aerial and area views of his childhood home on the outskirts of Skopje. His father, the prominent poet and radio journalist Todor Calovski, had it built in the early 1970s, without an architect and without blueprints. A colour-coded wooden maquette of the house is also part of the overall work, which borrows its title from a short poem by Todor Calovski:

There is love in his hands
surpassed fear in his tools
and unyielding peace when he says:
‘First you build, then you repair’

We count the changes: me
my wife
my children
and we see that our house gradually loses
the strange sense of its imperfections
which we so much discussed late in the nights.3

The House and Its Imperfections marks the beginning of Calovski’s engagement with drawing in the public realm. It retroactively applies conventional visual systems for documenting the intentions behind a built structure, and then breaks this illusion by introducing illusory elements, such as the view through a window of the furnishings in a room, or pictorial traces of remembered actions in and around the house.

In this way, Calovski reintroduces a pre-modern practice that art historians call value perspective, highlighting our perception of what it considers to be the most important things: architecturally, visually, emotionally. It allows the work to tell the story both episodically and epically, and to cast a modest family home as an image of perfection.

After the exposure of The House and Its Imperfections at the Drawing Center, the Philadelphia Museum of Art acquired a large drawing from a subsequent series that continued to develop similar themes.

The rice paper strips reappear, now as a hanging screen ready to capture rays of Tuscan sunlight filtered through a camera obscura lens that yield images of a distant landscape, in the work Nevermind the View at Manciano, Province of Grosseto, in the warm summer of 2003.

Stanze, the villa where this composite installation was staged, had been the local headquarters of the Fascist Party before the war, and then for years a social club for railway workers, but it was abandoned for Calovski to ‘squat’ within the framework of an exhibition project titled “Quattro Venti”.

The works appraised in this chapter are labelled solo projects because Calovski must be fully credited for them artistically, but they often also involve collaborators from various fields.

To Manciano he brought two fellow artists. Ricard Torchia contributed the two camera obscura lenses: one focusing on the balcony just outside the smaller room in the villa, the other powerful enough to transmit views from the seaside 40 kilometers away onto the screen in the larger room. Sebastian Menendes helped to make recordings of environmental sounds from these two areas of uptake.

Nevermind the View was not only the spectacle, waiting to happen at any moment, of people and buildings and trees and the sky caught ‘in the act’ and turned upside-down as light-images onto gently fluttering rice paper; it was also the contrast between the shuttered and sunlit versions of the installation.

Both were rooms with a view, but the views were different. Darkness brought out the projection of the outside world, while light made it possible to see drawings and calligraphed texts (also on rice paper) pinned onto a wall and some old black-and-white photographs of railwaymen socialising scattered on a makeshift table.

This work, painstakingly put into place and seen by very few, radiates truthfulness in its approaches to the paper and lenses and sound equipment used, to the building and its obscure history, to the landscape and the light breeze outside, to drawing as the gesture that gathers these elements together – but also as a unifying note that doesn’t quite hold, “like the little crack when your voice breaks”.4

The following summer Calovski found himself working in another classical holiday getaway: the Swedish island of Gotland in the Baltic Sea. The result of his production residency at the Baltic Art Centre in Visby, Everything Is After Something, is an instructive example of how he integrates various practices and references into a composite whole driven by the mutually enforcing desires for articulation and construction, formulating a multi-layered message and delivering it on a purposely designed platform.

Let us unpack what this meant, in real terms, for Everything Is After Something.

The practices called upon were those of drawing (four large and predominantly figurative compositions in ink and gouache on paper), film-making (a silent black-and-white 8mm film), music (a live performance at the exhibition opening by Swedish band Sebastian & Sebastian, with the artist Tobias Sjöberg playing the accordion and singing a song written for the occasion), architecture (a platform, with variously raised levels, on which the entire project was exhibited) and research (the process of creating all the work’s components was documented in a xeroxed artist’s book).

The references animating the work ranged from the hybrid legal status of the small uninhabited island of Ar, a disassociate Swedish territory previously part of Gotland’s extensive defence infrastructure (in the film and the artist’s book) to the text piece Art Work (1970) by American conceptual artist Robert Barry (used with his permission as the lyrics for the song), Robert Smithson’s aerial footage of Spiral Jetty (1970) and Walter de Maria’s Two Parallel Lines (1968), also known as Mile Long Drawing (again in the film, with its aerial footage of small islands surrounding Gotland, and in the artist’s book).

In retrospect, the inclusion of Robert Barry’s text, and not least its rearticulation as song, is perhaps the most pertinent aspect of Everything Is After Something (a title referring to the practice of referencing) and at the same time the most prophetic, pointing forward to Calovski’s collaborative and research-based work practice in the years to come.

The four large drawings seem less concerned with research, but they do function as a storyboard for the entire project, perhaps even as a mood board channeling its wider personal and art-specific meaning.

When Kohta invited Calovski for another production residency in Helsinki in the winter of 2020, one of the points of reference was the scale and ambition of that series of drawings from 2004.

Another reference was the work Personal Object (2017–2018). In its first incarnation it consisted of two metal hooks, a tongue-like piece of pulled synthetic rubber, brown foundation makeup that had belonged to Calovski’s late mother, Biljana Calovska, and a pane of milked glass from a building in downtown Skopje put up as part of the reconstruction after the devastating earthquake on 26 July 1963.

1. Quoted from the xeroxed catalogue for the exhibition “Everything Is after Something” at BAC, Visby, 2004 (unpaginated).
2. Theodor W. Adorno, op. cit., p.219.
3. Poem translated from the Macedonian by Zoran Ančevski and Dragi Mihajlosvki, in Todor Čalovski, Building a Dream.
Skopje: Sv Kliment Okhridski, 2011, p.142.
4. Yane Calovski, in conversation with the author on 22 May 2020.

* This text is written by Anders Kreuger for the exhibition of Personal Object by Yane Calovski at Kohta, Helsinki, 12 March – 8 August 2020.

The full essay can be read at: 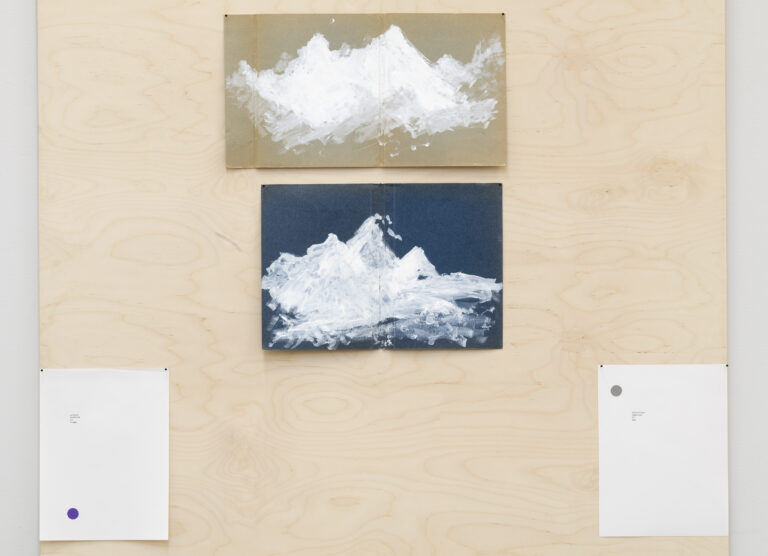