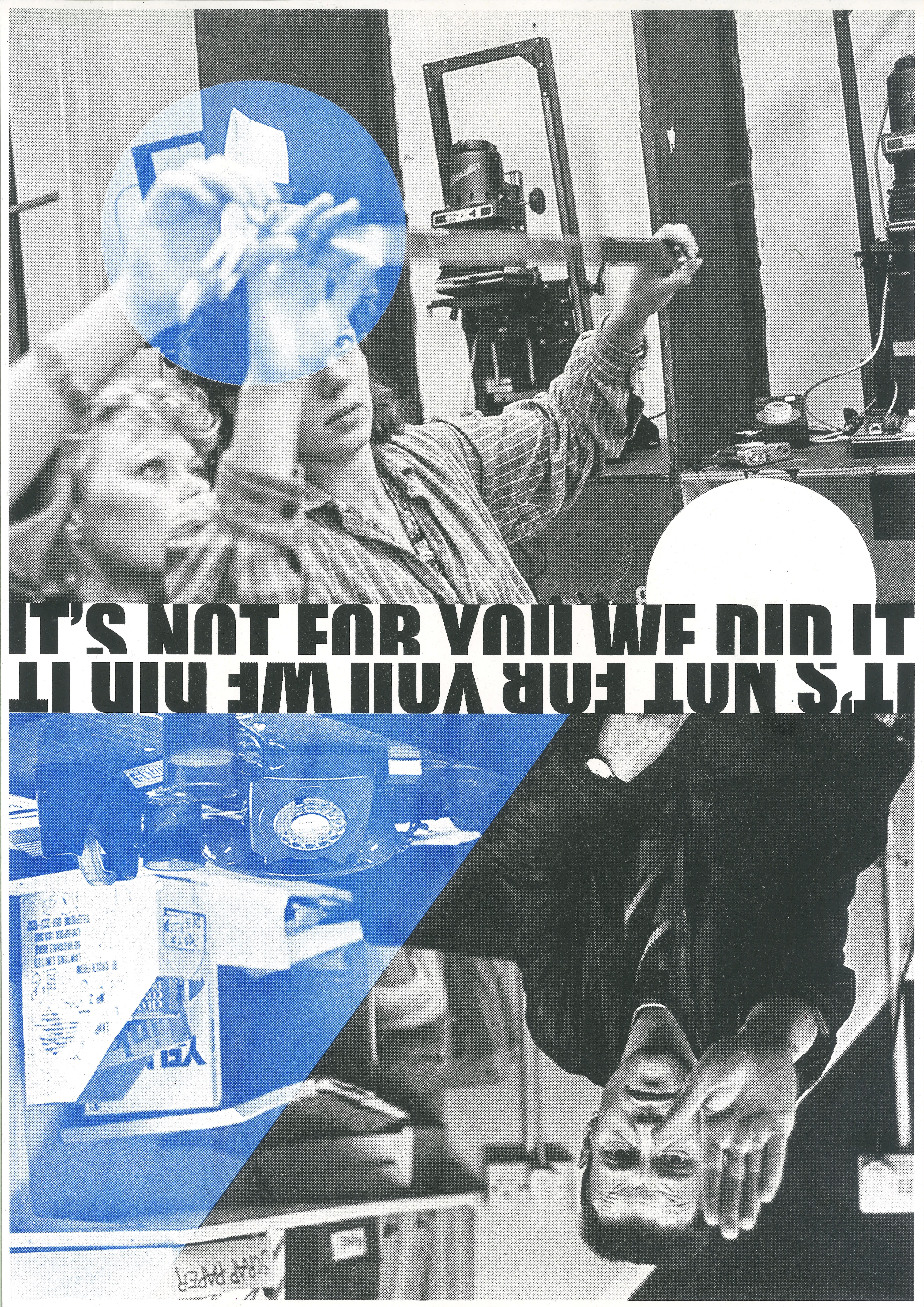 It’s not for you we did it, poster #2 by Ciara Phillips.  Photographic images, Creative Commons BY-NC-SA, Camerawork Derry.
Image description: Reversible poster in black and white with blue and white geometric elements. One image shows two people looking at a roll of photographic negatives together. Another person holds a hand up as if to block the picture being taken. The text IT’S NOT FOR YOU WE DID IT is in the centre of the page, facing up and inverted, so the poster can be viewed with either side up.

The project, It’s not for you we did it 1, began through an interest in the work of Derry Film and Video Workshop2 (DFVW). Established in Derry in 1983 and operating until 1989, the workshop was one of the companies formed under the terms of the 1982 Workshop Declaration—an initiative of The Independent Filmmakers’ Association, the British Film Institute, and ACTT (the Association of Cinematograph, Television and Allied Technicians). The workshop movement sought to democratise the process of filmmaking and distribution, and amplify the voices of those who were marginalised on the basis of race, gender, geography, sexuality and class. Workshops such as Sankofa Film and Video Collective (with notable members including Isaac Julien), Black Audio Film Collective (including John Akomfrah), and Amber Film & Photography Collective were also supported under this scheme. Newly established ‘publisher broadcaster,’ Channel 43, provided the platform to distribute their works. Largely omitted from histories of these regional, minority, South Asian and Black workshops as well as from histories of feminist counter-cinema, DFVW explored overlapping political tensions around gender, class, the Irish ‘national question’ and legacies of imperialism.

Convened around a set of methods that included collective structures and self-representation, DFVW produced a number of films including Stop Strip Searching, Planning, Mother Ireland and Hush-a-Bye Baby as well as enacting various forms of community cultural education.4 Working to counteract the epistemic violence of depictions of the north of Ireland, its conflict and its people by British TV news and cinema, members of DFVW sought to tell a different story about their lived political and social realities.

In the process of researching DFVW and talking with former members of the collective and the broader community, a picture began to emerge of the complex web of relationships and conditions that fostered its formation: of the groups and movements that were the precursors to DFVW and of the impacts that DFVW had, in turn, on subsequent political and cultural projects. The dossiers in It’s not for you we did it will touch on some of the converging factors that created both the urgency and space for DFVW to be established and sustained. The political context of Derry in the 1980s was shaped by the H-blocks prison Hunger Strikes of 1980/81, which had a galvanising effect on a new generation of activists. Broadcasting bans were in place in both Britain and Ireland that prevented the voices of people with a connection to ‘terrorist’ organisations to be heard on television, and groups like DFVW experienced direct state repression and censorship. Political concerns that cut across the national question were equally present: the economic recession of the 1970s and 80s led to mass unemployment; points of friction between reformist and radical feminist politics fractured the nascent women’s movement in Ireland. But equally, there were well-developed networks of political solidarity that responded to these conditions, and DFVW benefited from the efforts of a handful of key people in providing resources, organisational models and support.

These histories are messy, incomplete—projects have faded from collective memory because of their limited lifespan; there is no agreed narrative among those who were involved. But from these conflicting stories, we can diagram a set of cultural and political tools, sharpened by the experience of coloniality, state violence, poverty, homophobia, patriarchy. By gathering an archive of these relationships, methods, and spaces of activity, It’s not for you we did it aims to draw these projects into conversation with our own urgent political and cultural concerns today.

Each research dossier will be accompanied by a downloadable poster by Ciara Phillips. A limited-edition of risograph printed versions of this first poster will be available from the offices of EVA International. Further details to follow.

It’s not for you we did it is prepared by curator Sara Greavu and artist Ciara Phillips. Supported by Arts Council Northern Ireland and British Council Ireland. 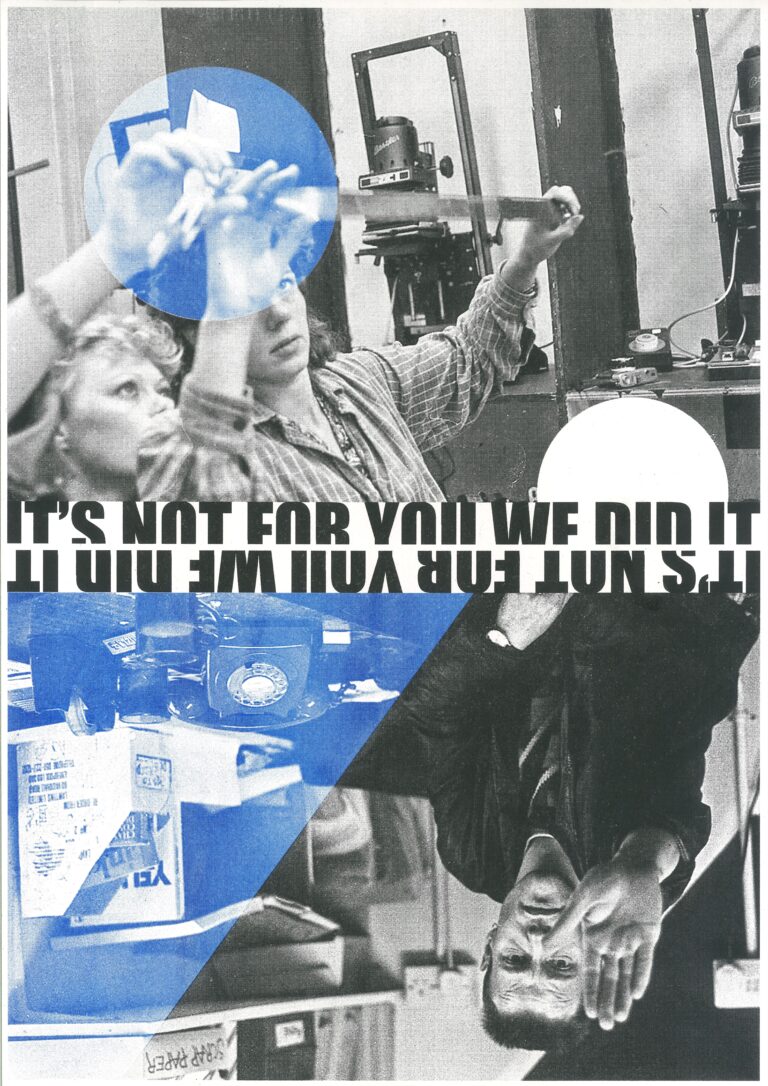 Scanned risograph version of Poster 1, It’s not for you we did it Image Description: Reversible poster in black and white with blue and white geometric elements. One image shows two people looking at a roll of photographic negatives together. Another person holds a hand up as if to block the picture being taken. The text IT’S NOT FOR YOU WE DID IT is in the centre of the page, facing up and inverted, so the poster can be viewed with either side up. Photographic images, Creative Commons BY-NC-SA, Camerawork Derry.
Back to index