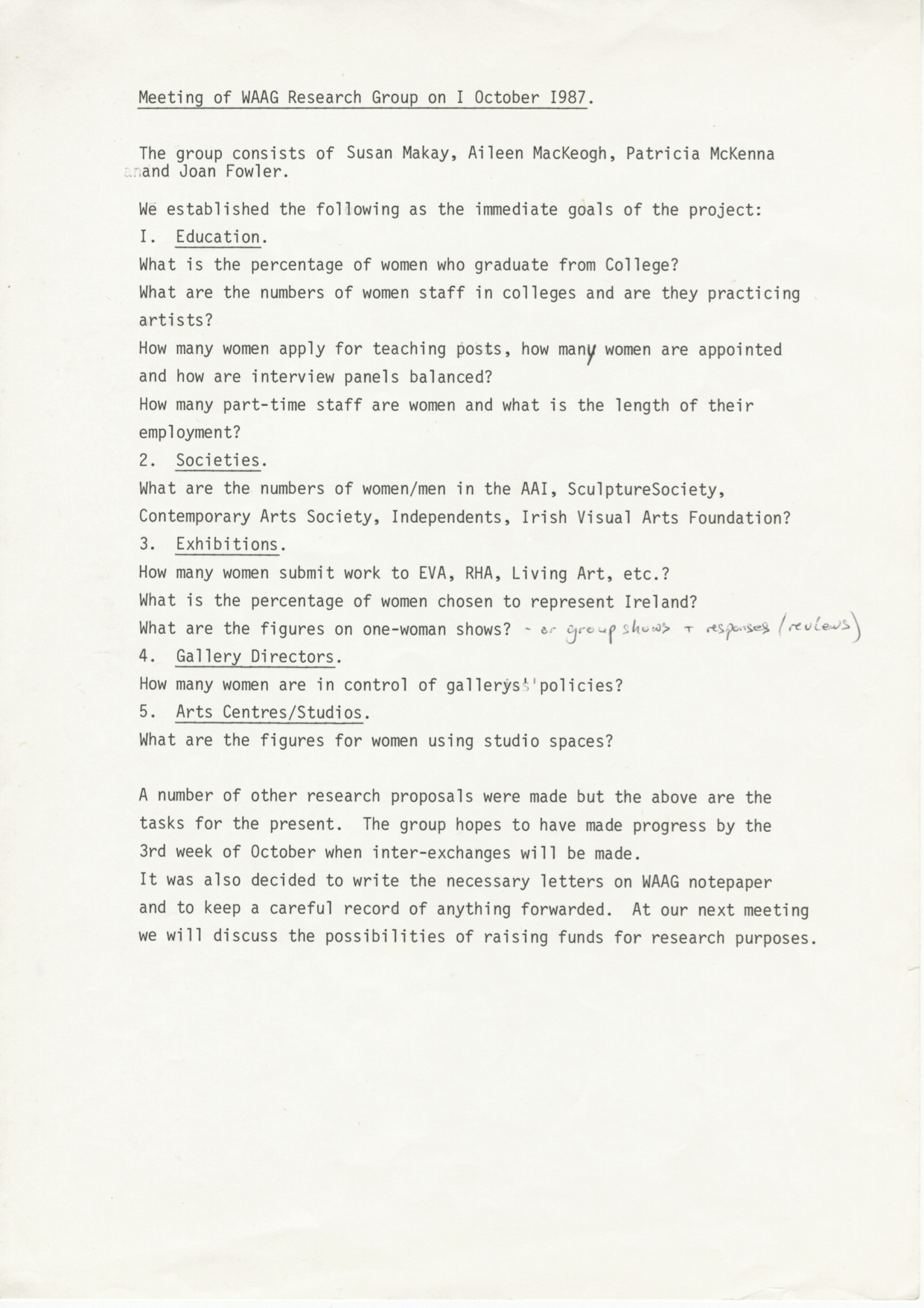 Women Artists Action Group (WAAG) was established thirty-five years ago as a ‘multidisciplinary’1 organisation, with a core membership that included women art historians, curators, and critics as well as artists. From the outset, WAAG’s founders prioritised research, conferences, exhibitions, and publications’ as core activities, suggesting an expansive vision of arts work. In 1987, WAAG founder member and art historian Fionna Barber lamented the fact that women’s labour of support, whether performed in the home or the workplace, remained ‘invisible.’ She specifically cited the role played by women who had helped to establish galleries in the north of Ireland, or contributed to the editorial panels of art magazines such as CIRCA.2 WAAG’s constitution—drafted in 1988—recognised the importance of many different forms of women’s work, expanding membership eligibility to include administrators, researchers, and students. The constitution is also striking for its emphasis on formal organisational structures, including an executive to be composed of a chair, secretary, treasurer, as well as ‘publicity and regional representatives.’

One of WAAG’s first actions was an exhibition of slides documenting artworks by women, held at Project Arts Centre (Dublin). It presented as a counterpoint to the ‘official’ exhibitions organised at the Douglas Hyde Gallery, the National Gallery, and the Hugh Lane Gallery to coincide with the 1987 Women’s Worlds Congress. WAAG also aimed to establish a slide library that would exist as a more permanent resource. New members were invited to submit slides, and workshops were suggested to improve the quality of photo documentation. If it had been established, the library could have given a material (and infrastructural) form to WAAG’s multidisciplinary ethos.3 It would have served the needs of WAAG members in different ways, benefitting art researchers, curators, and art historians as well as potentially creating professional opportunities for artist members.

Some Irish women artists had already succeeded in securing funding for collective structures. The first cooperative artist studios in Ireland were founded by women in the early 1980s. According to artist Mary Fitzgerald, the practical, legal and financial problems associated with the co-op model ‘demanded a new response from the funding institutions and […] changed the relation between State bodies such as the Arts Council and their clients’.4 But while the Arts Council was open to new modes of studio organisation, the slide library might have presented a greater challenge to its remit, precisely because it would have served a multidisciplinary constituency.

During its first year of existence, WAAG sought to define its role and objectives in consultation with its members. Following the exhibition at Project Arts Centre, WAAG established a Research Group, which reflected its multidisciplinary ethos by including art historians and critics as well as artists.5 Handwritten notes from the group’s first meeting, in October 1987, refer to ‘a developing research brief’, indicating that findings would guide ‘future directions.’ But the typed minutes of that session communicate a greater sense of urgency, outlining an ambitious set of ‘immediate goals.’ In particular, the group wanted to gather data on women’s participation in art education (both studying and teaching), professional art societies, exhibitions, gallery organisations, and studios. Most of this information was to be sourced directly from members via a survey, which appears to have been first distributed in November 1987.6 Despite WAAG’s multidisciplinary composition, the questionnaire seems to have been oriented mainly towards artist members. Respondents were asked in one of the opening sections whether WAAG should prioritise ‘contact with other women artists.’ In a later section, members were surveyed on various possible workshops, including sessions on ‘preparing slides of your work.’

The WAAG membership survey addressed the challenges faced by women artists, in terms of securing resources, or managing ‘domestic commitments.’ It also included several questions on art education, and it revealed that a high proportion of members were teaching at third level, mostly part-time.7 The Research Group also sought to gather employment data directly from art colleges. In October 1987, they drafted a letter citing ‘current figures’ on the staffing of Fine Art courses—92% male and 8% female—at odds with the ‘high public profile’ of women artists in Ireland.8 This letter, which acknowledged the impact on the ongoing economic recession on staffing, requested information on the gender breakdown of applicants for the last three full-time positions, and for the related interview panels. Responses to this letter, if any were ever received, are not included in the files.

The questions posed by the WAAG research group remain relevant today, as evidenced by the introduction of institutional initiatives to promote diversity9, such as the Athena SWAN charter. Established in the UK in 2005, the charter initially focused on measures needed to improve gender equality in science, technology, engineering, mathematics, and medicine. In 2015, the charter was extended to the arts and humanities, and also introduced in Ireland, with an expanded remit to address the experiences of trans staff and students, as well as the underrepresentation of men in some disciplines. Following a report on the Irish context, the Gender Action Plan 2018-2020 was published. It outlined specific objectives, including the implementation of funded ‘family-leave’ structures to support staff with caring responsibilities.

The action plan requires Irish higher education institutions to ‘gender-proof’ their recruitment and promotion procedures and practices.10 For example, they must ‘strive for’ gender balance in the final pool of candidates for all competitions, including senior positions. Clearly, progress has been made since WAAG raised the issue of gender parity in Irish art colleges, at least in terms of policies and reporting mechanisms. But the Irish higher education sector remains underfunded by comparison with European counterparts, and it is also undergoing changes that may impact recruitment and promotion of women in art education. The sector encompasses both universities and institutes of technology, which have different governance regimes, employment structures, and staff-student ratios. Since the 1990s, the majority of studio-based art programmes have been located within Institutes of Technology.11 Yet many of these institutes are now being reconfigured as technological universities, with an increased focus on research and greater demand for lecturing staff to hold or pursue doctorates.

Many Irish women artists continue to teach on art programmes, but it is difficult to know what will be lost or gained by women artists as a consequence of these sectoral changes. If research becomes a more integral part of the lecturing role (as seems likely within a university economy), what forms of research will be recognised for the purposes of recruitment and promotion? How will lecturer’s individual research workloads be balanced against other demands, including caring responsibilities? New barriers may emerge for women artists, unless supports are increased for early-stage art researchers. Funding for practice-based art PhDs is currently very hard to secure in Ireland and far too low to cover the cost of paid childcare.12

The Gender Action Plan endorses the use of Workload Allocation Models, which are more widely used in Irish universities than Institutes of Technology. These models are supposed to ensure appropriate and fair distribution of work, but this distribution is often gendered. Women are frequently assigned administrative and support responsibilities, while men may be allocated tasks typically regarded as more valuable in terms of ‘preparation for promotion.’13 To address this issue, the Gender Action Plan recommends that workloads should be closely monitored by managers for gender bias. Maybe, however, it is time to rethink the values assigned to different forms of work. Institutions are now required to facilitate caring responsibilities outside the workplace, and this is long overdue. But other forms of care and support, performed within organisations, continue to occupy a low status.

Certain forms of ‘service,’ such as committee membership and the peer-reviewing of research publications, are widely recognised within academia. But other forms of work, intended to effect (or demonstrate the appearance of) constructive institutional change, can be unrewarding on many levels.14 There are also very few mechanisms to recognise or reward the everyday care and support work needed to support learners and colleagues. The gender action plan recommends distributing tasks that are deemed to provide ‘preparation for promotion,’ more fairly between men and women. But why not reconsider how value is actually assigned to labour, so that those with ‘support responsibilities’ are deemed worthy of promotion?

During its relatively short history, WAAG sought to increase the representation and visibility of women artists through an extensive programme of exhibitions and conferences. But its less public outcomes, including relatively mundane organisational documents, such as agendas, minutes, and research notes, are also important in their own right. Handwritten, typed, and often annotated with corrections, these are working documents, oriented towards the future. Communicating a sense of optimism, while also insisting upon the need for change, they are the material evidence of support work, which is vital even when it is performed below the threshold of visibility. 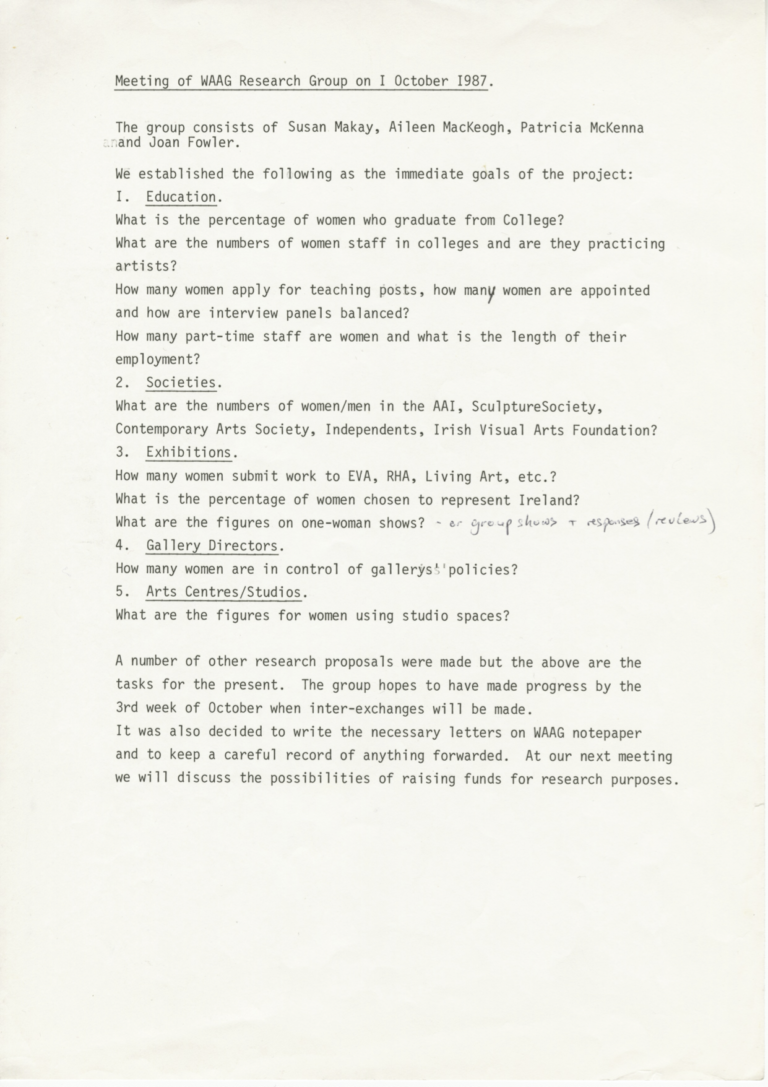