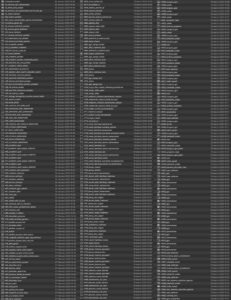 “To define ‘creative’ in film editing we begin with Margaret Boden’s definition of creativity as ‘the ability to come up with ideas or artefacts that are new, surprising and valuable’ (itals in original) (Boden 2004: 1). From there, we draw on editing theory being generated in the Soviet Union in the 1920s. Soviet montage theory generally proposes that editing creativity includes not just creativity at the level of making a whole film that is ‘new, surprising and valuable’ (Boden 2004: 1), but at the level of each specific shot to shot juxtaposition, too. Each edit is a creation, new and potentially valuable to the whole. When making a new film, the precise choices of shot selection and timing are made through a series of individual expert judgments that form the edited patterns. Thus, the editor’s ‘technical’ work is the work of embodied expertise shaping the edits. Editors’ timing, pacing and trajectory phrasing, in other words their design of the temporal and kinetic flow of a film, is manifested through the work of physically cutting and joining shots (see Pearlman 2016). Here we argue that the expert judgment of fluent execution of work with the tools of editing will necessarily, at least in some instances, overlap with the expert creative judgment that results in a film’s form. But which instances?

This case for an editor’s creative expertise is explicitly made about Svilova by Pearlman, MacKay and Sutton. They analyse visible evidence to demonstrate Svilova’s expertise and creativity in her processes with Vertov. The same understanding of creative expertise is reinforced by editor Vera Popova’s contemporaries, such as Kuleshov, when they say she was indispensable to their work. (See Izvolov 2018). Creative editing expertise is also the specific kind of artistic judgement that can, on a Soviet montage account of the power of editing, result in the creation of whole films from diverse and otherwise unstructured footage, sometimes called compilation films. (See Kaganovsky on Shub and Svilova, 2018, and Heftberger on Brik, 2018).

What is unknown is where, when and how often the fluent work of hands and visual memory participated in the decision making that generated unique, precisely selected and timed individual shot to shot juxtapositions and patterns of shots. We know, from Shub’s testimony, that in the case of the women called montazhnitsa this kind of creative participation was rare, if it occurred at all. On the other end of the spectrum we can see from their work and their own writings that in Svilova and Shub’s cases it was ever-present. However, the sliding scale in between is where the work of editors is occluded. This is in part because, as will be discussed below, the names for editing workers did not keep up with the rapidly changing roles being performed and technologies through which expertise is expressed.

Collectively, the articles in this issue are shifting understanding of the editor’s work from ‘merely’ technical or ‘just helping’, which is a gendered erasure of women’s work, to understanding it as expert collaboration in filmmaking. In other words, creative work. Why is this important? Because by obscuring the creativity of the work of the hands of women who watched, sorted, cut and pasted frames of film together we obscure the women themselves.

As Gaines and Vatsal note about film in Hollywood before 1925: ‘some departments became exclusively organized along gender lines, with editing or joining being the most visibly gendered work’ (Gaines and Vatsal 2011: 2). They also note that editing was seen as ‘a purely mechanical and tedious undertaking’ (2011: 37). Now it may be the case that film splicing could make only a very limited creative contribution to storytelling in the earliest days of film, when the job was more or less to join the shots end to end. However, that does not excuse the glaring oversight or possibly even motivated blindness of the historiography of film: that as soon as editing takes on formally unique characteristics and becomes part of expressive narration of ideas, it involves creative decision-making.

Why have the cognitive actions of editors been so often overlooked as creative contributions? This begins to smell distinctly unsavoury when we realise it is work that may have been done by women. There are cultural and historiographic questions to be grappled with. As Orpen notes: ‘editing as an expressive technique is largely taken for granted’ (2003: 3). Were women eventually excluded from most jobs in filmmaking but able to work in editing departments because the creative decision making of editing was unrecognised? Or could it be that the creative decision making of editing was unrecognised because it was work done by women?

Perhaps the historical mis-recognition of editing expertise lies with the underlying cultural assumptions inherent in one of the most common claims about film editing: that it is hard to write about because it is ‘intuitive’. Let us consider this word ‘intuitive’, a word so often associated with women, for a moment. Intuition is a highly-prized quality in creative work, and there is no need to reduce or belittle its significance, but there is a need to understand how it may be being used culturally, whether intentionally or not, to obscure the work of editors.

Intuition is not the same as instinct. It is learned, developed, and strengthened through cultural practices with culturally specific tools (see Sutton 2007, McIlwain and Sutton 2014, Theiner and Drain 2016). Intuitive is a word often used by expert practitioners of any skill as a blanket term for expertise that has been developed and is executed through fleet, embodied processes. Intuition is the word practitioners use for the ‘intrinsic and entirely worldly aspect of certain forms of real-time, on-the-fly engagement in complex, culturally embedded physical activities’ (McIlwain and Sutton 2014: 656) Speaking from first-hand experience and many reports by editors (see Oldham 1992 and Oldham 2012), it is possible to say that editing is one such complex physical activity.

Intuition is also, however, a word that experts use to draw a protective veil over practices, to ‘terminate discussion rather than open inquiry’ (Schon 1983:1). It is generally thought that this veil of secrecy is protective of artist’s intuition, that ‘thinking too much’ at a conscious level will disrupt their expert intuitive processes. This, again speaking from first-hand experience, can sometimes be true. It is vital that flow of creative decision making not be interrupted by asking how the decisions are being made while in full flight of creativity. However, when reflecting on editing processes outside the editing suite, the general tendency to keep the veil in place with the word ‘intuitive’ is not protective, it is obstructive. It obstructs recognition of the embodied intelligence, insight, and expert ability involved in editing. It allows the words ‘just’ or ‘merely’ to creep into the discussion of technical and creative expertise involved at all stages of the process.”

* This text is written by Karen Pearlman and Adelheid Heftberger and published by Apparatus.
The full essay can be read at: https://www.apparatusjournal.net/index.php/apparatus/article/view/124/276

Orpen, Valerie. 2003. Film Editing : The Art of the Expressive. London. 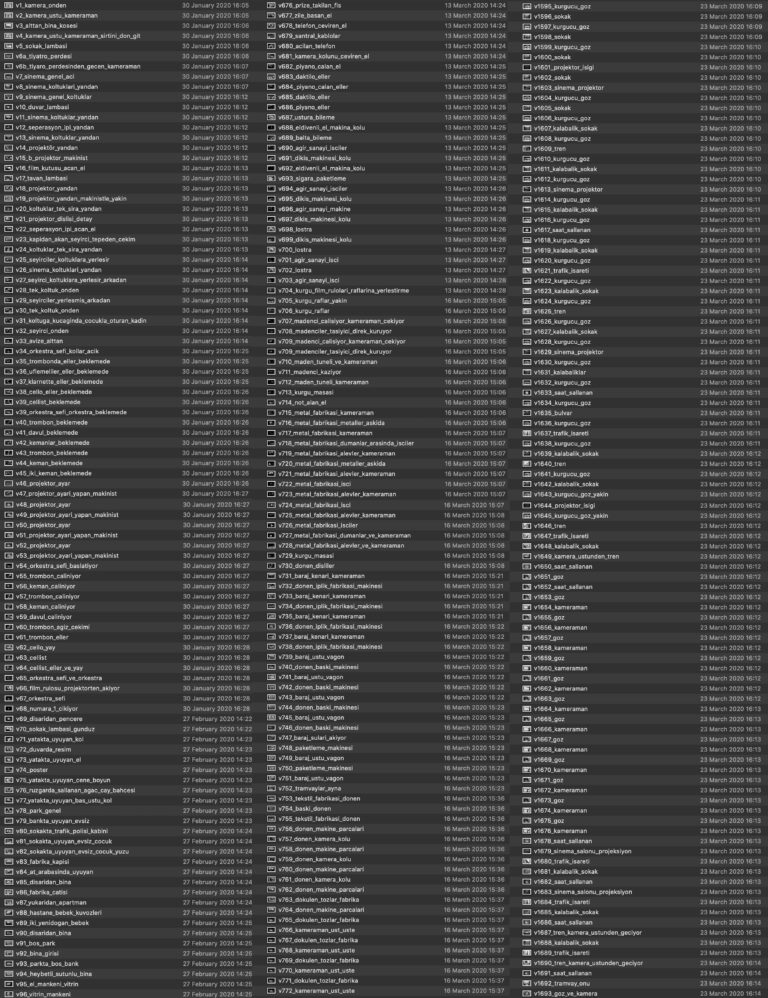 Zeyno Pekünlü, working document of Without a Camera, 2021
Back to index