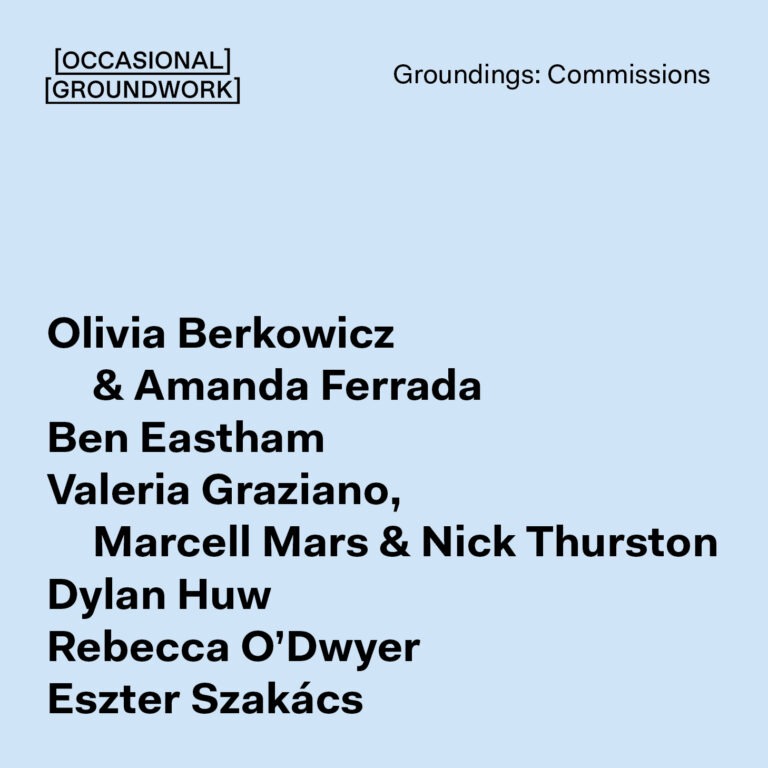 Biographies
Olivia Berkowicz is a curator, writer and editor. Her practice explores the intersection of critical visuality studies and contemporary art theory. Olivia is interested in vocabularies and practices which challenge modernist-colonial principles of exhibition histories, art production, and collaborations. Together with Marianna Feher, she organises Tentative Transmits (2020-2022), a discursive radio project investigating the ”former East”.

Ben Eastham is editor-in-chief of art-agenda, the division of e-flux devoted to contemporary art criticism, he is also the co-founder of The White Review, an arts and literary quarterly. Ben is the editor of multiple books including Luis Camnitzer: One Number Is Worth One Word (Sternberg/e-flux, 2020), Fabio Mauri: Before or After, at the Same Time (Hauser & Wirth, 2019), and The White Review Anthology (Fitzcarraldo Editions, 2017).

Amanda Ferrada is a project manager and coordinator for outreach work at the contemporary art museum Grafikens Hus in Södertälje, Stockholm. Currently, she is undertaking a consultancy assignment as a cultural strategist for the Public Art Agency- to continue working with outreach and inviting broader audiences to the Contemporary Art Days 2021.

Valeria Graziano is a media theorist and activist, who has evaluated public-academic links for several arts organisations, such as ‘Public Programming?’ which looked at the phenomenon of academic-like events within the sphere of museums, biennials and festivals. Valeria is co-director of Pirate Care Syllabus, which fosters a transnational network of activists, researchers and practitioners against the criminalisation of solidarity and for a common care infrastructure.

Dylan Huw is a writer, critic and editor based in Cardiff, Wales, where he works collaboratively across contemporary art, performance and publishing. He is co-creator of the print publication mwnwgl, commissioning new art/writing and artists’ projects in and around Welsh languages, and is currently a Creative Associate with the rural contemporary art organisation Peak Cymru.

Marcell Mars is a free software advocate, cultural explorer, and social instigator.  Marcell is co-director of Pirate Care Syllabus, which fosters a transnational network of activists, researchers and practitioners against the criminalization of solidarity and for a common care infrastructure. He is also the co-founder of the shadow library network Memory of the World.

Rebecca O’ Dwyer is an art critic and writer based in Ireland and Berlin. She holds a PhD from the department of Visual Culture at the National College of Art & Design, where she wrote about art criticism and capitalist realism. Rebecca’s writing has appeared in publications such as Paper Visual Art Journal, Source Photographic Review, Art Review, frieze and elsewhere; she is working on a book length collection of essays exploring ideas of bad faith, slowness and public space.

Eszter Szakács is a researcher, curator and Ph.D. candidate at the University of Amsterdam, where she’s undertaking a project titled IMAGINART—Imagining Institutions Otherwise: Art, Politics, and State Transformation. Eszter is on the curatorial team of a grassroots civil initiative OFF-Biennale Budapest, and recently co-edited a forthcoming anthology with Naeem Mohaiemen, Solidarity Must Be Defended (tranzit.hu, Van Abbemuseum, SALT, Tricontinental, and Asia Culture Center).

Nick Thurston is a writer, editor and an associate Professor at the University of Leeds. Nick has expertise on DIY publishing, and was profiled on PCS for Art Monthly (no.440, Oct 2020), he has also written journalism and criticism about open access arts resources, such as ‘Happy Birthday Ubu’, Frieze, Oct 2016.