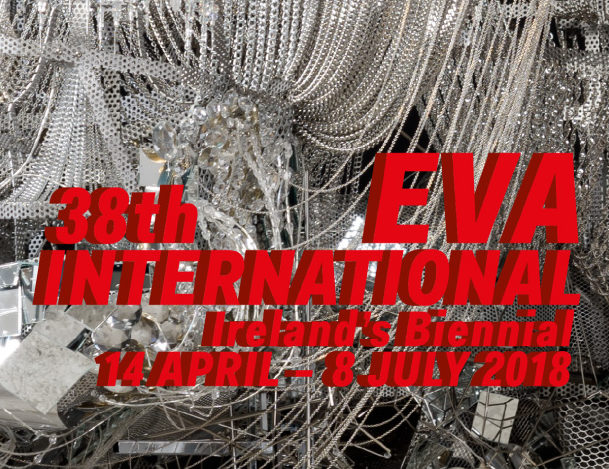 The 38th EVA International featured historical, recent and commissioned works by 56 artists in exhibitions across five venues in Limerick city with an extended programme at Irish Museum of Modern Art, Dublin.

Curated by Inti Guerrero, the 38th EVA International took its starting point from the painting Night’s Candles are Burnt Out (1927) by Irish artist Seán Keating. The painting presents an allegory of the Irish psyche at the time of the construction of Ardnacrusha, a hydroelectric dam built that same year on the border of County Limerick. Ardnacrusha, constructed in the early twentieth century, accelerated the national economy and radically shifted the society of the new Irish state. Keating’s social realist painting depicts a host of characters set against the backdrop of the construction site of the dam, whose lives are set to change by the dawning of a new era of technological progress.

Alongside Keating’s paintings of Ardnacrusha, the biennial included works by artists from across geographies, generations, and media, addressing narratives of modernisation (in which electrification played a crucial role) and metaphors of power. Rather than a monolithic thematic exhibition, this edition of EVA International proposed itself as a kaleidoscope of essayistic, retinal and bodily narratives of artistic presentation.

The 38th EVA International had no title, breaking with a tradition that dates back to 1990. This decision, taken by curator Inti Guerrero, was designed to emphasise the word ‘international’ that (since 2012) has been central to EVA’s identity. Guerrero explains: “In our current state of nationalisms, hard-borders, protectionism and a complete change of course in humanity, where the liberal belief of a ‘never again’ seems to be dismantling, the word ‘international’ suddenly carries an important weight worth embracing. Since its foundation in 1977 in Limerick, EVA has been a forerunner in understanding the world through art in a transnational, transcultural, international dialogue, presenting its contradictions, anxieties and possibilities.”

Catalogue
A 328-page catalogue was published to coincide with the 38th EVA International, featuring texts by Inti Guerrero, Joan Didion, Sorcha O’Brien, and Emer O’Toole. Copies of the catalogue are available to purchase here.