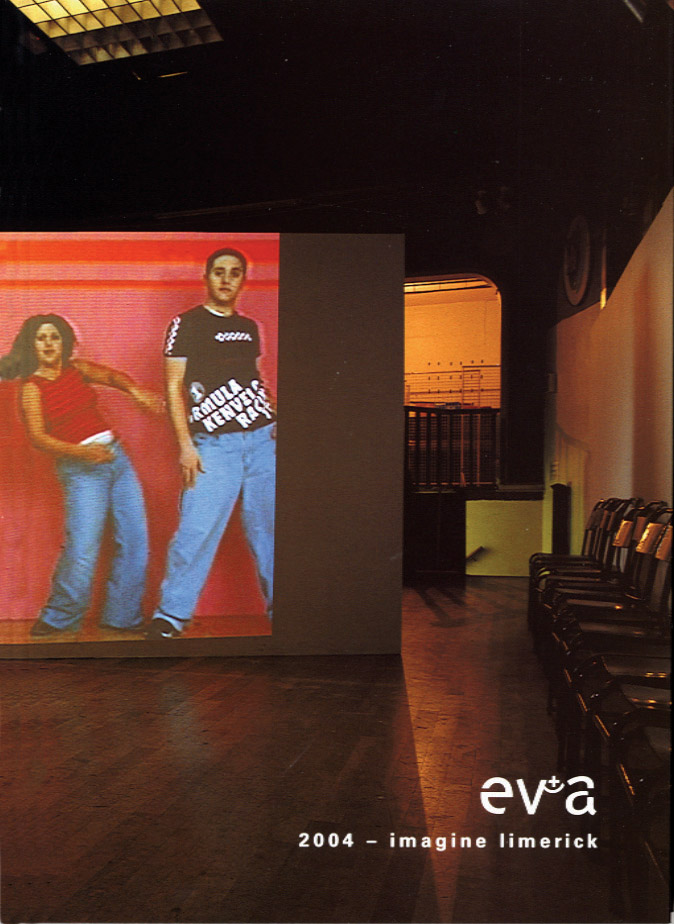 In 2004 ev+a was titled ‘Imagine Limerick’ and curated by Slovenian curator Zdenka Badovinac. Badovinac’s edition of EVA responded to the city of Limerick, “I decided long ago that my curatorial approach would not be academic – academic in the sense of some abstract construct I would bring with me to a given referential environment, and there forcefully try to implement it as a framework for my project. Whenever I am invited somewhere as a guest curator I try to base the formulation of my concept on the given situation, on the here and now. […] The aim of the exhibition is to draw attention to the ideology of the visible existence of conflicting interpretations and to the illusory nature of the known. […] The exhibition Imagine Limerick will pertain to the relationship between tradition and modernity in Ireland, which can serve, first and foremost, as a model for similar situations all over the world” [taken from Badovinac’s introduction to the 2002 catalogue].

Badovinac invited 22 artists to participate in the Imagine Limerick exhibition and she selected another 22 from the 500 who had entered Open ev+a. For Young ev+a artists worked with young people in three community groups outside the usual school structures, Limerick Travellers Development Group, St Mary’s Youth Project, and Southside Youth Initiative with an exhibition at Belltable Arts Centre.

In 2002 Limerick was linked with Slovenia as part of the EU enlargement celebrations, and ev+a was supported by the cultural programme of of Ireland’s presidency of the European Union.