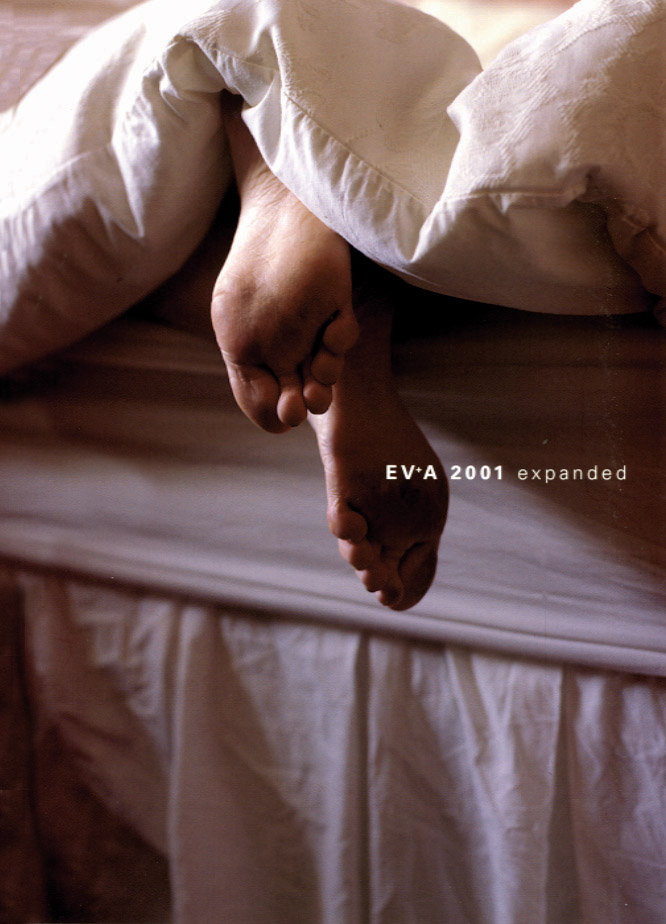 New York based Curator, Salah M Hassan together with his friend Muhammad Iftikhar Dadi – an American-based Pakistani artist who assisted him in adjudicating EV+A 2001 –  selected 88 artists to exhibit as part of EV+A Expanded. Of the 500 works submitted to Open EV+A, Hassan noted that the majority were by artists of European descent living in Ireland or the rest of Europe. “This striking observation […] has prompted us to invite five artists of non-Western origins to participate in EV+A 2001, despite our realisation that this is not the invited EV+A which takes place every other year. It is also true that EV+A is primarily a contemporary Irish art event, but according to its rules, it has always been open to all artists around the globe” [taken from Salah M Hassan’s Introduction to the 2001 Catalogue].

Hassan decided, instead of giving away direct financial rewards, to use the award funds to find ways for the artists to participate in workshops and artists’ residencies overseas. Four winners were selected to participate in Triangle Network residencies and workshops abroad. Triangle Network is a global network of artists and visual arts organisations that support professional development and cultural exchange amongst artists, curators and other arts professionals throughout the world.

In an essay that placed EVA within an Irish art historical context, Medb Ruane commented that, “EV+A […] anticipated the rise and rise of the Curator as Artist – a practice now set in stone on the wider global stage” [taken from Mebd Ruane’s Notes on EV+A in the 2001 catalogue].

The 15th Young EV+A programme included contemporary artists, with past or present connections to EV+A, who met a dedicated group of young adults, chosen with the help of the art teachers, in various secondary schools in Limerick. This was followed by an exhibition at Belltable Arts Centre run concurrently with EV+A 2001.