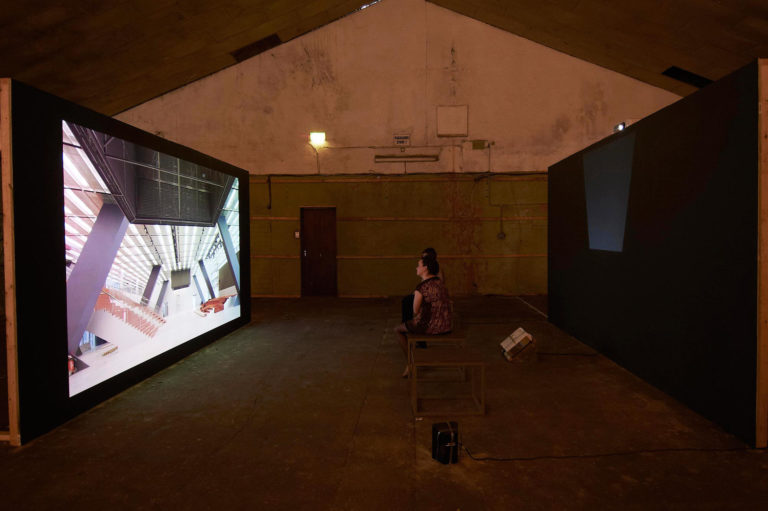 In Light of the Arc goes inside Shenzhen’s future stock exchange, once inside, a series of relations appear between the material infrastructure required by today’s financial system and the surface of exchange that results from this infrastructure. While today’s markets are touted as pure arenas for efficient price formation, the work suggests that these prices are but one side of the equation. The material underbelly cannot be made to disappear simply through the abstraction of an economics that has become obsessed with an efficiency measured through abstract notions such as liquidity and risk, terms which have themselves been reduced to a technical language that avoids any reference to the meaning which they have outside of this discipline. In Light of the Arc proceeds by way of other images, the construction of which is never entirely complete. These incomplete images attempt to capture a process of materialization in a place that will soon be driven by dematerialization. The film is split between two screens positioned opposite each other and projected from the same angle that the shots were originally taken from. The familiar tapering of the building facade as it stretches upward is here corrected by the angle of the projection, so that the building remains the same width at both the top and bottom. It is what would be seen from an ideal point where the facade would not be affected by perspectival space, an ideal view that is only achieved through a severe distortion of all that surrounds it. Supported by Mondriaan Fund.

Zachary Formwalt was born Albany, Georgia (USA) and has been living and working in Amsterdam since 2008. He has presented solo projects at VOX Centre de l’image contemporaine, Montreal (2013); KIOSK, Ghent (2013); AR/GE Kunst, Bolzano (2011); Casco—Office for Art, Design and Theory, Utrecht (2010); Wexner Center for the Arts: The Box, Columbus, OH (2010); Kunsthalle Basel (2009). In 2013, his film, “Unsupported Transit”, was awarded a Tiger Award for Short Films at the IFFR and the Dialogpreis at EMAF.