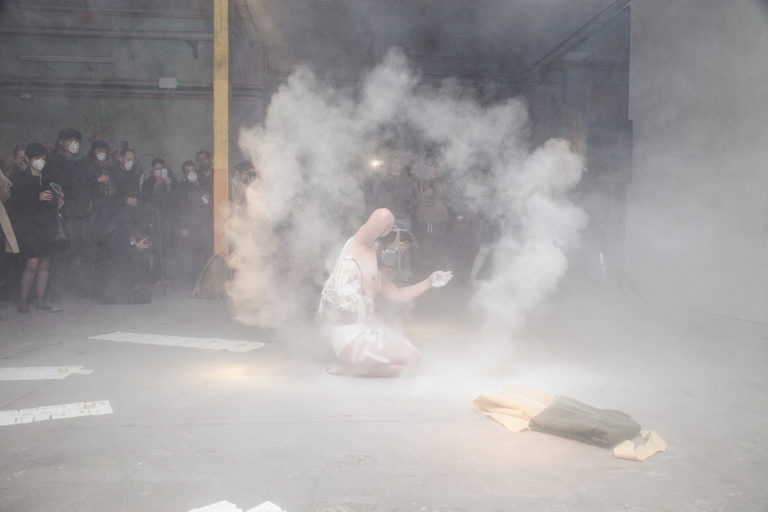 Yong Sun Gullach is a video artist, poet, and activist who uses a variety of different media, including installation art, film, music, noise, performance readings, and poetry. Her main themes investigate hidden or subconscious emotions and traumas to uncover stories that are embedded in everyday life. Her work stems from her own experiences of gender, race, identity, and nationality.

‘I do not construct reality – my body is reality,’ says Yong Sun about her practice in which she investigates a lack of self-understanding she or others might have and how to overcome such feelings that something is missing. Yong Sun considers performance as a way to let body and space unfold in all of their complex dimensions and to investigate the relations of co-creation between artists and spectators. Her aim is to create an impact by means of physical ‘traces’ left on other people’s memories, and to make this dialogue visible. Deconstructing her feeling of loss through this exchange, she tries to construct a narrative that conjures up fundamental feelings in the audience.

Re-enacting the Transnational Adoptee (2015) is a thirty-minute performance in which Yong Sun emancipates her own body by embodying mental processes of the transnational adoptee. After a ritual of what she calls ‘de-dressing’, she starts a battle against dust, paper, and time, and attaches texts, textile objects, and sound to her own body. As the artist frantically wraps her body in white, she visualizes her role and identification as an adoptee in a Western society. This process raises questions about birth, becoming, trade, renewed body, consequences, truth, and the reclamation of lost culture.

The performance displays how the subject is framed and displaced within the scope of transnational adoption through an attempt to emancipate the adopted body by re-performing the circumstances of the process and the constant battle of the right to self definition for the adoptee’s self. The artist is at risk of being seen as ungrateful, as victimizing her position, and as being disloyal to the Western culture that integrated her. The performance uses rituals and theatre to frame the history of transnational adoptions, which is closely linked to the history of Western colonization, and emphasizes the structural suppression and injustices inherited from the past.

Yong Sun Gullach is a Korean-Danish artist and activist operating at the boundaries of performance, poetry, video, sound, and installation art. Her work investigates disruptions, re- and de-construction, and the disorientation that emerges from an exchange between the body, image, and the spoken word. Gullach has initiated and curated several art and literature projects in Denmark, Germany, and the Dominican Republic. She holds an MA in literature from the University of Copenhagen, and an MA in media from the New School University, New York.