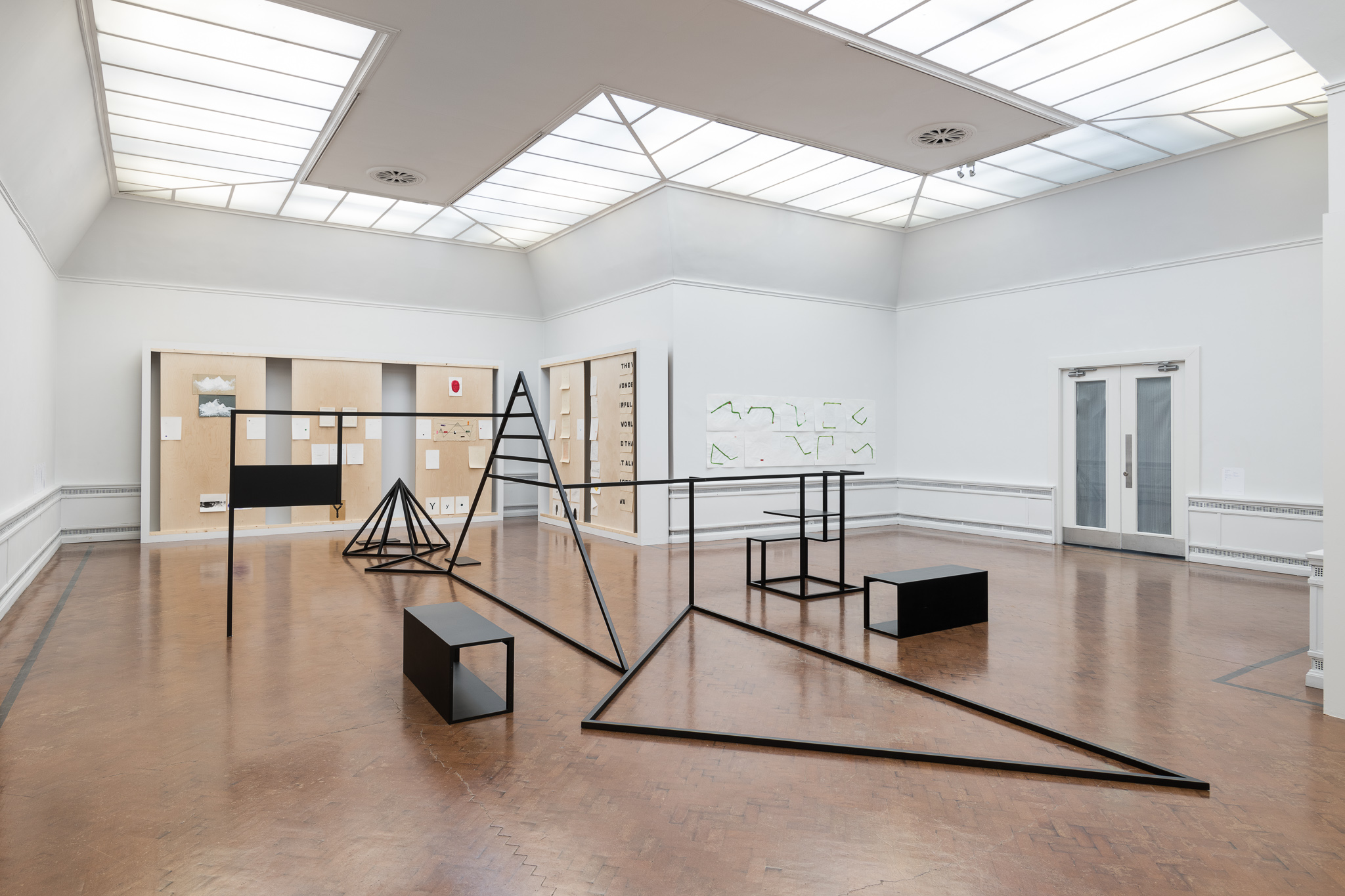 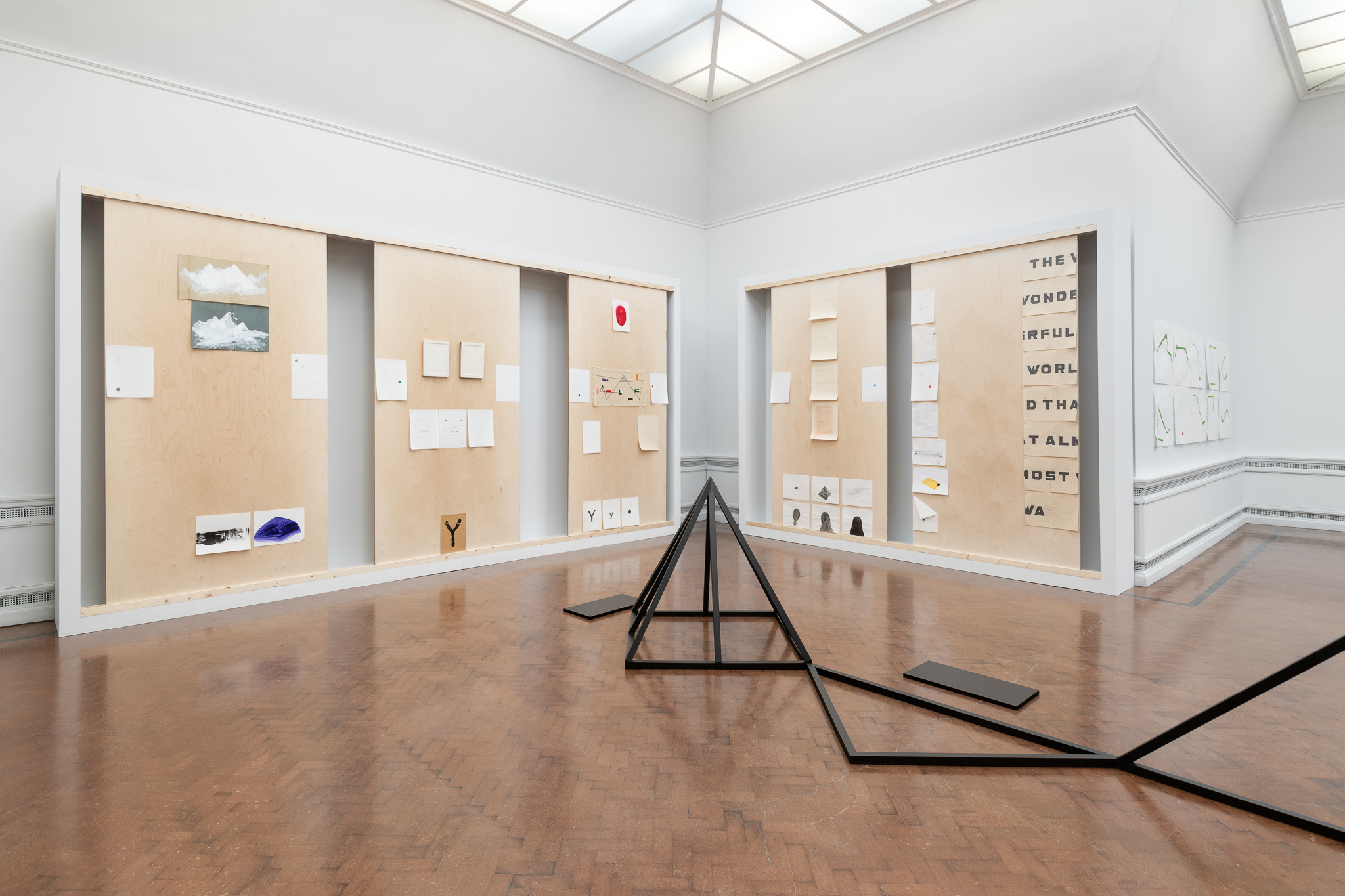 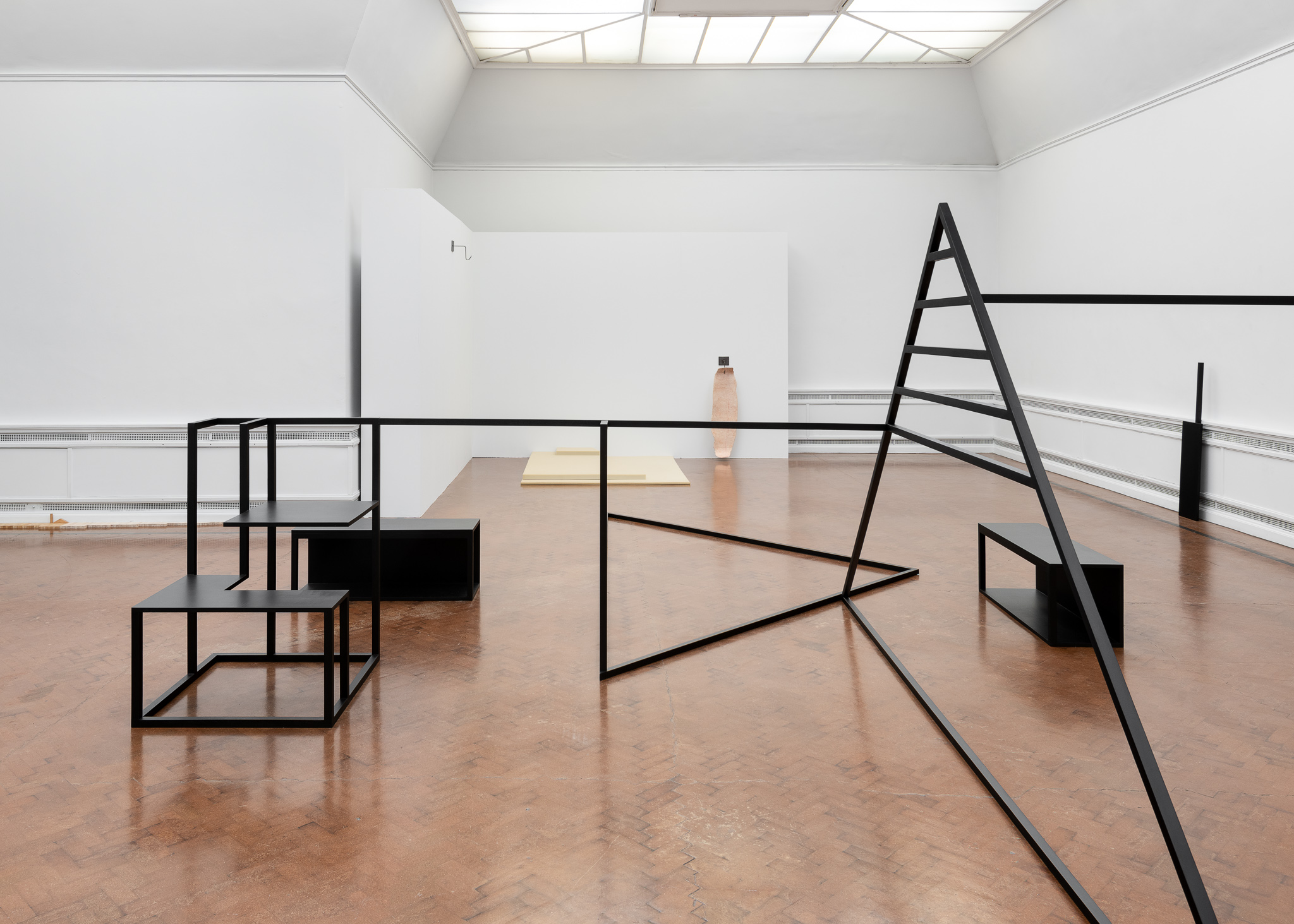 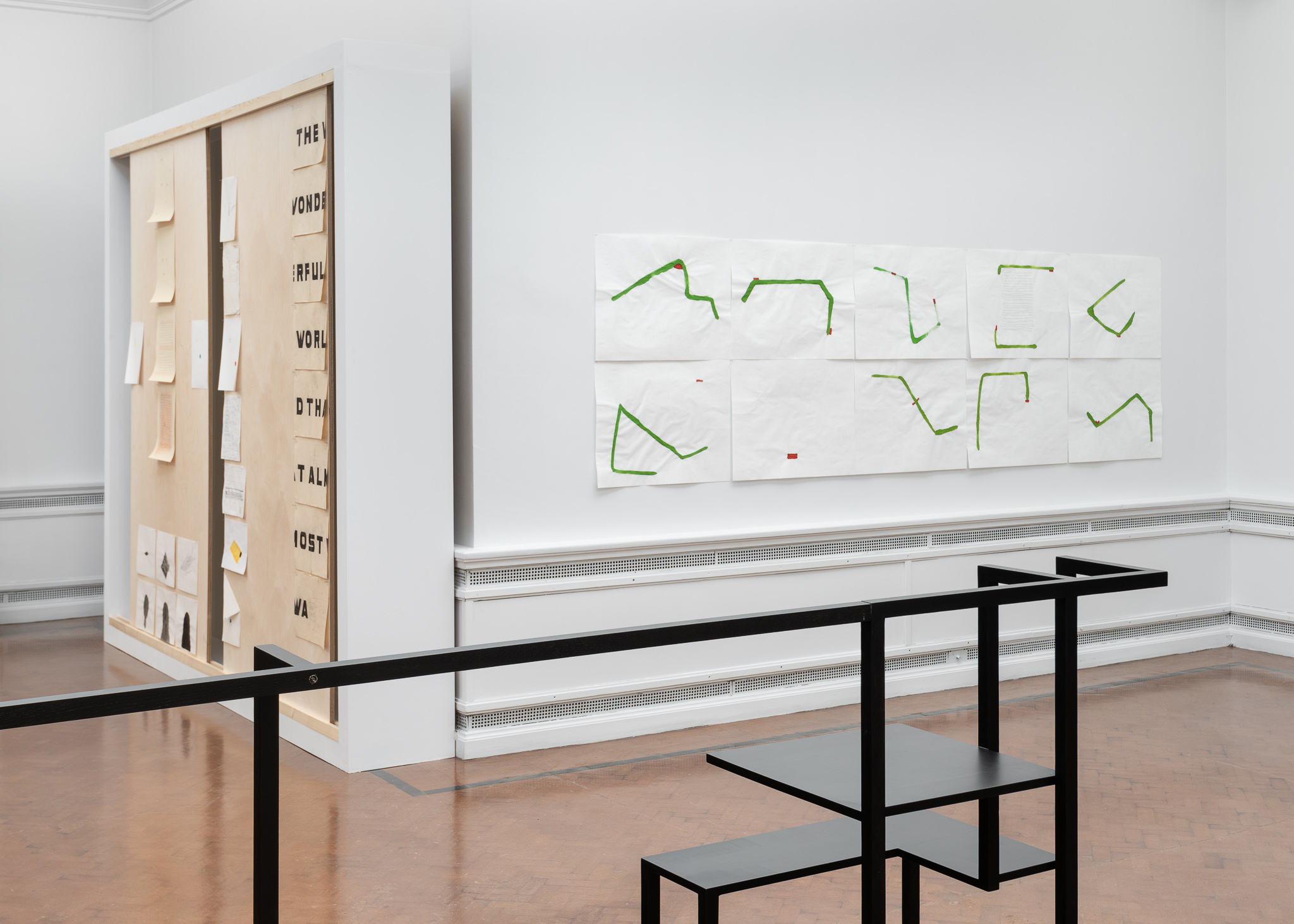 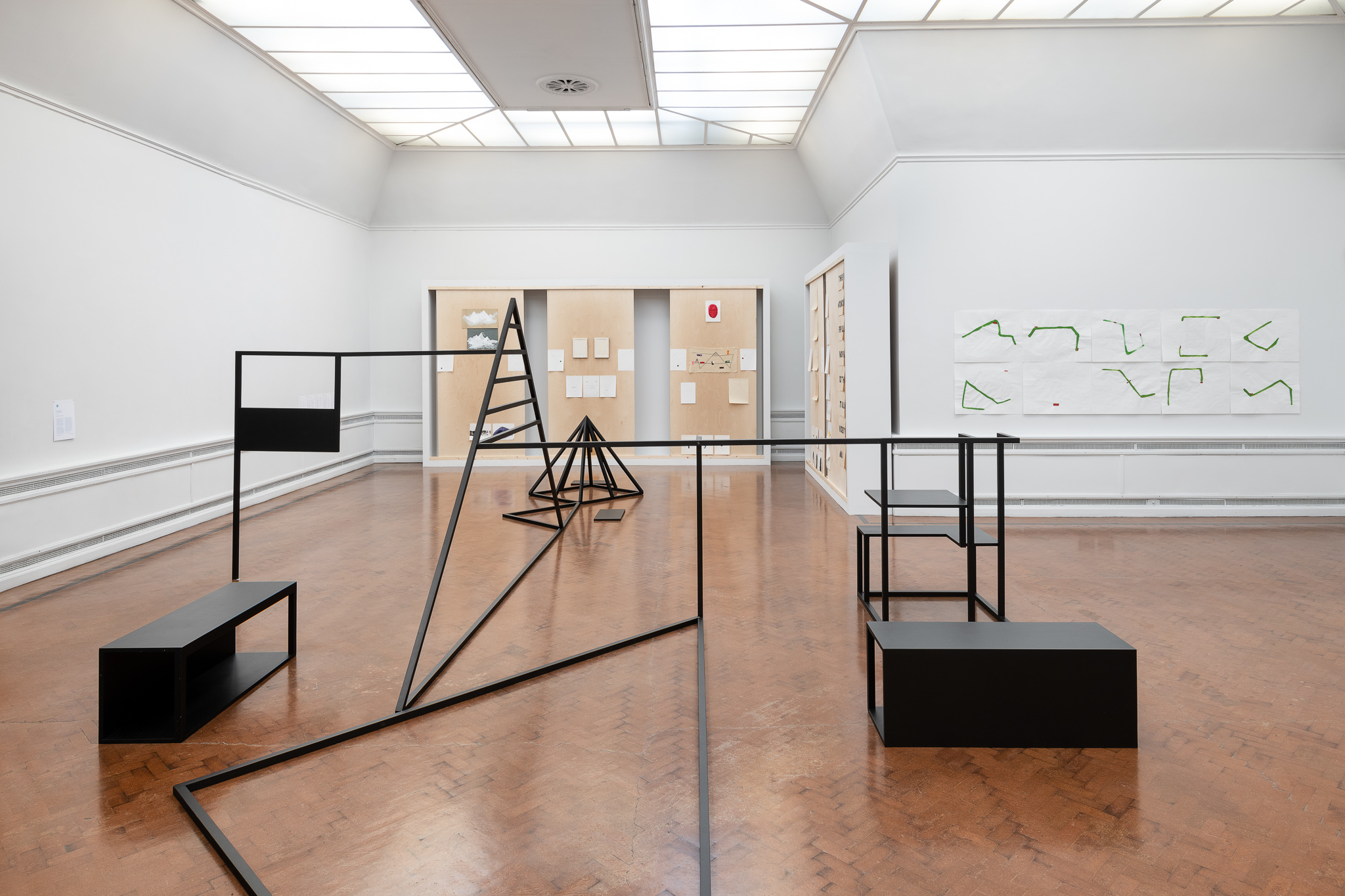 The installation Personal Object assembles Calovski’s recent and earlier works alongside objects from his archive. The work is reconfigured for its presentation at the historic East Gallery of the Limerick City Gallery of Art and as a space for connecting individual histories and collective experiences, both past, and present. Rather than transforming the physical space to serve the needs of the installation, this new configuration carefully interacts with the architecture of the space.

The works included in Personal Object similarly propose avenues of non-choreographed interaction with the visitors. For instance, Embroidery (2020) anti-hierarchically oscillates between a structure to sit or lean on and a personal document. Composed of selected drawings by the artist, as well as notes from Calovski’s father—the poet, translator, critic, and radio journalist Todor Calovski—pinned on five wooden panels, Closet formally defies boundaries, and nests the permeable story of his life and the city of Skopje within American artist Paul Thek’s “The wonderful world that almost was” and Polish architect Oskar Hansen’s “Open Form” teachings—whose 1966 Skopje contemporary art museum proposal was never realized. Calovski’s mother Biljana Calovska’s embroidery from the early-to-mid 1970s—the inspiration behind the eponymous sculptural piece—is installed within Closet (2020). Bed (2020), referencing his mother and her enthusiasm for working while lying on the floor, and Toy (2020), a reinterpretation of simple wooden toys with a process-oriented approach, harken back to Calovski’s childhood, while Personal Object (2017-2018), suspended sculptural installations made from rubber and cosmetics that once belonged to his mother, confronts the audience with an eerie convergence of domesticity and alternative teaching methods.

Yane Calovski’s participation forms part of Little did they know, the Guest Programme of the 39th EVA International, curated by Merve Elveren.

Biography
Yane Calovski is an artist, researcher, and cultural activist based in Skopje and Berlin. He is a graduate of PAFA (1996) and Bennington College (1997). Calovski attended studio programs in CCA Kitakyushu, Japan (1999–2000) and Jan van Eyck Academie, the Netherlands (2002–2004). He co-founded ‘Press to Exit’ Project Space, a platform dedicated to artistic research and curatorial practices, with Hristina Ivanoska.