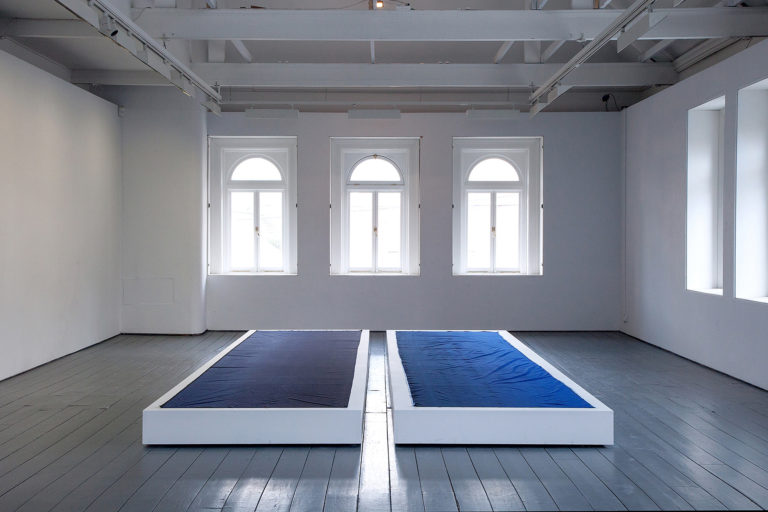 Willem de Rooij’s practice is influenced by a reflection on the conditions of the exhibition space and of institutional practice, and is often a visual study on the triangular relationship between early global trade, intercultural conflict, and mutual attraction. In light of this interest, he has worked, for instance, with groups of objects originally produced to represent the establishment and to decorate those in power. Through their high-material – and sometimes religious – value, these objects confirm the existence of prevailing power structures existing at a certain point in time. Central in his work is the selection and combination of images in a variety of different media, which range from sculpture to photography, film, and texts. De Rooij analyses conventions of presentation and representation, constructing tensions between historical, political, and autonomous sources.

Throughout his career, he has produced artworks that manifest an aversion to and at the same time dependence on visual references. This contradiction is already illustrated in the early film installations made with Jeroen de Rijke, his collaborative partner at that time. The films probe the possibility of ‘referentiality’ in art by seeing how many references can be inserted into a single work. According to De Rooij, the aim was to question why ‘so many works seemed to lean very heavily on references and seemed to legitimize themselves by referring to other interesting stuff, be these artworks or any other reference in the cultural field’. Following this array of research, his recent exhibitions make use of existing objects and works of other artists.

For EVA International 2016, De Rooij has created a new work that is in counterpoint to an artwork that was previously produced together with Koyo Kouoh for the 2012 show Hollandaise at Raw Material Company in Dakar, Senegal. The previous work, Blue to Black, is a wax print, traditionally produced in Ghana. The new work, TKTK, is made out of cloth created using traditional Batik technique from Indonesia – a piece of fabric handprinted in Yogyakarta. TKTK and Blue to Black are shown together on two separate but identical pedestals in the same room.

The purpose of Hollandaise was to question the role played by fabrics in the decolonization of knowledge: fabrics told stories, family stories, stories of trade, of labour, of creativity, of skills. The concept for the exhibition stemmed from the long-standing commercial relationship between the Netherlands and Africa. The title referred to the colourful printed fabrics that are exported from the Netherlands to Africa, and are generally known in West Africa as ‘Hollandaise’ or ‘Dutch Wax’. Dutch textile companies, such as Vlisco, developed mass production and commercial applications for Indonesian Javanese batik in the middle of the nineteenth century, and found their largest markets on the Atlantic shores of Africa. Today, the bright and distinctive wax prints are regarded as typically African. Complex globalization processes thus created the constructed image of a certain Africanness.

Willem de Rooij (1969, Beverwijk, Netherlands) lives and works in Berlin. De Rooij studied art history at the University of Amsterdam and art at the Gerrit Rietveld Academie and the Rijksakademie in Amsterdam. He is currently the Professor of Fine Art at the Städelschule, Staatliche Hochschule für Bildende Künste, Frankfurt am Main. In 2014 he was awarded the Vincent Award Nomination, The Vincent van Gogh Biennial Award for Contemporary Art in Europe, Gemeentemuseum Den Haag, The Hague.