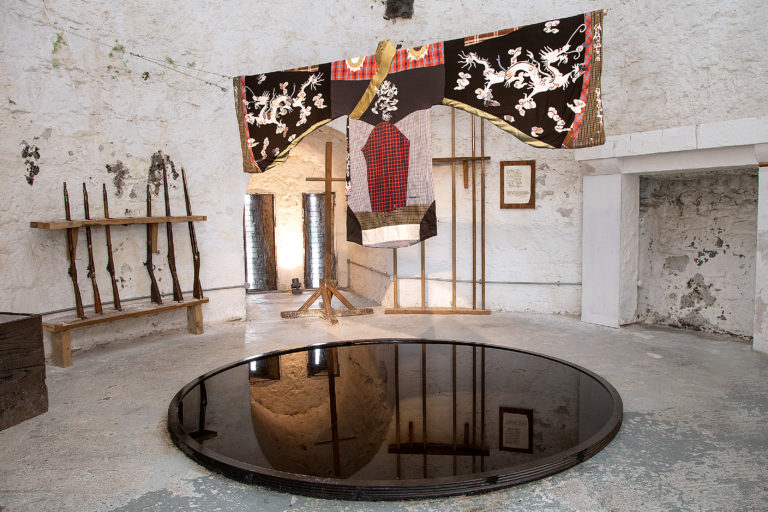 Born to a family of traditional embroiderers, Võ Trân Châu has inherited an understanding of the language of threads and materials. She works predominantly with textiles, using found fabrics, secondhand clothing, and deeply personal items that reflect the private histories of individuals. These singular narratives are interwoven to explore social, political, and cultural changes that have shaped contemporary society in Vietnam.

The term ‘water-image’, meaning a reflection on water, appears in a poem by Minh Mạng, the second king of the Nguyễn Dynasty (1802–1945). During this monarchy, the king assumed the position of ‘Son of Heaven’ and wore a ceremonial robe called a Long Cổn when offering prayers to heaven on religious occasions. The Nguyễn were the last ruling dynasty of Vietnam, and over a period of 143 years their reign was shadowed by China’s imperial menace, French colonization, and Japan’s fight for territorial power. The dynasty ended with the establishment of Vietnam’s Communist Party when the Nguyễn themselves became civilians.

A number of Nguyen descendants now live with a kind of unresolved inferiority –some live in poverty, some in wealth, while others have scattered from Vietnam to France or former French colonies. For EVA International, Võ Trân presented Water-image (2015), an installation informed by this history. She reimagined the ceremonial gown and recreated the Long Cổn using clothes that have been donated by descendants of the Nguyễn dynasty. By deconstructing and then reconstructing the clothes, not only does she make a new garment but illustrates personal stories to produce a multidimensional history.

Hanging in the air with sleeves outstretched, the garment adopts a position that suggests protection but also implies surrender, resignation, and helplessness. The robe is suspended over a small pond in a confined space – representative of those Nguyễn kings who lived in confined mental and physical spaces, who presided over the entire country, and yet were powerless against manipulation. Alongside the robe, Võ Trân presents a light box depicting the items of clothing that were collected from the Nguyễn descendants. There is a poignant contrast between the lavishness of the past and the frugality of the present that offers further insight into the impact of political and social change on the culture and identity of Vietnam. Võ Trân presents a garment patched together from a number of single pieces, and these remnants reveal a history that continues to extend and multiply.