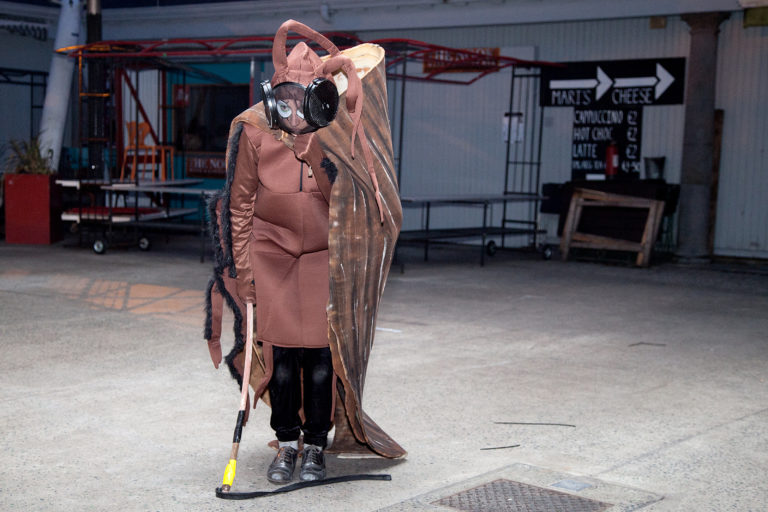 Tracey Rose’s work reflects the cultural, economic, and political differences that mark the contemporary world – in particular post-apartheid South Africa – as well as identity-related and ethnic issues. Utilizing multiple media, including performance, video, and drawing, she investigates questions concerning gender and colour through the visual motifs of her own body.

Rose belongs to a generation of artists charged with reinventing the artistic gesture in post-apartheid South Africa. Within this fold, she has defined a provocative visual world whose complexities reflect the social and political difficulties of the task at hand. Through a low-fi, DIY aesthetic, the artist brings characters to life that inhabit a number of different worlds, as varied as the many facets of a human personality. References to theatre and the carnival tradition place her work in the realm of satire, questioning and challenging the prevalent aesthetics of contemporary art, while also considering the emergence of a dominant cultural narrative of struggle and reconciliation in South Africa.

In her performances, which are often for the camera, Rose places her body at the centre stage. She inhabits roles given to Africans, to African women, and to women in a male-dominated world. In her quest to understand the source of these cultural stereotypes, she is inevitably drawn to religious myths of creation. The scope of her work is not limited to the boundaries of South Africa, but has found a global, humanist resonance. Rose’s artistic investigation has consistently engaged with the notion of humanity, a fleeting one at best, given the context from which she understands it. Her work is concerned with the role of blind nationalism and religious dogma found in her own country, but this also acts as a lens through which to understand the world around her, and the human condition within it.

For EVA International 2016, Rose developed a new performance and installation while on residency at IMMA | Irish Museum of Modern Art, Dublin, and also in Limerick. TERRABEAU (2016) is an installation based on a puppet show that uses hand, finger, and sock puppets as well as video footage of the artist’s son, Lwandle, in costume. The puppet show is both live and pre-recorded, and draws from one of the many horrific scenes from the 1966 Italian shockumentary Africa Adio, by Gualtiero Jacopetti and Franco Prosperi. The two primary characters/narrators of Africa Adio are Siamese zebras who have been chained and tripped-up by a group of white men. The zebra also references the a famous quote by Pik Botha, South African foreign minister in the dying days of apartheid: ‘South Africa is like a zebra, if you shoot the white stripe it will die, you cannot kill the white stripe without killing the animal …’ The script for the puppet show is developed using a template from a YouTube clip featuring bland commentary on Irish history.

Tracey Rose received her Bachelor of Fine Arts in 1996 from the University of the Witwatersrand, Johannesburg, and earned a Masters of Fine Arts from Goldsmiths, University of London in 2007. In February and March 2001 she was artist-in-residence at the South African National Gallery, Cape Town, where she developed her work for the 2001 Venice Biennale, curated by Harald Szeemann. In 2012 she was awarded the DAAD Artists-in-Residence Programme in Berlin.