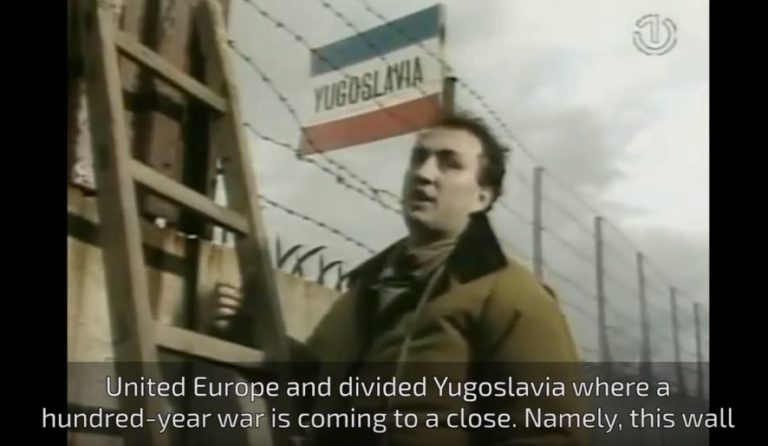 Towards the late 1980s and early ’90s, Top lista nadrealista incorporated political satire along with depictions of people’s idiosyncrasies in former Yugoslavia. The show became so popular that some of the language and phrasing used in the programme entered into the public vernacular. The TV programme often dealt with societal issues at that time in the build up to the Balkan Wars. In the video presented in the 38th EVA International, Nadrealista predicted what seemed farfetched at the time, and imagined that the country was divided into East and West Yugoslavia, with the boundary running through Bosnia so that Sarajevo was bisected by a wall. When portraying the rising ethnic tensions and imminent war in the Socialist Republic of Bosnia and Herzegovina, they used dark humour and absurdity and held strong paciﬁst attitudes. For instance, in one skit they enacted an escape from one side of the wall to the other, while guards threw rubbish at the escapees. In May 1992, ﬁghters in Sarajevo began attacking with real gunﬁre. The civil war had at that point already ravaged large areas of Croatia and inﬂicted devestation and ethnic cleansing on the multi-ethnic republic of Bosnia-Herzegovina.

Top lista nadrealista (The Surrealists’ top chart), also known as Nadrealisti (Surrealists) was a sketch comedy and variety show that aired on TV Sarajevo in three separate instalments from 1984 to 1991. Originating from a ﬁfteen-minute radio-comedy segment, it was broadcast as part of the weekly programme called Primus on Radio Sarajevo during the 1980s. The show was linked to New Primitivism (Novi primitivizam), a subcultural movement established in Sarajevo in 1983. Music, as well as comedy on radio and television, was its form of expression. Its three most prominent members Zenit Đozić (a Muslim-Bosnian) Branko Đurić (half Muslim half Serbian), and Nele Karajlić (Serbian-Bosnian) later departed the show and became respectively a media celebrity, an Academy Award Winning ﬁ lm director, and a revisionist nationalist author.