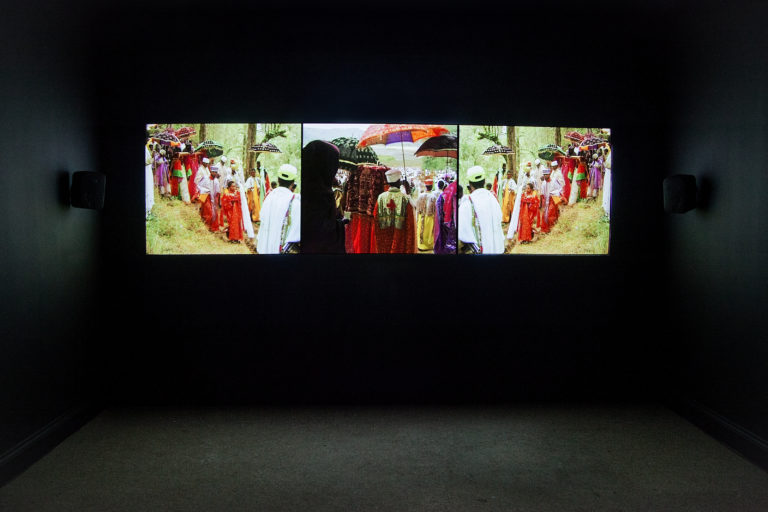 Theo Eshetu has worked in media art since 1982, creating installations, video artworks, and television documentaries. As a video-maker, he explores the expressive capabilities of the medium and how the language of television can manipulate an audience. Exploring themes and imagery from anthropology, art history, scientific research, and religious iconography, he attempts to define how electronic media shapes, not only our identity, but also our perception of the world around us. World cultures, particularly the relationship between African and European cultures, often inform Eshetu’s work. Though essentially conceptual, Eshetu’s work is grounded in compelling aesthetic components, often achieved through fractal repetition, such as kaleidoscopic mirroring, multiscreen projections, or the mosaic-like patterning of images. The primary subjects for several of Eshetu’s works are video’s formal constituents of time and light.

Trip to Mount Zuqualla (2005) is a video installation (a complex three-channels projection) of a pilgrimage shot in Ethiopia. Mount Zuqualla is an extinct volcano in the Oromia region. Both the mountain and its lake are considered holy to both Christians and the once-pagan Oromo – the single largest ethnicity in Ethiopia and the Horn of Africa – who live nearby. The lake in the crater has an island monastery that is the site of a biannual festival. The ambivalent attitude towards the holiness of the mountain is seen in the Oromo proverb: ‘Those who live far away worship it, those who live nearby plough it.’

Eshetu’s video documents the dialogue and coexistence of two belief systems: each year pilgrims come together to celebrate the moment of conversion from Animism to Christianity. With respectful distance and intimacy, Eshetu depicts the religious ceremonies of both parties, whose high point generates the celebration of the coming together of both groups. The video captures both crossover and cross-cultural creativity at its most aural and visual. The accompanying soundtrack is composed of hip hop, religious songs, and a Bach symphony to underline the differences and similarities of both pilgrim groups. A Coptic religious procession in the hills of Ethiopia is presented as a soulful, spiritual experience that is suddenly interjected by the beat of urban rap music. When the hypnotic effect of religious chimes gives way to harsh street music, we are inspired to consider the stark contrast between deep-rooted religious traditions and the world of hip hop and rap.

Eshetu creates an intense visual effect by presenting the film in a multiscreen format, thus enhancing the play between different colours and patterns. As viewers, the overlapping and repeating images gesture towards the hybrid experience of many diasporic artists around the world. The film highlights the intersection between past and present, the religious and the secular, the ancestral and the everyday – the meeting point between two distinct cultures.

Theo Eshetu is an artist who lives and works in Berlin. He grew up in Addis Ababa, Dakar, and London before establishing himself in Rome. Throughout the 1980s and ’90s, his work was shown at major video art festivals, and he received awards in Berlin, Milan, and Locarno. Eshetu has worked in media art since 1982, creating installations, video artworks, and television documentaries. In 2012 he was the artist-in-residence on the DAAD program, Berlin.