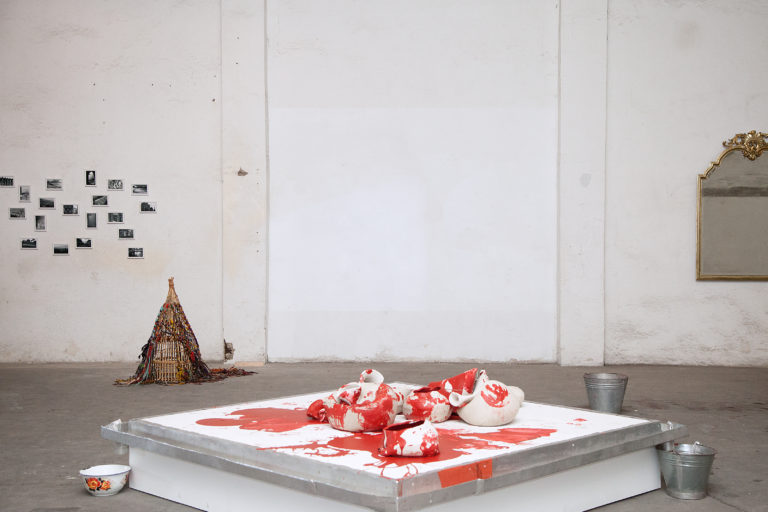 In her practice, Syowia Kyambi questions both perception and memory by examining the influence of constructed histories, cultural identities, past and present violence, colonialism, family, and sexuality. Her current work explores personal relationships and cultural identities, linking them to historical and social issues and imbuing them with concepts of loss and longing. For Kyambi, it is important for the audience to perceive energy in the work – the human body is used as a powerful transmitter to enable this. Objects hold energy; the body transmits, connects, and rejoins them. The performance is a trigger that leaves an imprint that remains as part of the installation. Her practice often combines performance and installation, using both impermanent and permanent materials, such as clay, sisal, mirror, sound, and photography.

In Kyambi’s works, she poses the question: In the twenty-first century, are references to the Industrial Revolution still valid? What is deemed good, what is considered right, what is wrong? Fracture (i) (2011) references the transformations in Nairobi in relation to its violent colonial history. How does one adapt to the fast economic transformations and the social norms the economies bear? The work takes the form of a performance, which has been recorded and projected in the space, and an installation. The objects that remain in the space are those used by Kyambi during the performance, and include pieces of pottery, a sisal costume, a dressing table, various objects (e.g., makeup, a wig, clothes), photographs, paintings, and various platforms, or ‘stages’, that represent different places and times.

The sisal costume was developed using the traditional weaving method the Kamba used for making baskets. With this material, Kyambi references both traditional local craft, as well as colonial sisal plantations that existed in the early twentieth century. The plantations were one of the many areas that enforced limitations on Kenyans, taking away their right to financial security and denying them power. The ‘entity’ that wears this costume during the first section of the performance is destructive and aggressive, taking on a colonial energy. The second phase of the installation-performance brings to life a contemporary woman named Rose, who comes from rural Kenya, an area of Kirinyaga, near Embu town, and wants to make it in the city. The photographs in the slide projection behind her dressing table depict Rose’s memories of her mother’s home and its surroundings. In the performance, Rose dresses for work, struggles to greet people, repeatedly falls down – symbolically stumbling on the remains of a past destruction. She mourns the past and attempts to reassemble the broken pieces of pottery. At the end of the performance she faces the past, forsakes the new role she had built for herself, and accepts feelings of sorrow and agony. It is through this process that she is able to rediscover her life.

Syowia Kyambi graduated with a Bachelor of Fine Arts degree from the School of the Art Institute of Chicago in 2002. She has been the recipient of several prestigious awards and grants including the UNESCO Award for the Promotion of the Arts; the Art in Global Health Grant from the Wellcome Trust Fund in the United Kingdom; a grant from Mexico’s External Ministry of Affairs; and commissions by the Kenya Institute of Administration. Her work is also included as a permanent installation at the National Museum of Kenya and various private collections.