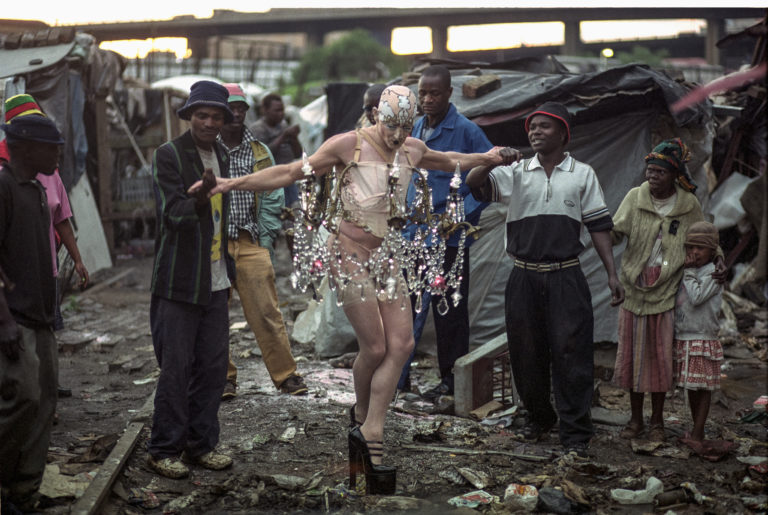 In his first performance of Chandelier (2001-02), Steven Cohen dressed in strappy high heels, was painted silver, wore a chandelier attached to a corset and visited a community of homeless people in South Africa. The site was a shack settlement in Johannesburg – which, unexpectedly, at the time of the intervention, city council workers were destroying. Part of the intention of the Chandelier project is to shed light on what is seldom seen, and the powerful video documentation of this first intervention accomplished that. The rough footage record is a strange visual; a white man in high heels wearing an illuminated chandelier tutu and improvising movement amidst a community of black squatters whose shacks are being destroyed by the city council workers, in their own ballet of violence. The soundtrack of the first intervention is as multi-layered as the visual record; the tinkling of the chandelier crystals, the bashing and hammering and falling tin, singing, the confused voices and animated reactions Cohen elicits. It is the unpredictable and diverse responses that people bring into the work, as well as the intimacy of those interactions, that make Chandelier both beautiful and grotesque.

Steven Cohen (b. 1962, South Africa) is visual and performance artist living in Lille, France. His works are staged in the public realm as well as in theatre and gallery spaces and are derived from his identity as a white South African gay male. Cohen participated in residencies at the Baryshnikov Arts Center and the Center or Performance Research in New York. Notable exhibitions include: ARS 11, Kiasma Museum of Contemporary Art, Helsinki, No Fashion Please: Photography between Gender and Lifestyle, Vienna Kunsthalle (2011); Dada South?, South African National Gallery, Cape Town (2009–10); and Under Pain of Death, Austrian Cultural Forum (2008).