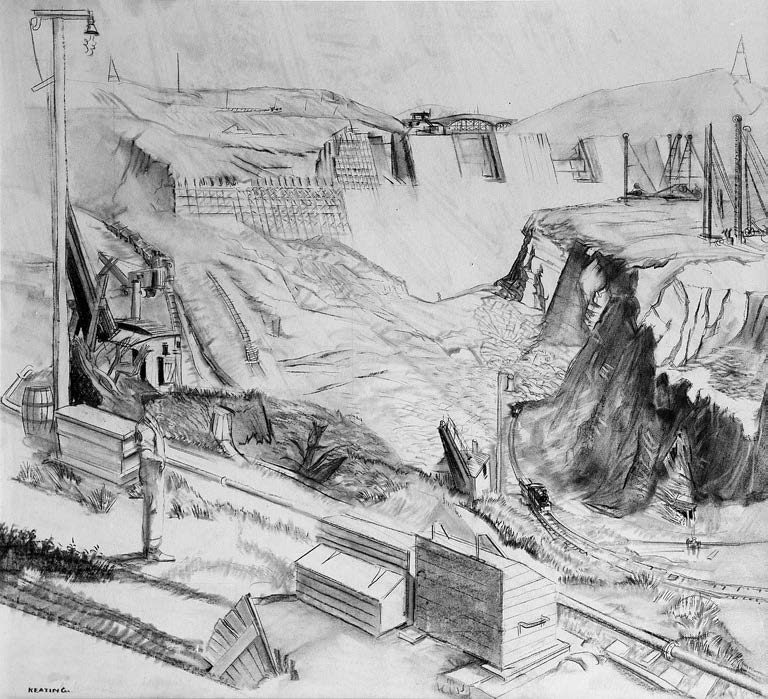 In 1914 Seán Keating travelled to the Aran Islands on the West Coast of Ireland. This trip had a profound effect on him, and he saw the hardworking men and women of the West as the true heroes of Ireland. The figure of the proud Irish peasant was popular in the writings of W. B. Yeats and others, and for Keating represented themes of immigration and the loss of past values. Nationalism became the driving force behind his work, and in it he depicted a heroic and sometimes idealized view of Ireland. After hundreds of years of rule by a foreign power, the new Free State showed it could independently and successfully realise one of the major engineering undertakings of the day: the Shannon Scheme project (1926–28). For Keating, the project at Ardnacrusha was analogous to his hope for Ireland as it emerged from its colonial past, and his allegorical, social-realist painting Night Candles Are Burnt Out (1928–29) attests to this: in the foreground a number of figures representing both the past and present are depicted; in the distance the enormous dam dominates the landscape. The work expresses Ireland’s pursuit for a new beginning through electrification and modernisation, as it unfolded before Keating’s eyes. For EVA International, the painting was presented alongside a selection of other works that depict the construction at Ardnacrusha. Imagery of grand industrialist machinery used to modify the soil and landscape is often abstracted, bringing to mind techniques and forms used by constructivist artists.

Seán Keating was born in Limerick, and moved to Dublin in 1911 to study at the Metropolitan School of Art under William Orpen. Keating felt his mission was to define Irish nationhood through his painting. Although abstract art thrived during his lifetime, he was a realist painter and remained a staunchly traditional one. In 1924 Keating received the gold medal at the Dublin Exhibition of Irish Art for his painting Homage to Hugh Lane, and in 1926 he was commissioned by the state to portray the development of modern Ireland through a series of murals, which was powerful record of the workers and of industrialisation, painted in a heroic-realist style. This included the mural for the Irish Pavilion at New York’s World Fair In 1939. He was president of the RHA from 1948 until 1962.