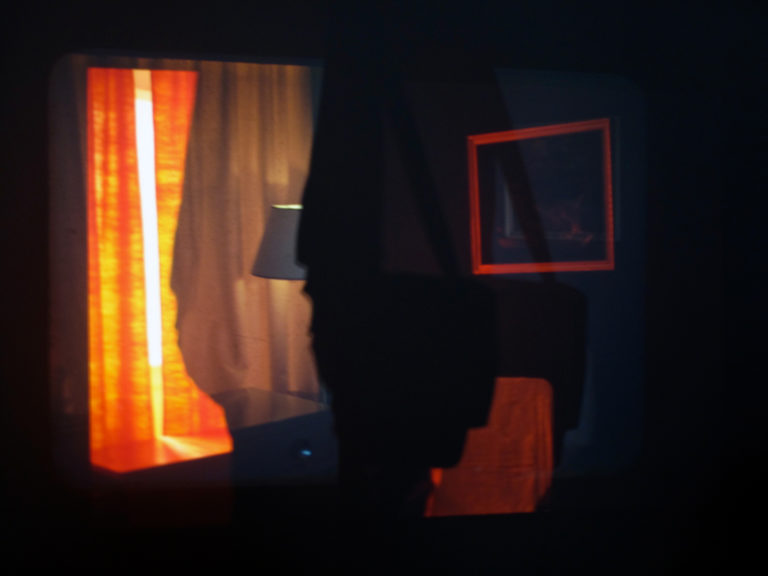 Here in silence
darkness and dust are gathering round this place
— then falling, taking the path
of least resistance

Sara O’Gorman’s practice involves the production and projection of 35mm slides. She is drawn to these found images, many of which have lost their original provenance. She facilitates the generation of new narratives, formed by the transformation of private familial images into the public sphere: a place where the viewer may become the author of someone else’s history.

Skyline Motel, Virginia, 1968 consists of an overlaid projection of two 35mm slides. One is a found image, the second is a mise-en-scène of the first. The viewer interrupts the layered projections, creating a third non-mediated space between the original image and the re-presentation.

The work connects the politics and poetics of memory, referencing Jacques Derrida’s Spectres of Marx, Andrei Tarkovsky’s 1974 film, The Mirror, and Ridley Scott’s Blade Runner. She exploits the distinctions between mechanically–mediated photographic recollections (preserved from the moment of origin) and the unreliability of neurological memory with all the natural lapses and misrepresentations that occur. O’Gorman aims to create a compelling sense of familiarity, where the images are simultaneously known and mysterious, and déjà vu blurs with the uncanny.