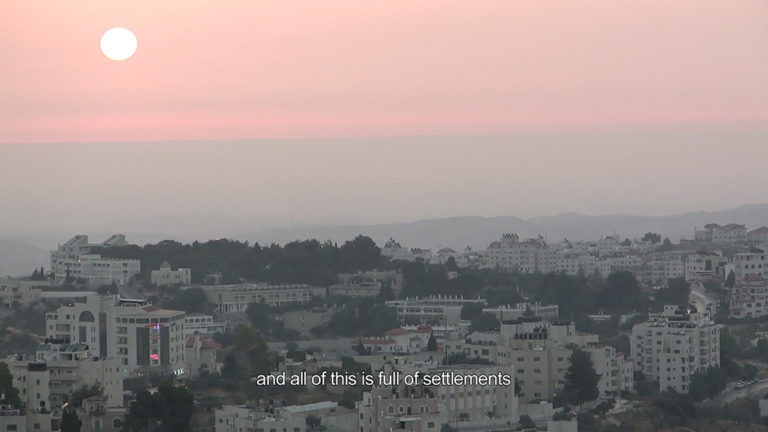 On both formal and conceptual levels, artist, actor, theatre director, and ﬁ lm-maker Dib challenges common notions of space and boundary, weaving together archival material, scripted text, and hypothetical circumstances to chronicle the political narratives of our day. Mondial 2010 (2014) is a ﬁ lm on love and place in which a Lebanese gay couple take a road trip to Ramallah, a Palestinian city in the contested territory of the West Bank, in a setting where homosexuality is a punishable felony. The ﬁ lm, which is like a travel log that is relayed through the couple’s conversations, is recorded with a hand-held camcorder and follows their journey that transgresses boundaries. It normalises the abnormal and in doing so creates an alternative universe of possibility. The relations between Israelis and Lebanese are governed by the 1943 Lebanese Criminal Code and the 1955 Lebanese Anti-Israeli Boycott Law, the former forbids any interaction with nationals of enemy states, and the latter speciﬁes Israelis, making a trip for a Lebanese citizen to Israel (or Palestinian territories) impossible.