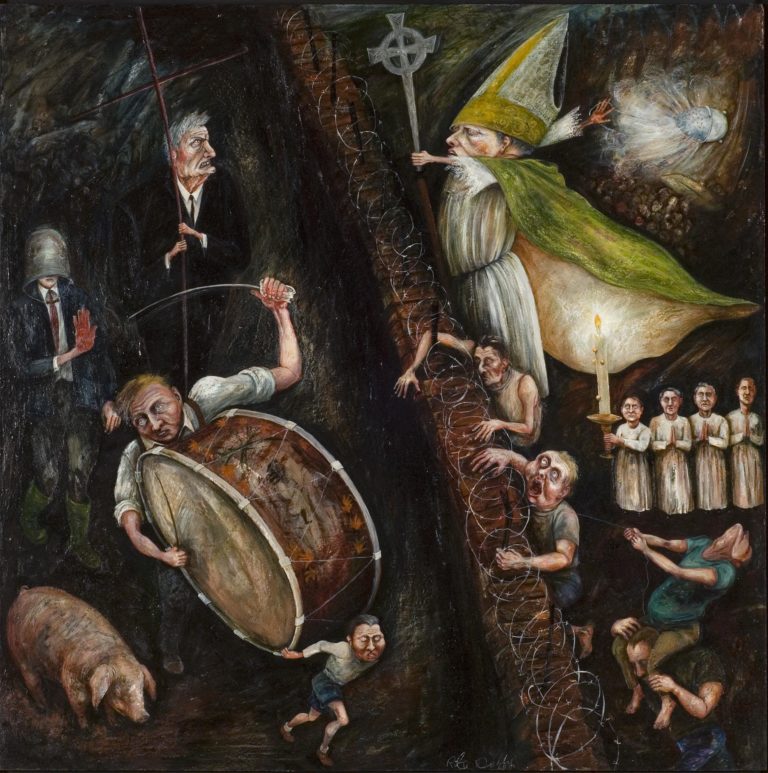 Dealing with a variety of themes from the domestic and personal to the political, Duﬀy’s work primarily began from the ﬁgurative and narrative tradition that recalls the work of Otto Dix or Georg Grosz in inter-war Germany — her characters are at times distorted or grotesque, starkly honest, and compelling. Siege II (1989) is a reﬂection on Northern Ireland’s social and political space — the deep cuts be-tween communities are reﬂected in the division of the canvas into zones, separated by barbed wire. Each side is like a self-contained, parallel world yet they are inhabited by the similarly deformed ﬁgures that appear even more outlandish owing to variations in scale. The work seems to suggest different patterns and connections that also highlight themes of separation or divisions of space, oﬀering a view of an antagonistic situation through the surfaces of paint.

Rita Duﬀy is an artist whose work concentrates on the figurative surreal tradition. Oft en autobiographical, her work includes themes and images of Irish identity, history, and politics. She has worked with Goldsmiths, University of London on an artistic ex-change with Argentina and Northern Ireland, looking at the role art has in post-conflict societies. Awarded a Leverhulme Fellowship 2009, she worked in the Transitional Justice Institute at University of Ulster and has lectured internationally on her work, increasingly preoccupied with international themes. Her 2016 Souvenir Shop project was selected for national commission; highly acclaimed it continues to travel internationally. Currently artist in residence in a former courthouse on the Irish border, she continues to explore issues of national identities, working in a speciﬁc border context, loaded with creative urgency in a world of increasing chaos and border obsessions. Duﬀy’s work exists in numerous public and private collections, in Ireland and internationally.