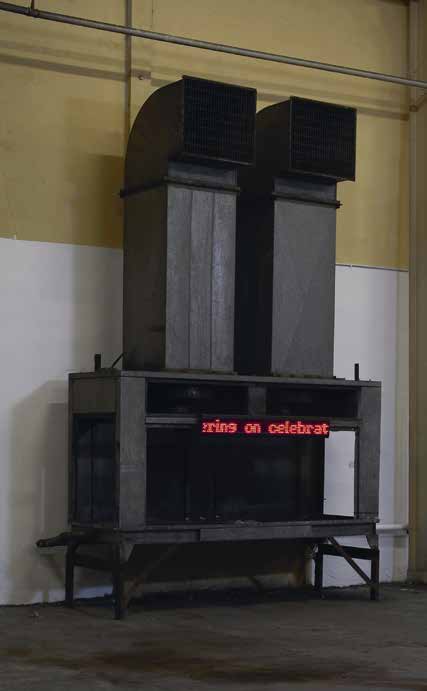 Hussein Minni Wa Ana Min Hussein is the first stage of a new episode within Rana Hamadeh’s ongoing umbrella project, “Alien Encounters”, which functions as a long term multi-faceted research into the conjunctions of the ‘legal’ and the ‘spatial’. This work is a script of an audio play that can only be accessed through a time-based text on LED displays, and whose audience is constituted actively through the act of readership.

The play, in three acts and several movements, interludes and commentary, is an attempt to decode and re-order the theatrical components that constitute the phenomenon of ‘Ashura’, taking the political, military and legal actualization of this theatrical phenomenon within the Lebanese and Syrian contexts as a field for commentary and research. Although ‘Ashura’ is a particularly Shiite phenomenon during which tens of thousands of men, women and children take to the streets to re-enact / re-witness the historical battle of Karbala in commemoration of the slaying of Imam Al Hussein (a highly regarded political/religious figure for Shiite Muslims and an allegorical reference to the figure of the oppressed), the artist treats this phenomenon as a structural dramaturgical framework that paradoxically underlies the entire politics of oppression in the region, primarily based upon minoritarian resurrective ideologies.

Hussein Minni Wa Ana Min Hussein departs from a claim that regards ‘justice’ as the extent to which one can access the ‘dramatic means of representation’ – the measure to which one can access ‘theatre’. How is it possible through this understanding, then, to script justice? To rehearse, orate, narrate, prop, weep, chant, choreograph, scenograph, or even spectate justice?