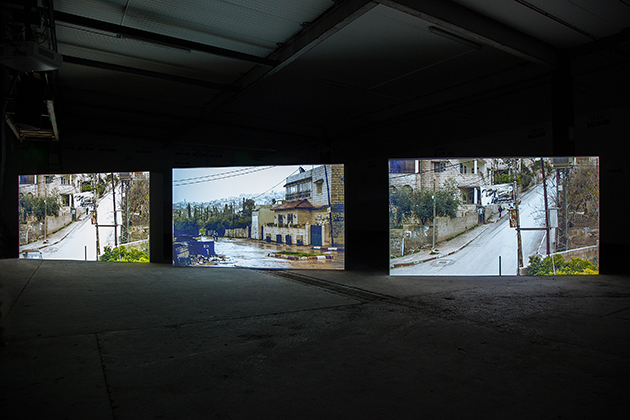 Public Studio is made up of Elle Flanders and Tamira Sawatzky, who both have backgrounds in photography, film, and architecture. Often working in collaboration with others, Public Studio’s multidisciplinary practice – which spans a wide range of topics including war, globalization, postcolonialism, and political dissent – results as large-scale public artworks, films, installations, lens-based works, and socially engaged projects. Their photographs and immersive film installations consider the relationship between ethics and aesthetics and the role of aesthetic judgment. Central to their practice is not just how to make meaning but how to make meaning matter.

In their most recent work, they address crucial contemporary issues; for instance, Migrant Choir (2015) was a choral intervention at the Venice Biennale in which twenty-two refugees sang three European national anthems (British, French, and Italian); Zero Hour (2015), a 360-degree projection in a custom-built geodesic dome, considers the effects of climate change in the southern hemisphere due to northern extraction (presented together with a newly commissioned poem by artist Etel Adnan); The Dialogues (2014), a series of films displayed in public spaces (subway-tunnel monitors and LED advertising billboards), focuses on revolutionary speeches or dialogue uttered in cinema over the last century; Drone Wedding (2014) is an eight-channel film installation that examines surveillance in our everyday lives; Visit Palestine: Change Your View (2014) is a work where they turned their art studio into a travel agency, which ran tours to the West Bank; and What Isn’t There (1999–2014) is an installation project that documents Palestinian villages that no longer exist.

Conceived while Public Movement were living in Palestine, Road Movie (2015) is a large-scale film installation that depicts a system of segregated roads that has been built as part of the Israeli military control over the West Bank. There are roads for Jewish-Israeli settlers and roads for Palestinians; hence, the roads are commonly referred to as the ‘Apartheid Roads’. Public Studio travelled these roads for six months, filming each one and the impact this system has on people in their daily lives. Shot in stop-motion animation and projected onto both sides of the three staggered screens, the installation unfolds like a filmstrip. Viewers are invited to cross between the two ‘sides’ of the work, the front and the back.

Public Studio, based in Toronto, is a collaborative betweem Elle Flanders and Tamira Sawatzky. Flanders is a filmmaker and artist who was raised in Montreal and Jerusalem and received a PhD in Visual Arts from York University, Toronto, in 2014. She is an alumnus of the Whitney Independent Study Program (1996), where she mentored with Mary Kelly and Martha Rosler. Sawatzky is an architect and artist. After working for the award-winning firm MJM Architects, she founded her independent practice, Public Studio Architecture. Together their work, which has received many awards, has been exhibited internationally.