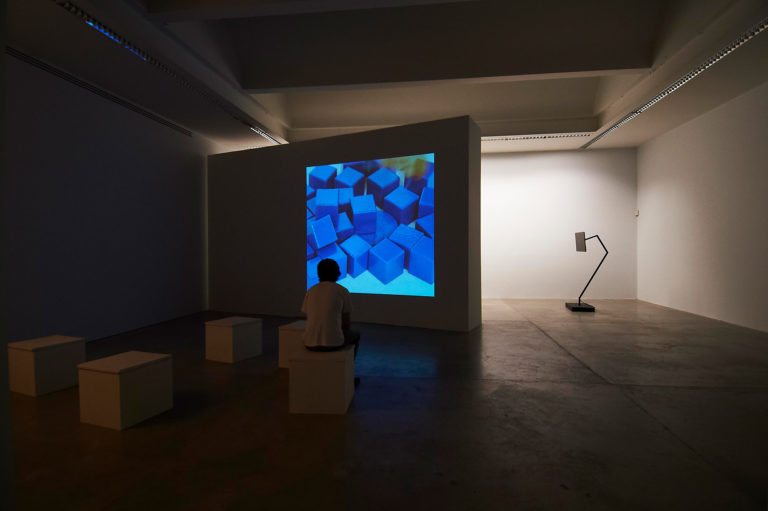 In Product of Play using colourful wooden blocks, a classic tool of psychology, Priscila Fernandes uncovers how toys are used as tests in a culture of monitoring; as well as how systems of discipline and control are masked by the structure of play and learning. Fernandes has a fascination with play and games due to their implicit function in preparing the modern individual for the coming productive society. She raises questions such as, what kind of society that will be and what are the resulting consequences of applying these methods of discipline and learning?

In the video work Product of Play we are invited as observers: a young boy plays with blocks; ordering, designing and looking for self-reassurance. Meanwhile, a girl prepares and waits to perform… creating a sense of trepidation, her young laugh morphs into a voice of classical precision as she turns her gaze towards the viewer.

One single rule in Calibration Circle dictates the choreography: the red circle, held by a white–dressed ballerina, must remain at the same place in the frame regardless of where the pirouettes take her. Interested in varying states of activity and passivity that the contemporary individual inhabits within the ideology of our casting society, Fernandes’ works struggle with the pressure put on individuals to be in a constant state of performance, and the expectation put upon them to perform.

Priscila Fernandes is a Portuguese artist based in The Netherlands. Exhibitions include Tensta Konsthall, Stockholm; Smart Project Space, Amsterdam; Museu da electricidade, Lisbon; Green on Red Gallery and The Lab, Dublin. Fernandes has won the prestigious “Prémio eDP novos Artistas”, Portugal and “Basicprijzen” from Prix de Rome, Netherlands. She was a guest-resident at the Prix de Rome studios, Rijksakademie, Amsterdam and at IASPIS, Stockholm, Sweden. She is a recipient of a “Startstipend” from Mondriaan Fonds, Amsterdam and the “O&O Subsidy” from Centrum Beeldende Kunst, Rotterdam.