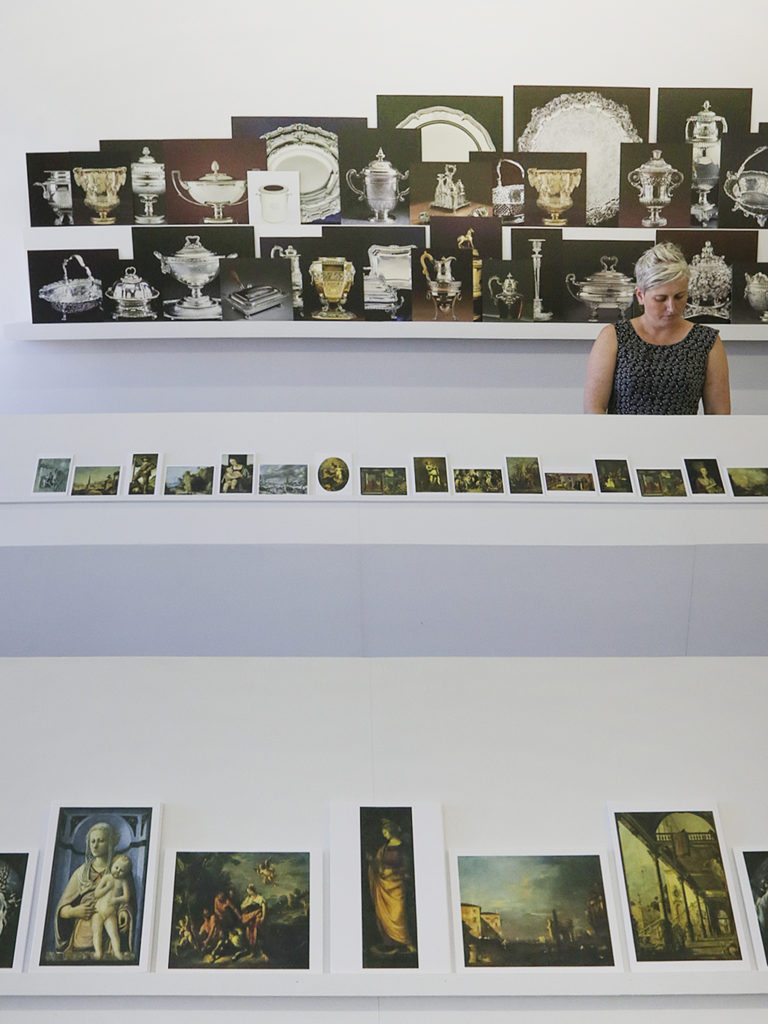 Pio Abad, The Collection of Jane Ryan and Willian Saunders: Postcard reproductions of Old Master paintings sequestered from Ferdinand and Imelda Marcos and sold by Christie's on behalf of the Philippine Commission on Good Government, 2016, digital print on postcards, unlimited copies, each 10.5 x 14.8 cm, photo: Deirdre Power, courtesy the artist

Pio Abad’s practice is concerned with the social and political signification of things. Working across drawing, sculpture, installation, and photography, he uses strategies of appropriation to mine alternative or repressed historical events, unravel official accounts, and to draw out threads of complicity among incidents, ideologies, and people. Often taking on the form of domestic or decorative accessories, his artworks glide seamlessly between these histories, enacting quasi-fictional combinations with fragments.

His research draws attention to the roles that certain artefacts have played in the recent history of the Philippines, specifically in shaping the cultural legacy of former Philippine dictators Ferdinand and Imelda Marcos and the postcolonial ideology they enforced under the auspices of capitalist democracies during the Cold War. Using inexpensive reproduction techniques, Abad recreates items from their lavish collection of Regency-era silverware and old master paintings of uneven quality and dubious provenance. Abad points to inconsistencies and incongruities in the postcolonial ideology that the couple sought to establish during their plunderous regime.

The Collection of Jane Ryan and William Saunders (2014–15) is an installation of two parts that includes a series of fifty-one photographs of Georgian- and Regency-era silverware that appeared in a Christie’s auction catalogue for the ‘Magnificent Silver’ sale in New York on the 10th of January 1991. The silverware was part of a large haul of artwork and antiques sequestered from the Marcos collection that was sold in an attempt to recoup the country’s losses from the couple’s kleptocratic reign. An original Christie’s document detailing the successful bids during the sale accompanies the photographs. This hoard of unused silverware reveals the true intentions of the Philippine dictators: behind their proclamations of postcolonial self-realization was the desire to establish a royal court, one fuelled by visions of European cultural heritage filtered through a Hollywood lens. An interpretation of the Communist flag is shown alongside the photographs, the workers’ hammer replaced with an auction gavel. The Christie’s sale was intended to fund the Philippine revolutionary government’s Comprehensive Agrarian Reform Programme, a land redistribution exercise aimed at quelling the country’s Communist insurgency.

The auction continued on the following day. Acting on behalf of the Philippine government, Christie’s sold paintings that had been acquired by the Marcos using ill-gotten public money and sequestered by new government after the pair were forced out of office in February 1986. The painting collection, which included works by Raphael, El Greco, and Titian, sold for a total of 15.4 million dollars. Abad has reproduced images from the auction catalogue to create ninety-eight different postcards so that each artwork is available to the public; the seized collection finally free for the taking.

Pio Abad is an artist who lives and works in London. He studied art from 2002–04 at the University of the Philippines in Manila before moving to Scotland to study at the Glasgow School of Art, where he received his BA (hons) Painting & Printmaking in 2007. In 2012 he received an MA in Fine Art from the Royal Academy Schools, London. Recent solo exhibitions include: Udlot-udlot (2016), Asia Art Archive, Hong Kong; South by Southeast (2016), Guangdong Times Museum, China; Metatextile: Ruptured Narratives, Exchanged Values (2016), Edel Assanti, London; Some Are Smarter Than Others (2014), Gasworks, London; and The Collection of Jane Ryan and William Saunders (2014), Jorge B. Vargas Museum, Manila. He has also participated in a number of group shows, including: CORRUPTION: Everybody Knows … (2015), e-flux, New York; Vexed Contemporary (2015), Museum of Contemporary Art and Design, Manila; Pre-pop to Post-human (2014), Hatton Gallery, Newcastle; London Open (2012), Whitechapel Art Gallery, London; Premiums 2011 (2011), Royal Academy of Arts, London; Bad Igloo Lust (2010), The Royal Standard, Liverpool; and Fears That I May Cease to Be (2010), Generator Projects, Dundee.