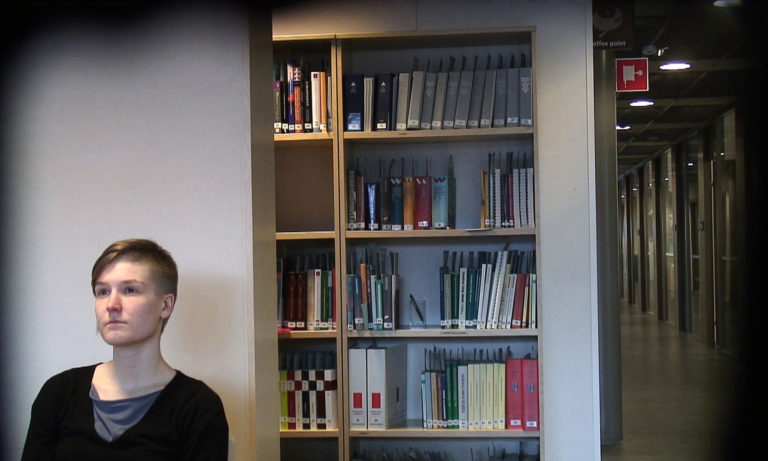 The Trainee was produced in a collaboration with Deloitte and Kiasma Museum of Contemporary Art. In order to realise the project, the artist worked for one month under an assumed identity, ‘Johanna Takala’, a trainee in the marketing department of Deloitte.

Initially normal-seeming ‘Johanna’ starts to apply peculiar working methods. Gradually she shifts from the position of someone others believe normal to the object of avoidance and speculation. We see the trainee sitting at her workstation all day doing nothing. These acts or rather the absence of visible action slowly make the atmosphere around the trainee unbearable and force her colleagues to search for solutions, inventing explanations for the situation. The videos and slideshow reveal a spectrum of ways of looking after the odd member in a group. One of the videos shows her spending an entire day in an elevator. Sincere interest and bewildered amusement is juxtaposed with demands directed at the superior regarding the strangely behaving worker.

Masking laziness in apparent activity, such as browsing Facebook during working hours, is considered acceptable behaviour in a work community. However, sitting in front of an empty desk with your hands on your lap, thinking, threatens the peace of the community and breaks co-workers’ concentration. When there is no ready method of action, people initially resort to avoidance, which fails to set their minds at ease when the situation drags on.

The inactive ‘non-doing’ person isn’t committed to any task/activity, they have the potential for anything. It is ‘non-doing’ that lacks a place in the general order of things, and thus it is a threat to order.