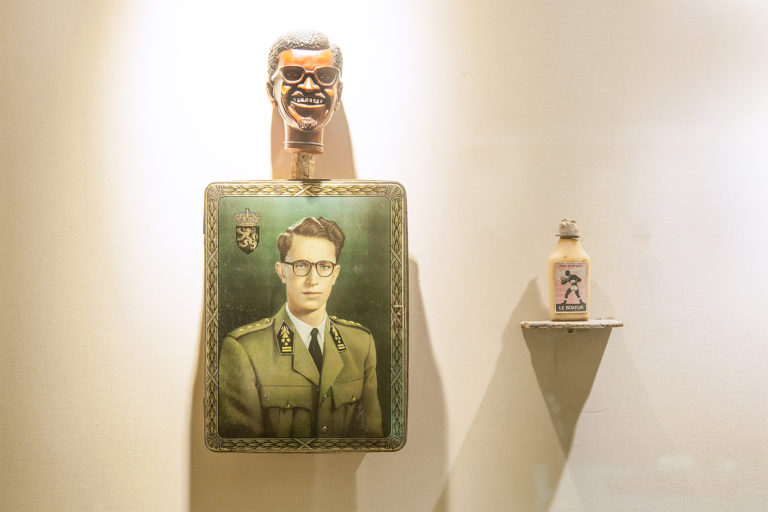 Philip Aguirre y Otegui makes sculptures, paintings, drawings, collages, prints, and installations. His sculptures are mostly made from traditional materials, such as bronze, terracotta, wood, clay, and plaster. Reflecting a profound sense of human tragedy, Aguirre y Otegui’s work frequently draws inspiration from political events, and above all from conflicts linked to migration and the human being as refugee.

With his sculpture entitled Fallen Dictator (2005) – which looks like a sculpture of a dictator that has been knocked down – Aguirre y Otegui refers to monument of King Leopold II, who colonized the Congo at the end of the nineteenth century. With his The African Dream (2004), another type of monument is questioned: the sculpture is a gold-plated football player doing the bicicleta or volley. The work is a reference to the football career as being the only dream, hope, and way out for many African boys.

An important and recurring subject in Aguirre y Otegui’s work is water. Water is vital for all human beings, but can also be used as an economical tool for power and a geopolitical weapon. In 1991 he worked on a series of etchings that proposed how to divide the water in the world in an honest way. In 2013 his monumental artwork Théâtre Source was inaugurated in Douala, Cameroon. In one of the most miserable slums of Douala, Aguirre y Otegui became fascinated by a drinkable water source where thousands of families came daily. Aguirre y Otegui transformed this site into a beautiful amphitheatre, which functions now as meeting place and village square, after considered improvements to both accessibility and hygiene.

Cabinet Mare Nostrum (Cabinet of the Mediterranean Sea), 2016, is an installation in which Aguirre y Otegui presents a selection of drawings, etchings, collages, models, and small sculptures made between 1990 and 2016 that focus on contemporary migrations. The installation was presented both at the Limerick City Gallery of Art and at the Hunt Museum,  inviting the viewer to think about migration, colonial conflicts, the issue of water, geopolitical issues, and the role of the artist.