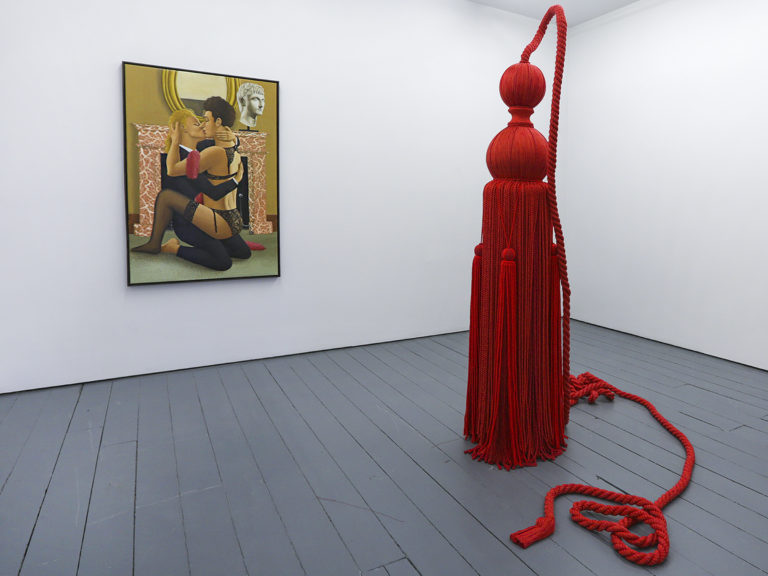 The family portrait, a classical trope of art history, and the way in which domestic and political structures replicate one another is fundamental to Patrizio di Massimo’s practice. Mum is a human-height curtain tassel, postbox red, attached to a veil of curtain with an ivy-draped pelmet. This is part of a family portrait titled Me, Mum, Mister, Mad (2014) which is made up of three parts: Mum, Mister and Mad. All three sculptural installations contain something alive, contrasting with crafted soft objects that refer to Di Massimo’s own family members. In another series of figurative paintings, which includes The Roman Kiss (2017), there is a renewed focus on the erotics of figurative painting. Playing on the well-worn ideas of the viewer as voyeur and artist as seducer, Di Massimo presents the subject caught unawares and litters his paintings with intimate clues as to their identity or the sources from which they are drawn. In his work, domestic or banal objects become uncannily alive by their outsized proportions, and act as reminders that what is familiar can often hide our darkest desires or fears.

Patrizio Di Massimo, a graduate of the Slade School of Fine Art, lives and works in London. Although using different mediums, Di Massimo’s work is primarily rooted in figurative painting. His recent solo exhibitions include: ChertLüdde, Berlin (2018); Rodolphe Janssen, Brussels (2017); Monteverdi, Tuscany (2015); and T293, Rome (2014). Recent group shows include: Take me (I’m yours), Hangar Bicocca, Milan (2017); Mundus Muliebris, CURA Basement, Rome (2016); I am here but you have gone, Fiorucci Art Trust, London (2015); and Don’t you know who I am, M HKA, Antwerp (2014).