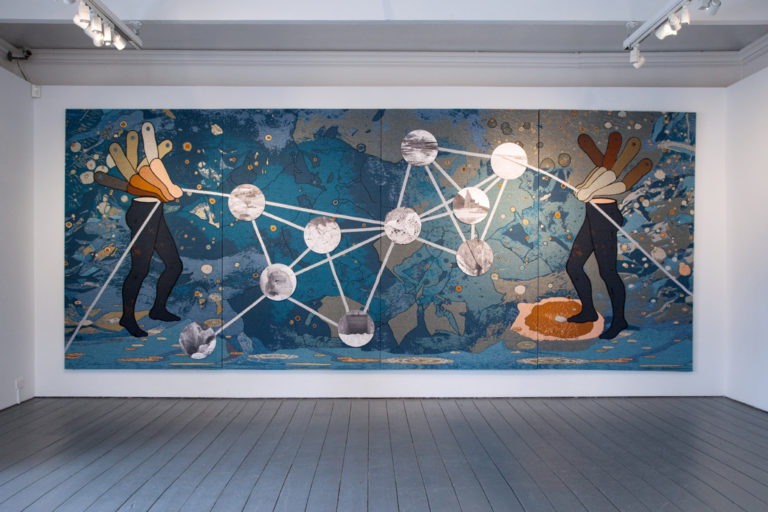 Otobong Nkanga’s drawings, installations, photographs, and sculptures examine ideas around land and the value of natural resources. Thematically connected through architecture and landscape, Nkanga’s multifaceted work not only encompasses photography, drawing, painting, sculpture, installation, and video, but also involves activities or performance. The artist uses her own body and voice in performances or videos, becoming the protagonist in the work. Her presence, however, serves mostly as a self-effacing catalyst, an invisible hand that sets the artistic process in motion. In many of her works, Nkanga reflects on the use and cultural value connected to natural resources, exploring how meaning and function are relative within cultures, and revealing the different roles and histories that exist, particularly within the context of the artist’s own autobiography and memories.

The Weight of Scars (2015) is a large four-panel textile piece with ten photographic images printed on Forex plates that have been fixed to the woven textile. Nkanga designed the tapestries for her exhibition Bruises and Lustre at M HKA – Museum of Modern Art, Antwerp, Belgium. The work relates to the heritage of a scarred, fractured landscape, the act of reconstruction, and the weight that comes with such a legacy. The ten circular photographic plates are images of what remains today of the former mined area in the northwestern part of Namibia, which today lies empty, abandoned, and even fenced off.

The images show details of cracked surfaces, holes in the ground and walls, massive abandoned concrete structures, pipelines cutting through the landscape, and so on. These residues of a once rich and fertile ground filled with the promise of a better economy and life are now empty and drained. The struggle for balance, repair, and renewal are constantly taking place in the world in which we live; our bodies and the landscape are entangled in this process. In her photography, Nkanga investigates the boundary between the documentary truth of photography and what lies outside of the frame and remains invisible. Everything that preceded the instant the artist took the picture, or happens after that moment, cannot be contained in the static image – the picture can therefore be considered a piece of evidence but one that doesn’t necessarily show truth. Nkanga wants to capture the changing world around her, and photography is evidence of human interference.

Otobong Nkanga is visual artist and performer who lives and works in Antwerp, Belgium. Nkanga began her art studies at the Obafemi National University Awolowo in Ile-Ife, Nigeria, graduating in 1994, before studying at the École Nationale Supérieure des Beaux-Arts de Paris, France, from 1995 to 2001. In 2008 she earned her master’s degree in performing arts at DasArts, Amsterdam, The Netherlands. She has been an artist-in-residence at the Rijksakademie van Beeldende Kunsten in Amsterdam, and from 2013 to 2014, she was a guest of the DAAD Berliner Künstlerprogramm – Artists-in-Berlin Program. In 2015 she was the recipient of Yanghyun Prize.