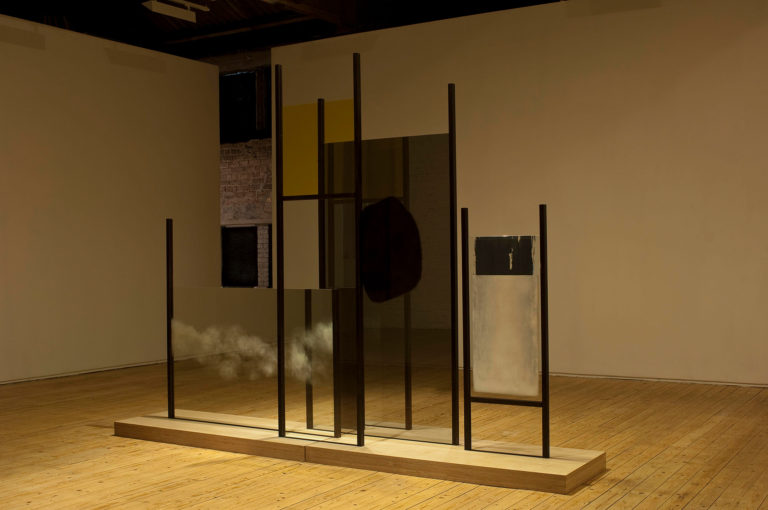 Niamh O’Malley is interested in issues of visibility and how the process of scrutiny can be marked; from the selection and framing of an image and its nature as a surface, to the point of materialisation where the subject has been transposed to another mode – and its ability within this to provoke present-ness.

Her earlier practice includes a series, Vignettes (2003-2008), which take the form of video projections on painted screens. Sections of the images become saturated as projected light aligns with painted pixels. These works have contrasting speeds, the stillness and the physicality of the painted surface and the real-time loop of recorded moments. Painting exists in a space of potential narrative and animation while
the cinematic is slowed and made solid. Projected figures seem to pass, almost spectrally, through the painted images,
and perhaps even through the history of the locations, and of the works – extended images.

O’Malley’s works continue to present this calm and extended ‘attention’ and the apparatus of production, the materiality, the viewer and the maker are always evident. In Model moving image is used to document stillness as the model repeatedly settles into, and holds a pose. There is a subtle and reoccurring shift from event to image within the looping and silent narrative. The double–sided framework of overlapping ‘windows’ in Screen, forms a second and rhyming glazed curtain to look at, to peer through, to be seen in and to be seen through. The sculpture’s negative solidity both deflects and absorbs, its individual elements become layered models or prototypes for mark making and viewing.