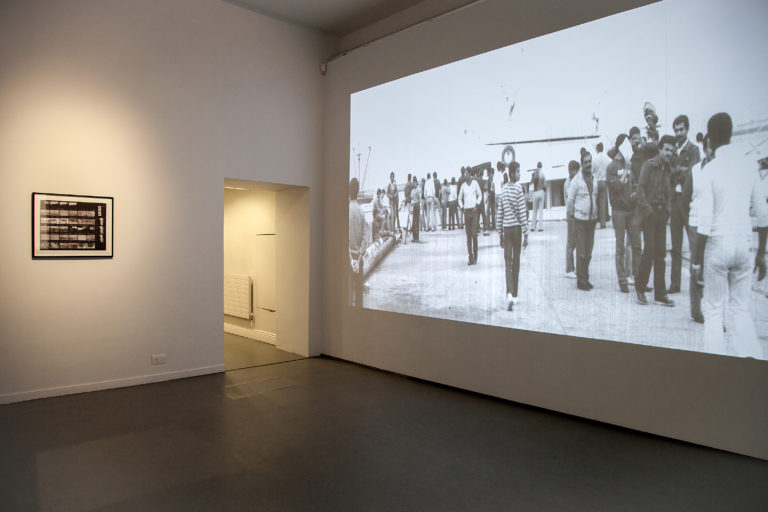 Naeem Mohaiemen is a writer and visual artist. Since 2006 he has worked on The Young Man Was, a history of the ultra-left in the 1970s, with a different medium used for each part of the project. Mohaiemen’s published essays include ‘Live True Life or Die Trying’ (Visual Culture Reader, Routledge, 2013), ‘Asterix and the Big Fight’ (Playing by the Rules, apexart, 2010), ‘Islamic Roots of Hip-Hop’ (Sound Unbound, MIT Press, 2008), and ‘These Guys Are Artists and Who Gives a Shit’ (System Error: War Is a Force That Gives Us Meaning, Silvana, 2007). The themes he has addressed in his work have been described as ‘not yet disillusioned fully with the capacity of human society’ (Vijay Prashad, ‘Take on Art’).

He uses essays, photography, film, and mixed media to research histories of the international left and the failure of utopian projects. In his work, Mohaiemen asks: What is the root of the utopian impulse to self-sacrifice by joining political movements? How do people put aside the weight of history, which can lean towards certain less optimistic outcomes, and continue to invest their hope in new movements – in an almost impossible optimism? What lies, in the end, within the capacity for imagining utopia, in spite of contrarian evidence? Mohaiemen has explored, in particular, Bangladesh, where has he met a diverse range of leftist activists – including anthropologists, historians, and journalists – who participated in radical movements in the 1970s and ’80s.

Abu Ammar Is Coming (2016) is a continuation of The Young Man Was (2006–present) project’s exploration of the 1970s revolutionary left as a form of tragic utopia. Previous chapters of the project have been shown at the 56th Venice Biennale (2015), the Museum of Modern Art (2014), New York, and the 10th Sharjah Biennial (2011). Abu Ammar was the nom de guerre of Yasser Arafat. His Fatah, a dominant faction of the Palestine Liberation Organization (PLO), fascinated Major Jalil, leader of the Bangladesh National Socialist Party (JSD), despite the more radical Marxist tendencies of the George Habash faction.

Naeem Mohaiemen is a writer and artist who lives and works in London and Dhaka, Bangladesh. He graduated with a BA in Economics (with a concentration in history) from Oberlin College, Ohio, in 1993, and was a member of the college’s Board of Trustees between 1994–96. He is currently a PhD candidate in Historical Anthropology at Columbia University and 2014–15 Guggenheim Fellow (film). He cofounded Visible Collective in 2004, a New York–based collective of artists and lawyers investigating security panic.

In his work, he uses essays, films, and installations to research borders, wars, and people who belong at the edge of postcolonial markers. His ongoing film project The Young Man Was (2006–present) considers the revolutionary Left as a form of tragic utopia. Films from this series have been shown as part of the 56th Venice Biennale (2015) and the Sharjah Biennial (2011); and screened at the Museum of Modern Art (2016); International Short Film Festival (2014), Oberhausen, Germany; DocLisboa (2014), Portugal; International Documentary Film Festival Amsterdam (2012); among others. In 2014, Kunsthalle Basel, Switzerland, hosted a survey show of this work, Prisoners of Shothik Itihash (Correct History), which was curated by Adam Szymczyk. His work has been published in various anthologies including The Sun Never Sets: South Asian Migrants in the Age of US Imperial Power (NYU Press, 2013). His work is in the collections of the British Museum and Tate Modern.