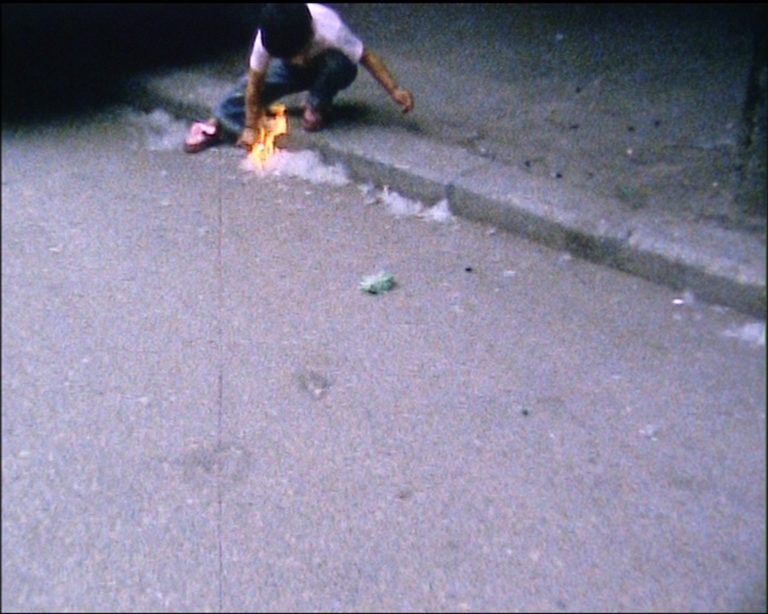 Scenes of past demonstration and protest are commonplace in Mona Vatamanu and Florin Tudor’s practice. Often engaging with specific sites of demolition and destruction that revisit turbulent periods in recent history, their work evokes a sense of the persistent failure to achieve the Utopian society we have long been seeking. Focusing on these locations, Vatamanu and Tudor respond to these sites with a process; on-site performances documented on film, photography and sometimes painting; providing a moment, a pause in which to consider concerns that extend from these specific sites to the universal, from history to the present.

Rite of Spring is a film piece documenting children as they burn mounds of white poplar fluff. This simple and poetic gesture implies a promise, the promise of renewal. Some are street kids, some have a family and some do not, some have a home, some are nomadic, and some just squat in derelict houses without roofs. Occasionally, the mesmerizing play of the children leads the fire to consume a tree and then firefighters rush to extinguish it, leaving the burned trunk as a black drawing on the sky.

The sparks and small fires in the film suggest the catalyst of change to existing orders; they recall the fires in the French banlieues in recent years, the perpetually deported and repatriated Roma people throughout Europe, anti-war protesters against the invasions in Iraq and Afghanistan, around the globe, uprisings in North Africa and the Middle East—all of which point to the hope of a more equal world.