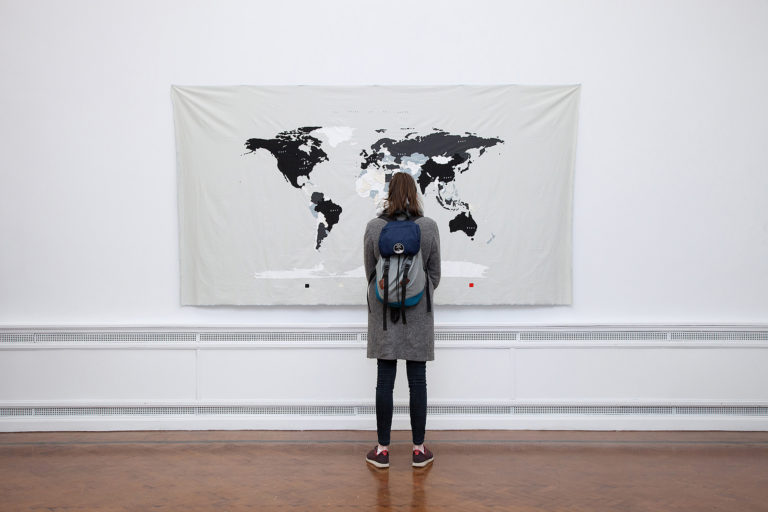 Mona Vatamanu and Florin Tudor have collaborated together since 2000. Their artistic practice spans a diverse range of media including film, photography, painting, performance, and site-specific projects. Vatamanu and Tudor’s broad practice has positioned them among the most compelling and literate interpreters of the contemporary post-communist condition, which extends far beyond their native Romania. Widely shown in Europe, Vatamanu and Tudor bring history into the present tense in the form of a performative reenactment or through symbolic recuperation. They share a deep interest in architecture as a repository of both personal and collective memory and as a mark of communist power that underlies many of their projects.

Vatamanu and Tudor do not impose on the viewer any preconceived social framework. Their practice involves the observation and scrutiny of material elements that surround us, often focusing on what is ephemeral, small, marginal (for instance, often overlooked matter such as dust, rust, fluff, soil). These materials can act as starting point from which to question social relations, economic change, or political conflicts. According to curator Joanna Sokolowska, their art provokes, ‘on one hand, a careful observation of details, and, on the other hand, the setting in motion of poetic associations’.

Le monde et les choses (2014) is a textile world map that Vatamanu and Tudor began sewing while working together in Singapore. This artwork is related to their research in statistics taken from various CIA studies published online. The map shows the domination of a few countries based on their main industries – some countries dominate because they export financial products or electronics and machinery, while most countries export resources, minerals, or labour. For Vatamanu and Tudor, this map represents the final stage of colonialism. The viewer can read the map through a specific colour code: green is for food and drink; red is for metals and minerals; brown is for wood; black is for oil, petroleum, and natural gas; pink is for textile and apparel; light grey is for machinery and transport equipment; blue is for electronics and ‘capital goods’; and white is for opium or ‘other’.

Le monde et la dette (2016) is a hand-sewed map of world debt. The darker colours represent countries with a higher debt and the lighter colours those with a lower debt. Some regions coloured in white represent geographic areas of unknown data. Red squares represent innate territories that cannot be regulated by debt and economics.

Mona Vătămanu and Florin Tudor have work together since 2000. Their artistic practice spans a diverse range of media including film, photography, painting, performance, and site-specific projects. Widely shown in Europe, Vatamanu and Tudor’s practice involves bringing history into the present tense and they are interested in looking at architecture as a repository of both personal and collective memory.