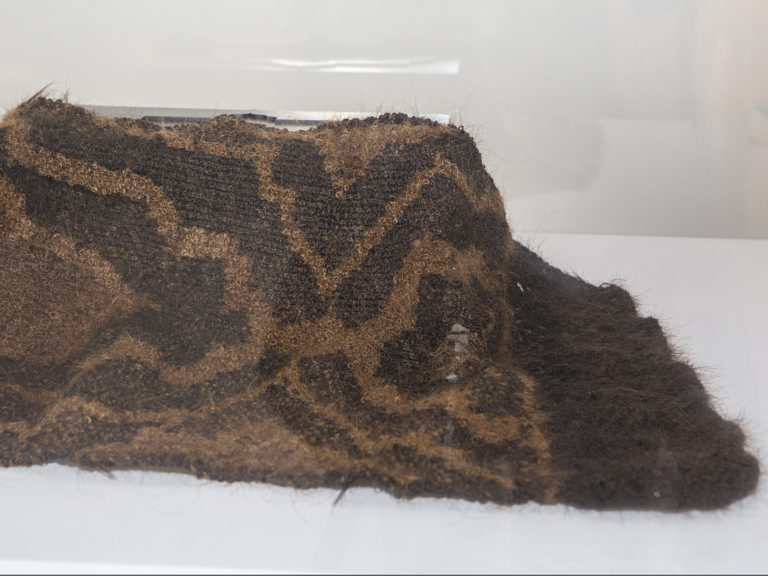 Mina Talaee explores the role of culture and its effect on humans as well as social and cultural issues to do with power and control. The Hair Headscarf  (2016) is a handwoven shawl made out of the artist’s and her mother’s hair. In Iran, females are obliged to cover their hair in public by the age of nine, regardless of their faith or origin. The work highlights the country’s cultural restrictions and obligations that are based on gender, and questions and challenges the forced control over woman’s body by the state. Talaee uses types of craft typically associated with women, such as kilim making and crochet weaving, which have been done in her family for generations. The pattern for the artwork is based on traditional Persian arabesque, commonly depicted in the margins of Ardabil carpets, a type of carpet that originated in Ardabil Province, northwestern Tehran, an area that has a long history of weaving. In the exhibition, Talaee’s work expands the dialogue of the role of the state apparatus upon the female body – either by controlling the surface of the body (through clothing restrictions) or the reproductive organs. Her work also calls attention to the deeply embedded traditions that are difficult to detach from. Talaee’s work, which includes a performance of the artist wearing the scarf outdoors, is a way to honour the women in her family.

Mina Talaee (b. 1985, Iran) is an artist and researcher. She has been exhibiting her work, which mainly focuses on political, cultural, and social issues such as gender equality and cultural hegemony, since 2003 in Iran, Europe, and the United States. Recent solo exhibitions include: Haft Negah Art Exhibition, Niavaran Cultural Center, Tehran (2016); Norouz Art Show, Galerie Nicolas Flamel, Paris (2014); and Monument to Poet, Shirin Art Gallery, Tehran (2013). She has also participated in a group exhibition at Galerie Nicolas Flamel (2016/17). Talaee has been a lecturer at several universities, namely, Soore University, at which she was also head of the BA/MA programmes for handicrafts, Islamic arts, book arts, and Persian painting.