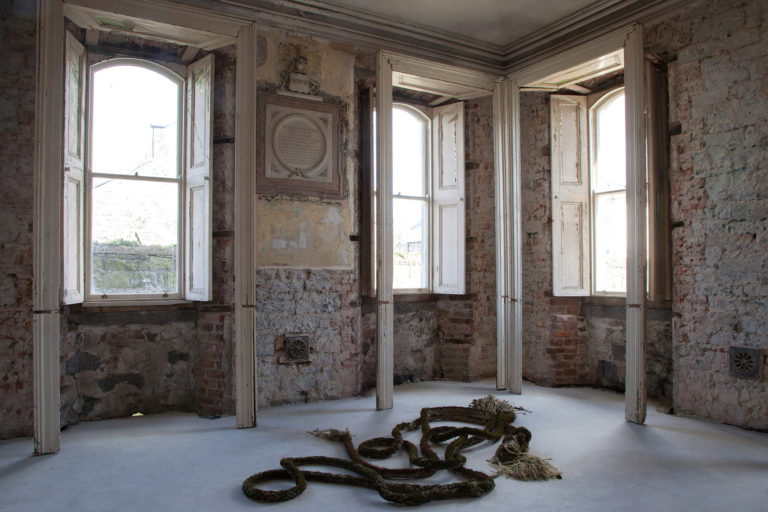 Michael Joo’s artworks investigate concepts of identity and knowledge in a hybrid, contemporary world. An American artist of Korean descent, Joo’s practice blends and collides seemingly disparate elements, such as science and religion, fact and fiction, high and low culture. Human intervention in nature – and the forms generated by these intersections – is a recurring theme of his work. Using a thoughtful and provocative range of materials, Joo juxtaposes humanity’s various states of knowledge and culture to address the fluid nature of identity itself, and prompts us to question how we perceive the world and the reasons behind this. Buddhism is a recurrent subject in Joo’s work. In his work Visible (1999–2000), the seated, transparent sculpture of a headless Buddha reveals its skeleton and internal organs. In his later work Bodhi Obfuscatus (Space Baby) (2005), the artist scrutinizes and dissects the visage of a third-century BC Gandhara Buddha, a piece from the Mr. and Mrs. John D. Rockefeller 3rd Collection, using live surveillance cameras.

This beautiful striped wreckage (which we interrogate) … (2016) involved a three-part installation in the Sailor’s Home, an historical building built in 1857 on O’Curry Street, Limerick. The multimedia project incorporated video projection, an intervention in the space itself, and sculptural representations of the building’s architectural details. The video projection situated on the upper floor of the space was viewable only from the mid-story staircase landing. The video was filmed in the British Museum, London, and shows a sculpture of an “emaciated Buddha” from third-century Pakistan, which depicts the human form of the Buddha Shakyamuni in his attempt to reach enlightenment through extreme asceticism.  Joo’s intervention in the ground floor of the Sailor’s Home involved using silver-nitrate to ‘mirror’ sculptural reconstructions of specific walls within the building. This process is based upon methods used in early photographic imaging involving chemically derived metallic silver. The third part involves the building’s decorative architectural details that were salvaged during the ongoing restoration. Joo displays several of these details as sculptures in the rooms on the lower floors. Ambient light from the video serving to illuminate the space.

Joo is interested in seeing the Sailor’s Home as analogous to a body. Its somewhat mysterious past yet undeniable importance to the civic and social history of Limerick makes it a place for possible alternate narratives to unfold. It is a kind of portal in time that, when combined with its original intended use as accommodation for seamen to stay in while they were passing through Limerick and its location at the outskirts of a growing and diversifying city centre, makes it a transient place, a place that is in flux. With the current regeneration, the building is uniquely situated at a moment of transition between the past and present, the new and the old – and like a body it can be considered to be in a state of becoming. On this significant anniversary in Irish history against colonial authority, Joo utilizes the Sailor’s Home as a site of transmission between Britain and Ireland. The work can be seen as symbolic of human potential – symbolic of local and more universal concerns.

Michael Joo lives and works in Brooklyn, New York. He graduated with a BFA from Washington University, St Louis, in 1989, and received his MFA from the Yale School of Art, New Haven, in 1991. In 2006 Joo was awarded the grand prize of the 6th Gwangju Biennale, Seoul, for Bodhi Obfuscatus (Space Baby), along with artist Song Dong, and he is the recipient of the United States Artists Fellowship (2006) as well as the John Simon Guggenheim Memorial Foundation Fellowship (1999).