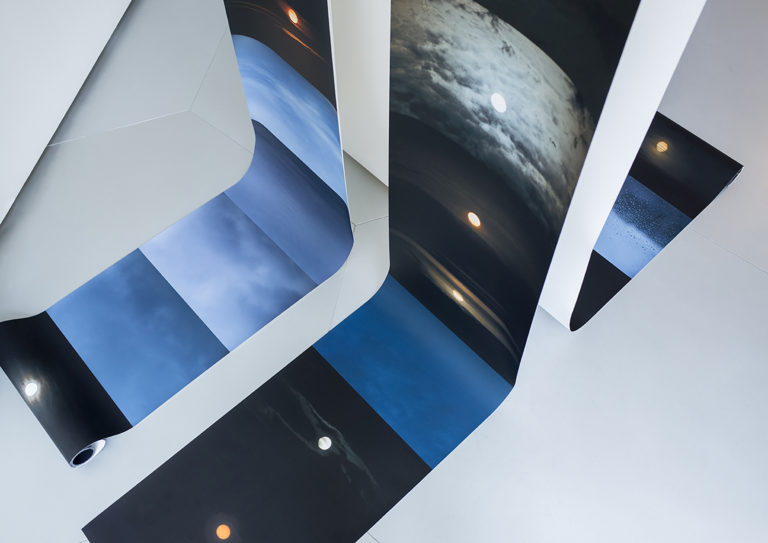 While working as news cameraman, Ono witnessed the speed with which stories and images appear and are then forgotten and how coverage of some stories, but not others, is discouraged by society and the media. Using photography as his central medium, he incorporates other mate-rials to expand the potential of photography beyond its traditional form. Ono’s work investigates photography and its relation to present time and space and may take the form of a durational work. Years within Years (I Love You Always) (2014–ongoing) is a work he intends to complete over the course of his lifetime. A photograph of the sunrise is taken each day as a way to acknowledge the uncontrollable nature of the world around us — as well as our own. In Ono’s words: ‘All the photographs I make are a failure and a success of some sort, one way or another. Photography reveals its best ability and inability when facing the sun.’ Each photograph is then transferred onto a canvas scroll containing the age of a person to whom Ono dedicates the work. The height of the installation is determined by the artist’s age in relation to his life expectancy at the time of each production. As time passes by, the future scrolls grow longer and fewer, and they hang a little closer to the ground. Though the project will eventually end, Ono has left instructions to let the last produced scroll lie ﬂat on the ground.

Masahito Ono creates installations, photographs, and films that explore memory, the human condition, geo-political boundaries, and the history the world has forgotten or ‘de-experienced’. Previously, he was a video journalist working for global media organisations for nearly a decade. Ono has participated in a number of exhibitions worldwide including: Push Pull, Arnold and Sheila Aronson Gallery, New York (2015); Auckland Festival of Photography, Auckland, NZ (2014/15); So Many Things Don’t Know, MUSEE F for The Month of Photography, Tokyo, Japan (2014); and Ping Yao International Photo Festival, Shanxi Province, China (2013).