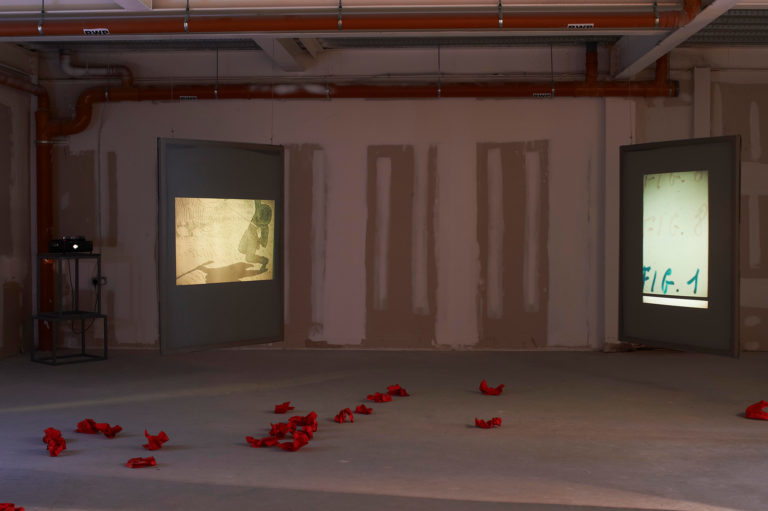 Marcel Broodthaers started working in slide projections from 1961 onwards. Ordinarily
a slide series functions as a didactic tool illustrating a line of reasoning, instead Broodthaers utilised the medium to present separate symbolic systems that manifest themselves as a story with an ambiguous meaning. In After the Future we encountered three Broodthaers slide projections: Sex Film, Images d’Epinal and Ombres Chinoises.

Sex-film, 1971-1972, consists of 23 transparent slides with handwritten notes, signs, symbols and abbreviations. The abbreviation ‘fig.’ utilised mainly in educational and scientific texts to refer to an image, is used by Broodthaers as an autonomous symbol. The image to which it is supposed to refer is absent.

Images d’Epinal, 1974, is named after the popular 19th century series of pictures from the Imagerie Pellerin in Epinal, France. Due to the proliferation of these pictures, Image d’Epinal has become idiomatic, meaning ‘a stereotypical image’ in French. The pictures are from a period when lithography was emerging as a means of circulating images to a wider audience. In this work Broodthaers plays with concepts of reproduction and original.

Ombres Chinoises, 1973-1974, consists of 80 slides featuring images from comic strips, the art world, adventure novels and popular scientific treatises, with drawings of natural phenomena, explosions, comets, volcanic eruptions and solar eclipses. Many of the images are from 19th century schoolbooks, exposing the history of our taxonomy and classification systems. Broodthaers takes them out of their context and rearranges them in a seemingly illogical sequence.

Marcel Broodthaers worked as a poet, writer, filmmaker, photographer, journalist and visual artist. Broodthaers founded a fictitious museum, the Musée d’Art Moderne, Département des Aigles, through which he organized exhibitions, publications, and films. Broodthaers was among the first artists to question the role of the institution, display, and text in an art object’s reception.