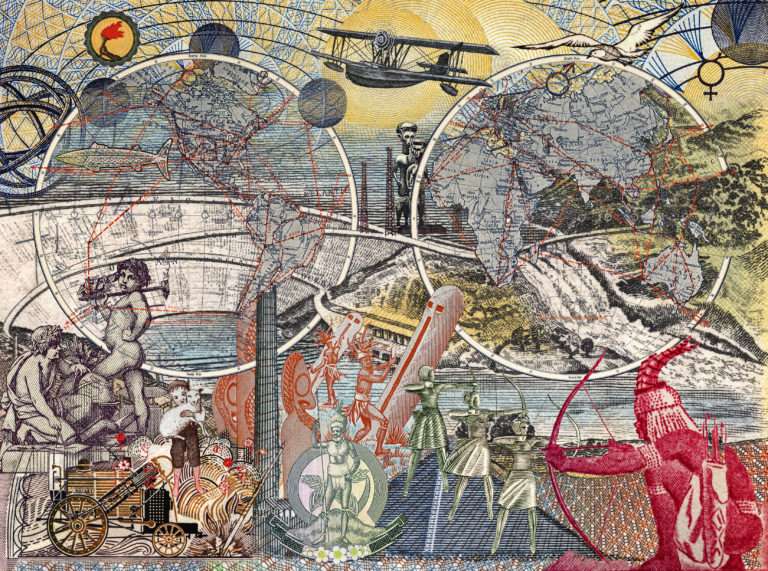 Malala Andrialavidrazana’s research focuses on the barriers and interactions within cross-cultural contexts. Primarily through photography, she uncovers the relationship between private spaces and more global issues to explore social imaginaries. Like an anthropologist, she examines the space between the past and present to produce an alternative way to tell stories or to write history. In her ongoing series Figures 1856, Andrialavidrazana uses elements and symbols found in regional and world atlases, bank notes, and album covers that marked her generation and reveals the economic domination inherited from a colonial past. Through her deconstructions and reconstructions of imagery, she envisions cartography as a means to convey our current situation, one that is gripped by the phenomenon of globalisation. For EVA International, Andrialavidrazana presented newly commissioned digital collages that expand on her series. The original materials sourced for Andrialavidrazana’s compositions highlight civic-engineer sites, such as hydroelectric dams that were often used by governments as emblems of progress and national pride – or even as state propaganda. The economic optimism in this imagery, and the inherent masculine heroism symbolised in the erection of the structures being depicted, appears distant from today’s often-dystopian view of society. Such optimism contrasts greatly to the reality of impoverished societies that still await industrial development and a fulfilment of promised futures that dams and bridges once represented.