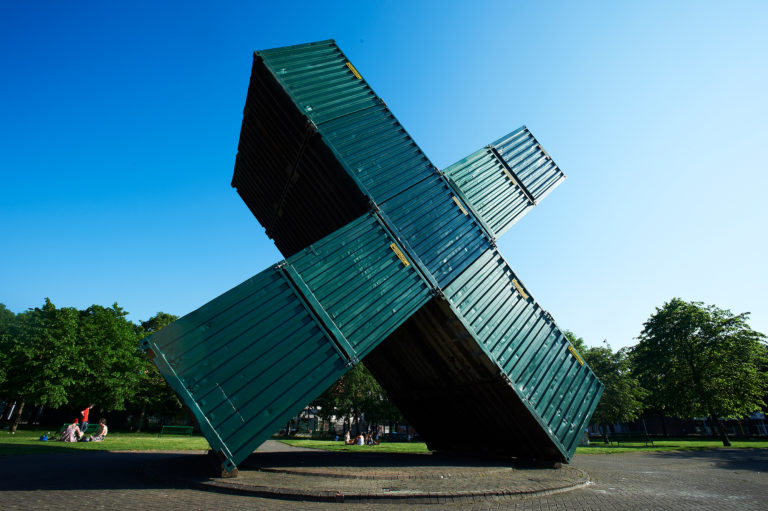 Luc Deleu is a Belgian architect and urban planner living in Antwerp. In 1969 he completed his architectural degree, creating T.O.P. Office in 1970 to question the role of architecture and urbanism in the modern age. His utopian projects put emphasis on mobility instead of the immobility of real estate, focusing on using urban space in a more efficient and intensive manner. In 1980 he created the Orban Planning Manifesto which for the first time, places emphasis on the responsibilities of architecture and building on a global scale.

Over the past four decades, Luc Deleu and T.O.P. Office have produced a rich and multifaceted body of work, consisting of architectural projects and urban schemes, as well as visionary proposals, specific objects and installations, and critical writings. Principally driven by the planetary dimension of human activity, Orbanism addresses the main questions confronting architecture and urban planning in the second half of the 20th and at the start of the 21st century, while entering into a critical dialogue with former utopian formulations.

“Deleu trained as an architect. Rooted in that discipline and logic, his early and mature artwork is conceptual, and continues to engage architectural principles, theories and practices, though in a paradoxical and iconoclastic spirit. He has a passion for cranes, containers, ready-made objects, which he dislocates into contexts that astonish and amaze, the way Gulliver both caused and experienced such wonderment.” Statement that accompanied the map of e v+ a 1994, Curated by Jan Hoet.

Luc Deleu is an architect, urbanist and artist. He graduated from the Hoger Instituut Sint-Lucas, Brussels in 1969. Since 1983 Luc Deleu has realised container installations in Switzerland, Belgium, France, Germany, Japan, The Netherlands, and Ireland for e v+ a 1994.