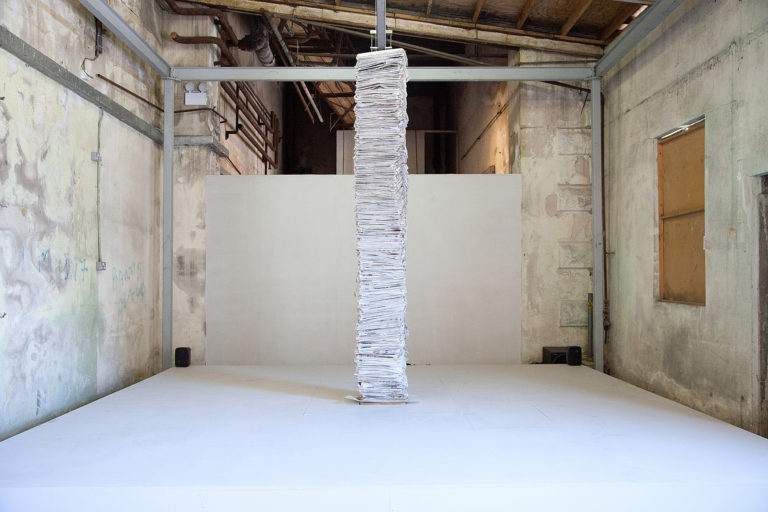 Leung Chi Wo’s reflective practice is concerned with the relationship between conception, perception, and understanding, especially in relation to site and history within cultural or political frameworks. Working with a range of materials, including photography, video, text, performance, and installation, Leung’s research interests include art, architecture, Hong Kong identity, and institutional critique. He has also been engaged in many collaborative projects such as Para Site, Hong Kong’s leading contemporary art centre and one of the oldest and most active independent art institutions in Asia. Besides his ongoing creative work with his long-time partner, Sara Wong, he has recently worked collaboratively with writers, curators, and anthropologists on experimental research projects.

Leung has been working extensively on the postcolonial status of Hong Kong in particular. He says: ‘There was a time when I was focused on what made up an identity, like the series of works I produced on Victoria, such as Peak of Victoria, which I made in 1998: five pinhole photographs taken at five different viewpoints at Victoria Peak in Hong Kong, or my 2008 video piece My Name is Victoria, in which messages from over 40 women named Victoria told the story of how they got their name were compiled into a monologue that became the voice-over to a video filmed during my journey walking along Victoria Road from Kennedy Town, from the border of Victoria – which was the capital of this former crown colony, named after Queen Victoria – to Aberdeen where the British landed for the first time in Hong Kong.’

Untitled (Love For Sale) (2014) consists of apparently unrelated visual elements about the Chinese diaspora, the civil rights movement in the United Kingdom, and the 1996 IRA terrorist attack in Manchester. When the viewer pushes a button (a gold sovereign coin minted in 1996 that depicts St. George killing the dragon on the visible side and Queen Elizabeth II on the other) it triggers a chain of actions: music plays, and a large column of stacked newspapers collapses before being reassembled via an electronic mechanism. The viewer cannot see both elements together because they happen in separate parts of the installation, in different rooms. Next to the button, there is a light box and an engraving on aluminium that reads, ‘No politics today!’ – a quote from a Chinese student who shouted this when Taiwanese singer-songwriter Deserts Chang held up a Republic of China flag on stage during her live concert at the University of Manchester in 2003. The image on the light box is the Free Trade Hall in Manchester, a venue for public meetings and political speeches as well as being a concert hall until 1996. The Free Trade Hall was an original site of struggles for democracy but was later sold to a private developer and turned into a five-star hotel, with only part of the original façade remaining. In Leung’s installation, Love for Sale by Ella Fitzgerald can be heard. Fitzgerald last performed at the Free Trade Hall on 8 April 1964, where Love for Sale was recorded with the Oscar Peterson Trio.

Leung Chi Wo graduated with a BA in Fine Arts in 1990, and an MFA in 1997, both from the Chinese University of Hong Kong. In 1996, he cofounded the Para Site Art Space, Hong Kong. He was granted a fellowship from the Asian Cultural Council to reside in New York City from 1999 to 2000. In 2001 he exhibited in Hong Kong’s first participation in the Venice Biennale. Leung now teaches in the School of Creative Media, City University of Hong Kong.